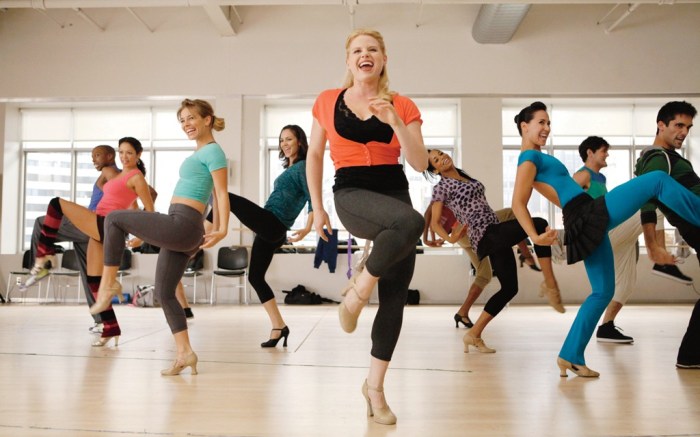 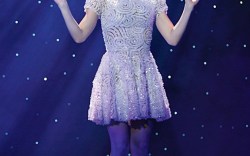 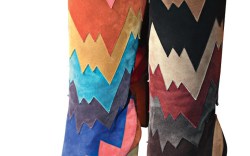 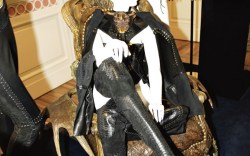 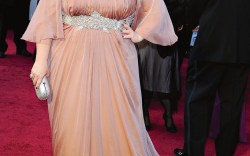 What were your footwear inspirations for the pilot of “Smash?”
“Most of [the footwear for the Julia character] came from Debra Messing’s closet. She has the most incredible wardrobe of shoes. [The styles are] beautifully organized and it’s a treat to look through her closet. Anjelica Huston’s character [Eileen] certainly has the most expensive style, but we didn’t want to get costume-y, except in the musical numbers.”

Was heel height a consideration when picking footwear for the dancing scenes?
“I didn’t want the shoes to be dangerous, but Hilty [playing Ivy] is so fantastic and she loves wearing heels. She won’t go without them. McPhee [Karen] wore biker boots and high-tops at some points and little ballet flats with jeans in an audition scene. [But] she’s wearing some strappy gold shoes at the very beginning where she’s having the fantasy about ‘Somewhere Over the Rainbow.’”

Why did you decide to choose costume pieces from the personal closets of the actors?
“For a pilot, the time is so limited. When you’re doing the series, you build a closet for each character. With a pilot, you really start from scratch. We do rely on certain things from the actors’ own closets. What could be better? Certainly pre-worn clothing has more vitality than new clothing.”

Full-on Milan
What would happen if Jimi Hendrix and Kate Moss got together? That’s the question the Jimmy Choo brand was asking in Milan last week, as creative directors Sandra Choi and Simon Holloway described their inspiration for fall ’12: rock ’n’ roll meets romance. “When Kate got married, she looked different, especially beautiful,” Choi said. “That’s the look — feminine with a backdrop of rock ’n’ roll.” Among the featured elements are guitar straps, fox fur fringe, a custom glitter python skin and couture details such as semi-precious stones and hand-cut lace. Elsewhere, Stuart Weitzman was on top of his game while fêting his new line, SW1. “SW1 [in London] is the postcode where I’ve always sold the most shoes,” Weitzman confessed. But despite headquartering his new endeavor in Milan, the designer is still in a New York state of mind, as he prepares to give ping-pong maven Susan Sarandon a run for her money. Weitzman will move his New York showroom to a bigger space, one that includes a table tennis room. “Watch out, Spin Club,” Weitzman said of Sarandon’s New York bar. On the ground floor of the same building, at 15 Via Spiga, Nicholas Kirkwood was in town to toast Pollini’s new boutique there. The creative director was on hand to show off the new store design. “The large light fixtures and mirrored elements are meant to make the space warm and more like home,” he said. Meanwhile, fresh off the Academy Awards, Sergio Rossi Creative Director Francesco Russo debuted a short film of his own: “Skin to Skin,” depicting model Diana Dondoe arming herself in bondage-inspired leather, crocodile and metal accessories from the fall collection. “I am a shoe person, but I start to move up the body, extending my emotions to all the accessories. They are a second skin,” Russo explained. Finally, at Bruno Magli, it was all about fresh perspective. Creative Director Max Kibardin showed off his translation of “Bruno Magli saddlery,” including mustard boots and crimson loafers, while highlighting the redesigned logo, which appears as a seal of quality on the soles. “The idea is to treat luxury like it’s nothing,” Kibardin said, “with classic styles in brave colors that are shocking and chic.”

Shining Shoes
While Oscar statues were highly coveted at the Academy Awards last week, footwear was also a standout performer. Fan favorite Melissa McCarthy (a Best Supporting Actress nominee for “Bridesmaids”) donned a look by BFF Brian Atwood, who flew from Milan to hand-deliver a pair of specially made, Swarovski crystal peep-toes inscribed with a personalized message. “I have known Missy since we were teenagers,” said Atwood. “When I moved to New York, I made her move in with me [from Colorado]. I knew she was a star and needed to be where things were happening. I started booking her for various stand-up venues and the rest is history.” The designer added that he will reunite with McCarthy next month in Los Angeles. Also at the awards, Best Actress winner Meryl Streep had a shoe moment of her own as she walked the red carpet in Salvatore Ferragamo peep-toe pumps because the designer was a favorite of politician Margaret Thatcher (who Streep played in “The Iron Lady”). And before the show, Stuart Weitzman shone in several pre-show specials, where he chatted on camera about the history of his million-dollar shoe and the updated Millionairess style.

Curtain Call
It’s showtime for Christian Louboutin. The designer kicks off his cabaret shoe “Feu” at the Crazy Horse theater in Paris today, after serving as a guest creator and, as expected, supplying the dancers with shoes. And the footwear definitely makes a statement, including some looks with oversized spiked heels and a series of half-shoes consisting of just a heel and straps connecting at the ankle and foot. “Designing shoes for women to walk in the street is one thing, but designing shoes for dancers can bring out different aspects,” Louboutin told Spy. “You have a lot of restrictions — like anything with even a tiny heel, you just can’t [do it] because it breaks.”