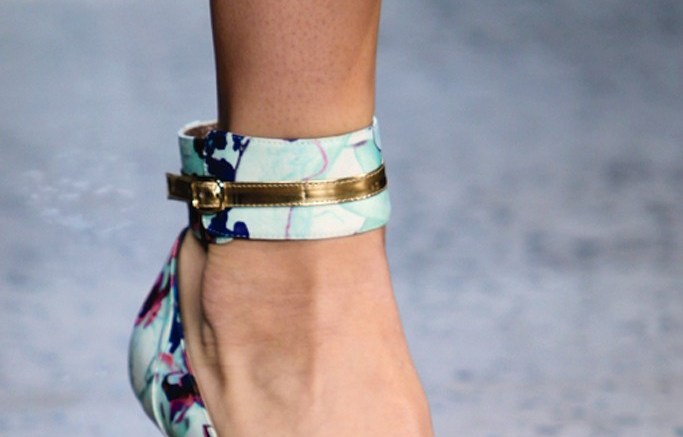 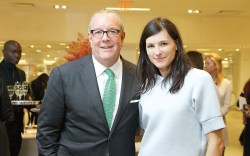 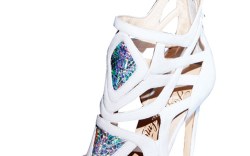 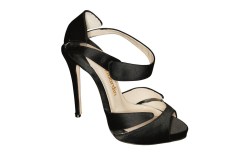 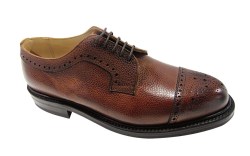 Fashion Forward
It was a Saks Fifth Avenue footwear frenzy. The retailer, which unveiled its expanded shoe floor last month, hosted a slew of big-name designers during New York Fashion Week, including Tabitha Simmons, Alexandre Birman and Pierre Hardy. Simmons squeezed in her Saks appearance last Tuesday in between styling two major runway shows — Marchesa and Tory Burch — and partnering with Peter Som, Creatures of the Wind and Honor for footwear collaborations. “I have to be really organized and stick to deadlines,” said Simmons, who is ready for some family time. “My children are ready to disown me.” Simmons’ favorite Fashion Week moment? Spotting her brand’s Bailey style on Kate Bosworth. “That was quite exciting for me,” she said. A few days earlier, Brazilian designer Birman also set up shop at Saks, mingling with a well-heeled crowd of fans that included actress Ashley Greene, Julia Restoin-Roitfeld and Bar Refaeli. Greene gushed about Birman’s fall collection, particularly the suede and snake styles (of which she picked up at least four boxes). While Birman was busy playing salesman, he confessed, “It always makes me happy to see women who love my shoes.” Hardy also was on hand to promote his women’s offerings for fall ’12, but said he also had plans to do a little shopping of his own. “I like to go shopping when I am in New York because, especially for men, it’s very different from Paris,” said the designer, adding that the city’s art scene is up his alley as well. “The galleries in Chelsea are unbelievable. In two hours you can see three, four, five shows of major artists,” he said. “It’s a big thing for me. I love contemporary art.”

Design Drawing
Shoe designers took New York Fashion Week by storm. Straight from Milan, Max Kibardin attended the “GoGo for Obama” fundraiser at an East Village gay bar. “It was the craziest party I’ve ever been to,” Kibardin said at his spring preview. In from California, George Esquivel greeted editors at the Ace Hotel, showing off his painted and suntanned brogues. “It took us awhile to get the suntan technique right because the leather would burn,” he said, adding that the final process involved fiberboard patterns and glass. Meanwhile, Newbark’s Maryam and Marjan Malakpour were also in town, debuting their spring line and a collaboration with fine jewelry label Hoorsenbuhs. “We just said, ‘Let’s do something with diamonds and shoes,'” Marjan said of the project. Emerging designer Isa Tapia showed her collection uptown and reminisced about taking the plunge with her own brand. “I could either buy an apartment or start a shoe line,” she said. “I think I made the right decision.” Alejandro Ingelmo was also having a moment of reflection, about his first trip to Cuba, where his family is from. “It was an amazing trip,” Ingelmo said. “It blew me away and made me feel stronger about what I’m doing and where I’m going.”

Christian’s Costume
Christian Siriano may be dressing “Girls” star Allison Williams these days, but he’s not all business all the time. With fall in the air, the designer has been busy working on his Halloween costume. “My boyfriend and I always go as a Disney couple,” he said. While in the past they have dressed as Beauty and The Beast and Ariel and Prince Eric, this time around, Siriano will be going as Pocahontas and his boyfriend as Capt. John Smith. “My whole office has been working on the [costumes],” he said. But before the holiday hits, it’s off to Europe first. “I’m going for Payless for some inspiration,” said Siriano, who hopes one day to fit a visit to Russia into his itinerary. But faraway destinations are not the only things providing inspiration. According to the designer, he admires Drew Barrymore’s sense of style. “I like that she can look so beautiful at the Emmys and then wear a maxi dress the next day.”

Cruise Control
Joseph Cheaney & Sons is re-releasing its classic Tenterden style (below), thanks to an upcoming Tom Cruise movie. The superstar will play Jack Reacher in the December film named for the character and based on a famous series of novels by British author Lee Child. “There’s a whole paragraph about the shoe [in the book ‘The Hard Way’],” said Jonathan Church, joint managing director of the brand. “[Reacher’s] clothing is the cheapest you can buy except for his shoes. I guess that says something about Lee Child.” The idea to reissue the $380 made-in-England Tenterden cap-toe brogue came after Church saw a significant increase in Google searches for it, after the movie’s release was revealed.

Model Pose
Elettra Wiedemann is a flats girl. Speaking to Spy recently at the Roger Vivier boutique on Madison Avenue, where the brand was launching its limited-edition Gommette ballet flats, the model said she spends significant time in her three pairs of Repetto ballet flats. “I wear them until they fall apart,” she quipped, adding that she also includes sneakers to the mix. Her pink-and-black Adidas running shoes are a must these days because she’s training for a half-Ironman race in California next year. “I got sick of working out with no real goal other than to look good,” said Wiedemann. “I thought if I have to be at the gym for two hours, six days a week, I might as well measure my fitness and see how fast I am. Once I started, I was totally addicted.”

Road to Boston
Tarek Hassan knows the ins and outs of Boston better than most people. Now he’s about to become even more familiar with all of Beantown’s back streets. The co-owner of The Tannery plans to run the Boston Marathon on April 15 with friend and respectable distance runner Mark Parker, Nike Inc.’s chief executive. According to Hassan, who began training last month, the two made a handshake agreement to run the 26.2-mile race, which ends in Copley Square near where one of the Tannery stores is located. Finishers’ party, anyone?

Spotted
Tony Hsieh in a silent cameo role in the new financial thriller “Arbitrage,” starring Richard Gere. The Zappos.com CEO was on hand in New York last week for the premiere of the film, written and directed by his friend Nicholas Jarecki. Zappos also gets a shout out in the flick.