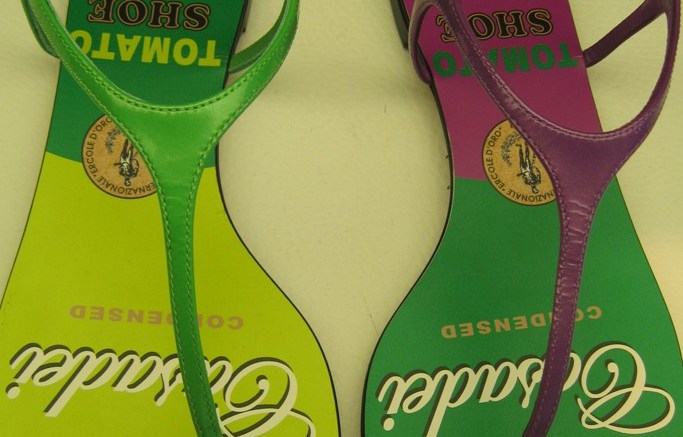 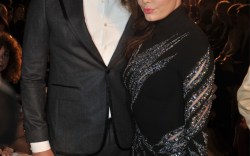 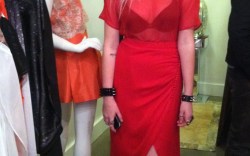 Around Town
Spy made the rounds in Milan’s Montenapoleone area this week to catch up with some of footwear’s finest designers. Pop Art was the talk of the town at Casadei, where Cesare Casadei channeled Andy Warhol with sandals inspired by the artist’s “Campbell’s Soup Cans.” “Each season I look to the art world to get inspired. It’s about finding a way to reinterpret the thought in a new way to [infuse] the shoe with art,” the designer explained. Casadei’s runway shoes for Prabal Gurung were also on display, and the designer confirmed he will work with Gurung again next season.

At SW1, creative director Alvaro Gonzalez proudly showed off one of his newest creations: the shank-less shoe. Gonzalez said advanced engineering between the heel and toes made the style walkable. “It was a shoe I have always had in my head,” Gonzalez confessed. “Then, when I was with Stuart [Weitzman] in the factory, he said, ‘Let’s do it,’ and we made it straightaway.”

At Bally, co-creative director Michael Herz explored the brand’s roots with a spring collection based on ribbon concepts. “Did you know Bally was originally a ribbon company?” the designer asked. Swirling and interlocking leather cutouts were as close as it came to the real thing, but while “Ruby Tuesday” played on repeat, Herz demonstrated a giant sparkling installation created especially for the preview. “It’s wonderland for accessories,” he said.

Jimmy Choo’s Simon Holloway channeled an urban-gypsy aesthetic and looked to photos of Verushka in the 1970s for inspiration. The season’s all-important knee-high sandal boot was on display in several iterations, prompting the co-creative director to confide, “You finish the collection so early, you always cross your fingers that something similar will go down the runway,” said Holloway. “This season, we’re feeling quite validated.”

Alberto Moretti’s inspiration came from closer to home for spring, with a collection influenced by the Venetian palazzo where the designer grew up, formerly home to the Grand Duke de’Medici and his lover, Bianca Maria Capello. “It’s a combination of my vision today and [Capello’s] decorative look then,” Moretti said. And speaking of home bases, the designer hopes to open his first U.S. store in New York in the near future.

Major Magli
Max Kibardin knows how to party. After hosting a dinner during New York Fashion Week for his own collection, the designer partnered with Decades’ Cameron Silver and actress Rose McGowan to throw a dinner for Bruno Magli to celebrate the label’s spring ’13 collection and toast Pat Malone, the newly appointed U.S. CEO. Fellow designer and friend Diego Dolcini was in attendance, although he was fairly spent after months of hard work on his many consultancies. “I was up all night working with Peter [Dundas] on the Pucci runway shoes. But they were incredible,” he said of the carved dragon wedges. Post-dinner, Kibardin handed out long-stem roses in honor of McGowan, who joked that it was reminiscent of the rose vendors pushing flowers on dates. “It’s one of those things where you can’t win. You think your date is a jerk if he doesn’t buy you one, but he’s cheesy if he does,” she quipped.

Puppy Love
Dana Davis’ eponymous footwear label has a new, unofficial mascot: the designer’s short-legged Jack Russell terrier, Hunter. “He represents the heart and determination of our brand,” Davis said. “He is feisty and doesn’t give up easily.” Davis added that the 4-month-old pup, whose latest obsession is eating ice cubes, is one in a long line of pampered pooches. “I’ve had three Jack Russell terriers and a Bernese Mountain dog,” she said. “I come from an extreme dog-loving family [and] I inherited my soft spot for dogs from my dad, [tycoon Marvin Davis]. Our house was always filled with happy four-legged creatures.”

Chit Chat
The WanderLust girls are wondering about shoes. While Emily Bache and Abigail Breslin of style blog Lovelywanderlust.com are launching a handbag collection, the duo also has their sights set on shoes. “We want footwear to be involved [in our collaborations] because we are very specific about the shoes we wear,” Bache told Spy. She admitted she can’t get enough of heels by Sam Edelman, Jeffrey Campbell and Sixty Seven. Both bloggers own only one pair of flats: combat boots. “Otherwise, it’s 5 inches or higher,” said Bache.