FN Spy: On the Les Miserables Set… Sebago Rocks It Out 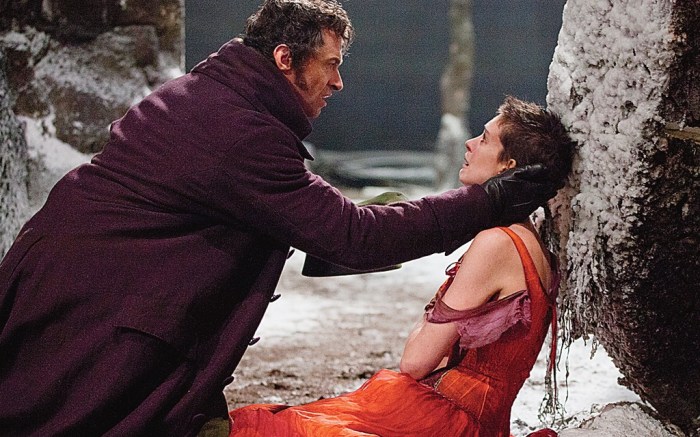 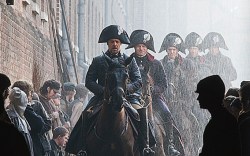 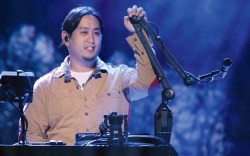 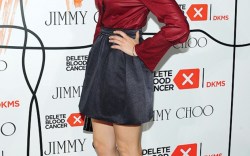 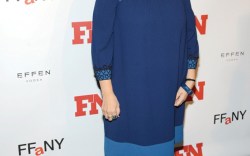 Dreamed a Dream
Imagine a world without heels. The period drama, “Les Misérables,” set in 19th-century France, is just that. “It was a very special period for shoes, it was very unique. The heels disappeared completely for women,” said costume designer Paco Delgado, who used all custom footwear on set. And the specially crafted shoes came from a variety of global factory locations, including Rome, Madrid and London. Here, Delgado tells Spy about his trip back in time.

What was it like working with female lead Anne Hathaway?
“She’s vegan, so we couldn’t use any animal materials on the shoes for her character Fantine. We had to find very specific shoemakers to create lace-up boots and ankle boots. We also did flats that were much more sophisticated.”

What about footwear picks for the men on set?
“Hugh Jackman [playing Jean Valjean] had a combat leather boot look and very rough espadrilles. He also wanted to wear wooden clogs. It was very difficult to walk in them, but he figured out how to do it. And for Russell Crowe [in the role of Javert] it was all boots.”

Any memorable behind-the-scenes footwear moments?
“We were shooting the actors singing in real time, so [we were] very careful with the materials we used to be as noiseless as possible. We used soft materials and insoles to stop the noise.”

Rock On
It’s going to be a rockin’ spring for Sebago. The Rockford, Mich.-based brand has joined creative forces with rock band Linkin Park for a limited-edition boot. According to Sebago GM Gary Malamet, the boot is the result of efforts by band DJ Joe Hahn, an admitted sneakerhead. “He put his inspiration into it,” Malamet said about the handcrafted industrial-inspired style infused with Sebago’s DNA. “We’re genuine and the [band] is genuine.” Scheduled for a 1,000-pair run, the co-branded boot will retail for $250. Delivery is slated for January, timed for the band to wear on its tour, which kicks off in California next month. According to Malamet, a portion of proceeds from the boot’s sale will go to Music for Relief, a project launched by Linkin Park to aid natural disaster victims, including those impacted by Hurricane Sandy.

Life of the Party
Anastasia Ganias is already a fan of Jimmy Choo, but the “True Blood” actress also had another reason to shop the label’s cruise ’13 collection last week. Jimmy Choo teamed up with DKMS Delete Blood Cancer for a star-studded “Celebrate the Gift of Life” cocktail event to raise awareness and benefit the bone marrow donor center. “My father is a blood cancer survivor, so for me it was super-personal, and I think it’s important to spread the word,” said Ganias, a new member of the “True Blood” cast, who portrays fashion boutique owner Tracy Togs. Also quite the fashionista in real life, Ganias donned a pair of tan-and-black Jimmy Choo pumps for the occasion. “I’m a seasonal dresser,” she noted. “As much as I love the open-toe [styles], I stand by that.” Other labels in the actress’ closet include Rag & Bone and Manolo Blahnik. “I am also a Prada junkie,” she confessed. Other familiar faces spotted at the event were Jimmy Choo U.S. President Brian Henke, The Man Repeller’s Leandra Medine, reality star Kelly Bensimon, model Tali Lennox and pop duo Karmin, who performed songs from their debut album “Hello.”

Puppy Love
Anna Sui has Hush Puppies on her mind. Not only will she be collaborating with the comfort brand for a second season in fall ’13 but she also plans to spend the holidays in their shared home state. “I’m going back to Michigan, where Anna Sui and Hush Puppies are from,” the designer quipped. While she was tight-lipped about the look of the next collection, Sui added that her recent fashion inspirations have come from a bygone era: “There’s a whole 1960s thing going on, and I find that really exciting.”

Flower Power
Toms Shoes is getting romantic just in time for Valentine’s Day. The brand partnered with homewares label Shabby Chic for two styles — one wedge and one flat — featuring floral prints fit for the holiday. “[Shabby Chic] holds a special place in the hearts of women and girls everywhere,” said Toms founder Blake Mycoskie. “We love how their iconic floral prints add a sophisticated touch to our classic slip-on and wedge silhouettes.” Retailing for $59 and $74, the styles will sell at Rachel Ashwell Shabby Chic Couture stores and at Toms.com starting in February. In the spirit of Toms’ charitable mission, Shabby Chic will donate a portion of proceeds to Upward Bound House, a nonprofit focused on homeless families.

Shoeing Shay
Two shoe closets are certainly better than one. Actress Shay Mitchell, who is gearing up for the second half of season three of ABC Family’s “Pretty Little Liars,” starting in January, said she’s also looking forward to raiding the stash of her character, Emily Fields. “A lot of the boots are really great. I love them and I am always taking them from Emily’s closet,” said Mitchell. “She’s more casual [than the other characters], but she is dressing up her style a lot more now, and it’s a lot of fun.” So what are Mitchell’s most coveted pairs? “[Emily] has a lot of AllSaints boots that I love, and Steve Madden is amazing.”

Sasha’s Sole
Fans of figure-skating champ Sasha Cohen can finally see what it’s like to be in her shoes. Cohen has teamed up with Klingbeil USA (a line of ice and roller skates owned by The Adoni Group Inc.) to design a skate style for the mass market, and each pair will be embossed with Cohen’s signature. “Amazon.com has put in a huge order,” she told Spy at a recent party held at the brand’s Manhattan factory. “We are launching in January, and we have a photo shoot next week, so it’s really exciting. [The ice skates retail for] around $80 to $90, including blades, so it’s really affordable.” Off the rink, Cohen says she prefers comfy flats, with one exception: “I’m only 5’1,” so when I go out I wear heels. But this is New York — it’s hard to find something you can walk 30 blocks and then dance all night in.”