FN Spy: Gigs for Gaga… Catching Up With Kristen Bell 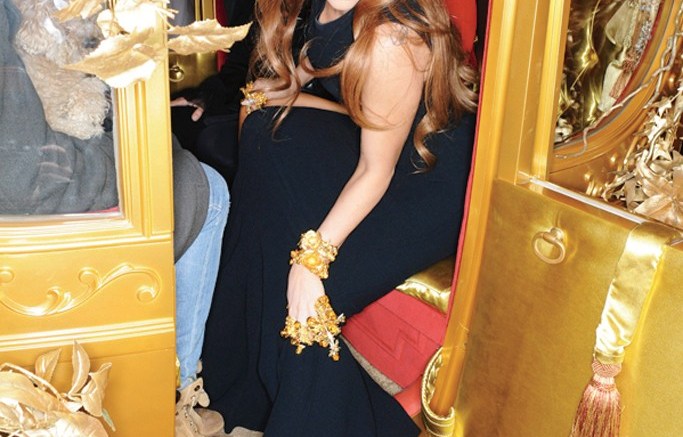 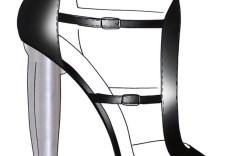 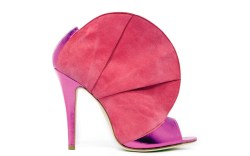 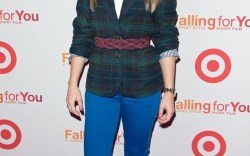 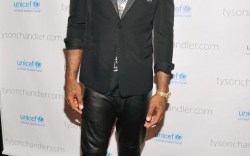 There is nothing subtle about Lady Gaga, as shoe designers Brian Atwood and Atalanta Weller learned after creating custom styles for her “Fame” tour and fragrance launch. “Gaga’s talent and creative spirit is unmatched,” Atwood said of his sky-high platform boots that were inspired by the singer’s debut perfume bottle. While Lady Gaga donned Atwood’s style at a Harrod’s appearance in London, she sported Weller’s custom pair for the “Fame” ad campaign. “I had actually thought they would be for her tour,” Weller admitted of the 40-inch-high boots wrought in black patent leather and enameled latex over a foam base. “But this is even better as you can see them standing still.” Weller, who has worked with Lady Gaga’s styling team in the past, was commissioned to produce the custom art-driven pair. “It was a lot of sharing references and sketches, followed by many late nights in the studio spent in experimentation,” she said.

Meanwhile, Gio Metodiev is teaming up with the ultimate material girl. The designer, who crafts the Gio Diev line, created a pair of custom boots for Madonna’s “MDNA” tour. “I was pinching myself,” Metodiev said of the experience. “For a [young] brand to be working with Madonna is fantastic.” The patent leather pumps feature Diev’s signature blade heels and extra cushioning to ensure Madonna’s mobility on stage. “Her stylist had very specific design requirements,” Metodiev told Spy, though heel height was not an issue. “She wanted them high!”

But for British designer Joanne Stoker, it’s a Nicki Minaj moment. “Her stylist sent over a massive list and requested the shoes be sent straight to Hawaii for a video shoot,” Stoker said. “The only downside is we have the same size — and taste — so I ended up sending her some of my favorite pairs.” But it paid off for Stoker, as Minaj wore multiple pairs of her shoes in the “Starships” video, including the origami-like Flamenco bootie in pink.

On Target
When it comes to choosing footwear, Kristen Bell gets by with a little help from her friends. “I really like Shoemint because they are designed by two of my best girlfriends, Rachel Bilson and Nicole Chavez,” Bell said while in New York last week to fête Target’s first shoppable short film, “Falling for You,” which features the actress. “It’s as if [Rachel and Nicole] are inside my brain designing the shoes. I’m a big fan.” And Bell’s fans have a lot to look forward to: The actress just wrapped indie film “The Lifeguard” and is set to start shooting the second season of Showtime’s “House of Lies.” She also recently competed in a celebrity “Words With Friends” challenge for charity, where Edward Norton was her most formidable opponent. “Listen, Norton pulverized me,” Bell said. “I tip my hat to him, but I can’t guarantee he wasn’t using a dictionary. He told me he didn’t, and he tends to be a pretty honest fellow.”

Off Court
Amar’e Stoudemire is trading in his kicks for a pair of dress shoes. The New York Knick, who’s prepping for his upcoming wedding, said he’s planning to take a brief hiatus from his Nike endorsement contract for the big day. “There won’t be any Nikes or Jordans at my wedding at all,” Stoudemire said. “It’ll be a traditional wedding for sure.” But the baller added that he’s still in search of the right shoes and tuxedo for his size 15 foot and 6’11” frame. “I don’t know yet,” he said. “I might have to find a special designer to custom-make my tux and shoes.”

Bull’s Eye
Call her a straight shooter. Katie Cassidy is moving on from her recurring role on “Gossip Girl” with a spot on the new CW show “Arrow,” which premiered last week. And her character will wear some impressive names this season, including Sergio Rossi. “Laurel is a lawyer, so in most of the courtroom scenes I’m wearing pumps, otherwise I’m in my Converse Chuck [Taylors],” said Cassidy. But that’s not the only shoe tie-in for the actress. Cassidy was recently named a brand ambassador and stylist for Lady Foot Locker. “I try to work out every day, so I’m always in and out of my sneakers,” said the actress.