FN Spy: Ferragamo At the Louvre…On the Road With Pierre 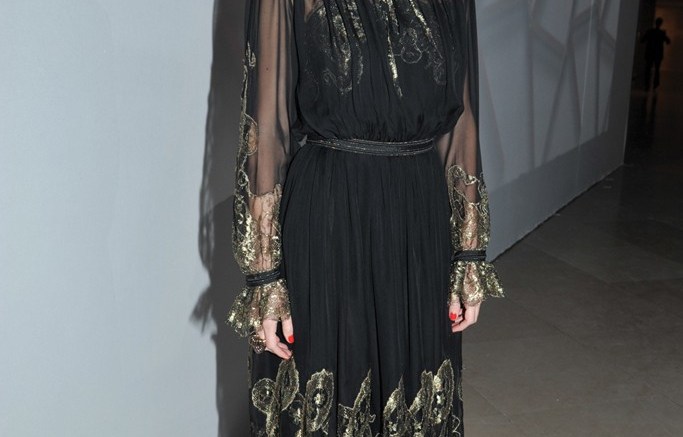 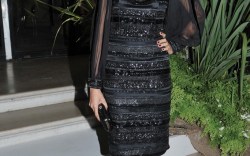 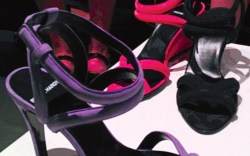 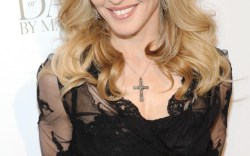 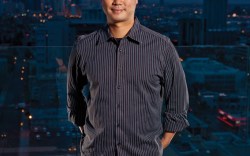 Cat Walk
These shoes were made for walking. It was a footwear fest on and off the catwalk at Salvatore Ferragamo’s resort show at the Louvre museum in Paris last week. Celebrities including Freida Pinto, Leighton Meester and Inès Sastre defied the rain and wind in an array of towering heels. Hilary Swank, sporting a lacy black-and-gold dress and high-heeled open-mesh booties, proved to be something of an authority on the subject. “These shoes fit me perfectly, and you can tell that they put a lot of thought into it,” she said. Her opinion on the heel height was another story. “They say the short heel now is 4 inches. I’m like, when did that become short?” she quipped. Meanwhile, Pinto confessed she was suffering from a recurring foot ailment, although that didn’t alter her shoe picks. Asked how high her heels were, Pinto said, “I have no idea. I’m not even counting!” And Meester was also willing to suffer for beauty. “The higher the better,” she said. “I have a lot of [Ferragamo] pumps. They’re so beautiful.”

Hardy Boy
Pierre Hardy is going all-American this summer. The French designer, who hit New York last week to unveil his resort collection, said he’s road-tripping across the American West. Utah and Texas are among his top destinations, although Hardy intends to round out his U.S. tour with a visit to the Hamptons. “They probably don’t want me here [checking on the New York store] too much,” the designer joked. For resort, Hardy offered up “lighter femininity” with a new cone heel, paper-like painted water snakeskin and plenty of single-sole sandals. “Please, less platforms,” Hardy said of the coming season. Neon sneakers and printed espadrille wedges also appeared in the resort offering, which makes up more than 70 percent of Hardy’s spring sales.

Material Girl
Dancing in heels is second nature for Madonna. “She really is a force to be reckoned with,” said stylist Arianne Phillips. “She certainly likes to wear a high heel.” And now that the musical icon’s tour is under way — the next stop is Barcelona, with shows through the end of the year — Phillips is managing the chosen footwear looks for on stage. “You can never really buy a shoe off the rack and have it withstand five months of touring,” said Phillips, adding that she often alters the footwear. “Sometimes you add glitter so people in the top seats can see [the shoes].” So what brands is Madge sporting throughout her whirlwind tour? “She has worn every brand you can imagine. [She has] relationships with designer labels such as Dolce & Gabbana and Jean Paul Gaultier,” she said, noting that the star often changes shoes anywhere between four and six times during a concert and also has footwear looks by Prada and Miu Miu. And the songstress will, of course, incorporate styles from her Truth or Dare line (a partnership with Iconix Brand Group Inc. and Aldo Group Inc.). “The footwear mimics what’s happening with choreography,” said Phillips.

Office Space
As Zappos.com gets set to relocate to the Las Vegas City Hall building late next year, CEO Tony Hsieh shared one of the staff’s must-haves for the new office space: “The No. 1 request from our employees is doggie daycare,” he said at Venture For America’s summer celebration last week. Other sources of inspiration for the new hub were the corporate headquarters of Apple, Google and Nike, Hsieh added. Meanwhile, the executive is looking to the college crowd to generate fresh ideas for his $350 million Downtown Project, and he’ll take on a number of college graduates through Venture for America’s fellowship program. “We are excited to partner with Venture for America as part of our efforts to bring more entrepreneurial [spirit] to downtown Las Vegas,” Hsieh said.

Up in the Air
It’s no secret how Kim Kardashian got her pair of Nike Air Yeezy IIs — dating the designer is a good way to make sure you’re on the list. But for the other Kanye West fans out there who wanted a pair of the rapper’s second Nike sneaker collab, it meant camp-outs, raffles and even some heartache. At Kith in New York, more than 1,500 avid consumers lined up outside the Manhattan location on June 9 to get a raffle ticket for one free pair or the chance to buy one of the store’s super-limited-edition kicks, at $220. DTLR’s Washington, D.C., location saw 1,500 kids at the store at 7:30 a.m., waiting for an opportunity to win one of 50 pairs. At Miami’s Mr. R Sports, creative director Clyde Edwards told Spy the sneaker hotspot went philanthropic: It sold 364 $5 raffle tickets for the chance to buy one of the store’s 14 pairs, raising $1,800 (which it matched and then some) to make a $4,000 donation to the University of Miami Sylvester Comprehensive Cancer Center. Didn’t win out in any raffles? Nike’s retail arm has said that a few drops will be announced at random on Twitter, and there’s always eBay, where a number of pairs were hovering around the $2,500 mark at press time. That figure might make the buyer of the reported $93,000 pair earlier in the week wish he or she had waited a few days longer.

Staying In
Brooke Burke wants to bring back the staycation. The Skechers spokeswoman said that instead of traveling to a resort location for the summer, her family will avoid airplanes and packing. “We’ll stay home with the kids and enjoy a summer in [Malibu, Calif.],” she said. “I’m all about staycations, creativity and imagination, so I may bring Italy to our home this summer, possibly even Mexico.” Burke will also make time for her work with Skechers’ Bobs charity line, serving as the face of the new campaign. Bobs recently celebrated a major milestone, donating its millionth pair of shoes. “It thrills me to be part of a charity effort that makes a difference in so many children’s lives,” Burke said.