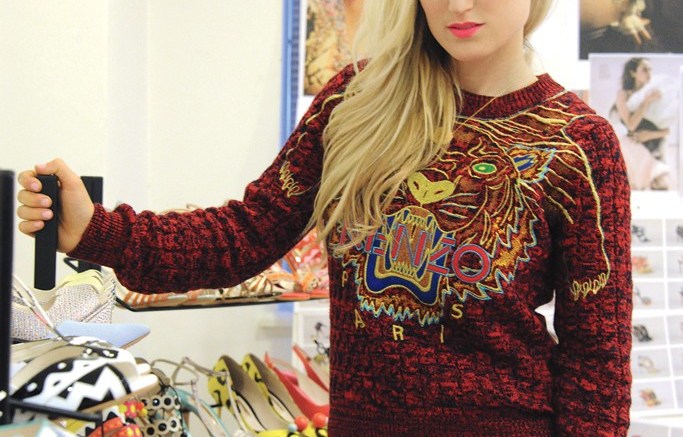 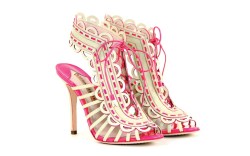 With one of the most buzzed-about debut collections, Sophia Webster is already rising to the top — and her namesake footwear line has only just delivered.

After studying at London’s Cordwainers College, Webster attended the city’s Royal College of Art, where she caught the eye of Nicholas Kirkwood and his business partner, Christopher Suarez, winning two separate competitions that they judged. Webster went on to become Kirkwood’s design assistant, a formative experience for the newcomer.

“I was there to learn as much as I could and absorb everything everyone there had to offer me,” she said. “Nicholas has his own direction, and it’s really inspiring. It even more so made me know I wanted to do my own thing one day.”

Together, Suarez and Kirkwood supported her on the pre-spring ’13 launch of her made-in-Brazil label, which already has retailers talking.

“[The collection] is irresistibly charming, slightly madcap, playful and girly, all the while made with pretty serious craftsmanship,” said Linda Fargo, Bergdorf Goodman’s SVP of fashion office and store presentation. “I’m not sure I can ever recall seeing a debut collection from an up-and-coming designer who I felt, without hesitation, was absolutely perfect for us.”

And that’s just a start. Webster’s whimsical, feminine styles, retailing for $295 to $650, have been picked up by renowned international retailers, including Neiman Marcus, Saks Fifth Avenue, Harvey Nichols and Colette in Paris.

Webster’s keen sense of the consumer market has helped her reach this point so quickly, said Suarez. “She made a point to make shoes that were commercially viable,” he said. “It was fresh to see a young designer who understood that the product needed to be worn. [And still] her designs didn’t look like any other fashion house. She was creatively pure.”

Echoed Kirkwood, “She has a unique way of looking at things. There is a maturity and complexity in her designs, but they are still youthful.”

And while convincing top-tier retailers to take a chance on a new brand is usually one of the biggest challenges facing new designers, Webster was able to assure them that her brand has selling power and longevity.

In fact, Net-a-porter.com made one of the first appointments with Webster, who recalled that at the time she felt excited to finally be showing her line but was also extremely nervous. The meeting, however, couldn’t have gone better, and the e-tailer signed on for online exclusivity.

“It was love at first sight,” said Holli Rogers, fashion director at Net-a-porter. “[The shoes] are the ultimate outfit-maker — fun, fashionable and utterly unique. [They are] just what you want in a shoe. I’m sure the customers will have exactly the same reaction we all did.”

The debut of her own line also brought Webster back to Browns. The London retailer had commissioned Webster’s graduate project from RCA just a few years prior (Kirkwood had produced it in his factories). “Here at Browns, we have always been big fans of Sophia Webster,” said accessories buyer Pam Brady, who added that the designer’s graduate collection spoke volumes about her potential. “Sophia’s [line] is exciting, cool, reasonably priced and well-made — it’s just irresistible.”

For Webster, the overwhelming response from retailers was a dream come true.

“I’m really pleased and so flattered that this level of retailers and buyers are supportive and they got it,” she said of her collection, though the scale of her success is still sinking in. “It’s going really fast, but I’m enjoying every minute.”

But she knows she also has a lot to live up to. With only two collections under her belt, the designer is looking forward to growing her line and maintaining her newfound success.

“If anything,” she said, “all these people picking up the collection makes me feel like I need to make next season even better and prove to them it was a risk worth taking.”