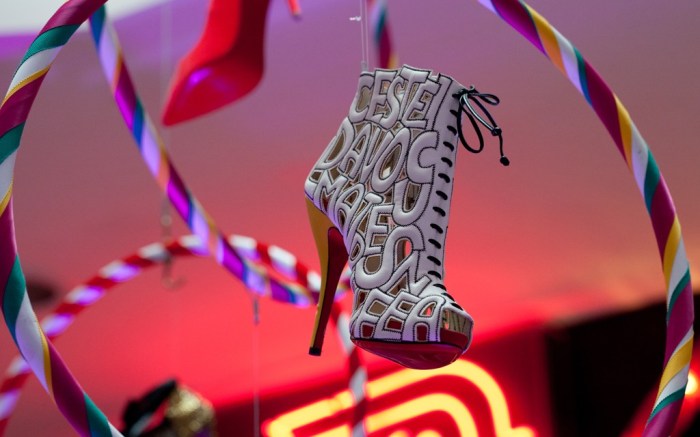 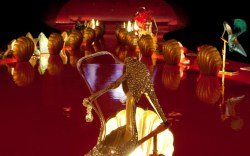 London’s Design Museum unveiled a window into Christian Louboutin’s world on Tuesday, when it debuted an exhibition of the footwear designer’s work, running through July 9.

The retrospective showcases more than 200 of Louboutin’s designs, stretching back to when he launched his brand in the early 1990s, and also gives visitors a glimpse into his creative process. A tableau of the designer’s Paris atelier sits at the center of the exhibition, featuring a table strewn with paints, sketches and shoes, as well as Louboutin’s trapeze hanging in a corner of the room.

“I just wanted to share this little part of the behind the scenes, which is actually a big pleasure in my work,” said Louboutin during a private viewing of the show Monday night, when he was joined by guests including Dita Von Teese and India Hicks. “What I end up doing is these beautiful things, but before that, there’s a lot that is happening.”

Among the shoe designs on display are many of Louboutin’s all-out glamorous pieces, such as platform pumps crafted in black lace and magenta-colored silk heels adorned with a flourish of ruffles at the ankle and toe. From the archive, the Pensee, the Mary-Jane pump that Louboutin created in 1992, gives visitors a look at the first shoe to sport his now-signature red sole. The exhibition also features the designer’s darker side, with a shadowy section spotlighting the fetish-inspired shoes that Louboutin created for a 2007 collaboration with film director David Lynch.

London-based design consultancy Household crafted the theatrical backdrop for the show. The shoes are displayed on a fairground carousel, a glass tower and the red sole of a specially created 17-meter shoe.

Donna Loveday, the exhibition’s curator, noted during a press conference Monday that “theater and performance” are at the heart of the show. “It reveals the true artistry and theatricality of [Louboutin’s] shoe designs,” said Loveday.

The exhibition also explores Louboutin’s various sources of inspiration, including travel, transparency and architecture. Another section is devoted to showgirls, whom Louboutin described as “the first inspiration behind my shoes.”

Putting together the show was an intimate experience, said Louboutin. “I never really separate my private life from my professional life,” he said. “So it’s a bit emotional to see work that’s completely related to your personal life.”