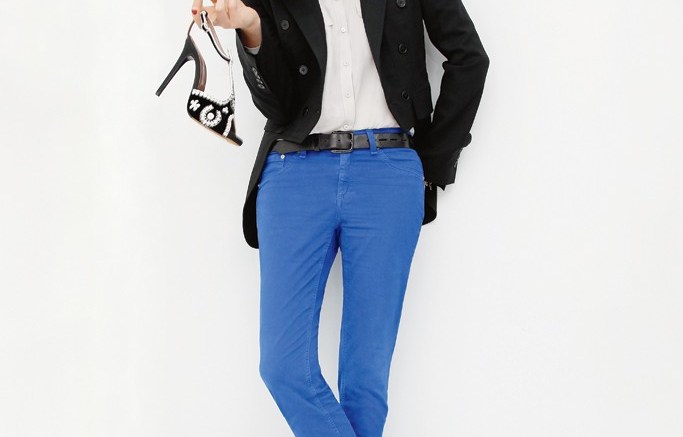 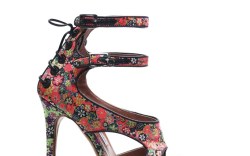 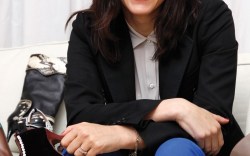 The stylist-turned-designer, who has worked with the likes of Alexander McQueen, Dolce & Gabbana and Marchesa and is a regular contributor at Vogue, is making a serious impression in the footwear business.

“Tabitha has incredible taste, and clearly her experience as a stylist allows her to understand what women want and the proportions that make women look beautiful,” said Daniella Vitale, chief merchant and EVP at Barneys New York.

Simmons, a mother of two boys, admits that it’s not easy juggling her multiple roles ­— she likens her life to walking a tightrope. “You could fall off at any moment,” she said.

But the designer’s recent accolades — including the BFA’s Emerging Talent Accessories Award and a CFDA nomination for the Swarovski Award for Accessory Design — are giving her more ammunition.

Since launching in 2009 exclusively at Bergdorf Goodman, Simmons’ collection, priced from $695 to $2,295, has expanded its global retail reach to 60 locations, including Barneys, Neiman Marcus, Nordstrom, Browns, Harrods, Selfridges and Holt Renfrew, among others. And Saks Fifth Avenue picked up the collection for fall ’12.

Now Simmons is adding runway collaborations to the mix, working with Honor and Creatures of Wind, and upping the digital ante with more interactive content on her website and a boosted social media presence. At the same time, she continues full force with her styling career.

“The way she puts looks together, it always looks believable and cool and very of-the-moment,” said frequent collaborator Mark Holgate, Vogue’s fashion news director. “She appreciates the biggest gestures of fashion. Tabitha’s shoes are like a little event or statement, but they are not meant to be treated with kid gloves.”

And Simmons seems to agree: Her latest digital project was an energetic dance video shot by her husband, fashion photographer Craig McDean, featuring the fall collection reimagined as tap shoes.

The designer’s genuine desire for creating an intimate connection with her consumers has also proven to be a powerful brand-building tool. Simmons, who oversees eight staffers, actively manages her social media presence and continues to sell out of her home in New York to maintain that small brand intimacy.

“I would hate to see Tabitha ever reinvented as a ‘super brand.’ … All the magic would be quickly lost,” said Scott Tepper, head of luxury at London-based Kurt Geiger.

As she continues to grow her business, Simmons said she’s often asked whether she will ultimately choose between design or styling. But for now, at least, there are no plans to venture down just one path. “Sometimes I do things that are a bit extreme, [such as fly from Italy to New York for an afternoon before returning to Paris] but it’s worth it.”

Here, Simmons sounds off on the long road to launching her own line, her first job in footwear and where she wants to take her label in the next few years.

How do you juggle your two careers?
TS: Luckily, with shoes, the lead time is very long. In the lag time after the designs are sent to the factory and before I fly to Italy to see the prototypes, I am either helping with the sales or working in styling. I really love both jobs. Lots of people ask me when I am going to give up one, but at the moment, I don’t want to. There seems to be a nice crossover.

When did you know you wanted to design shoes, specifically?
TS: It’s something I’ve always had a massive interest in. My first job was selling shoes at Oliver’s Shoes [in London]. There were these yellow stilettos that I just loved and I remember they cost 10 pounds [about $16]. I sold them to everyone. My mother never let me wear fashionable shoes, so it’s ironic that I went to work at fashionable shoe stores. It must have planted a seed somewhere along the [way], but I was always interested in fashion.

What has been the biggest challenge you’ve faced since debuting the collection?
TS: Production, getting everything delivered in the stores on time, grappling with factories, begging them for a quicker turnaround. Coming from the creative side, it has been a big learning curve. When I was getting started, it took a year and a half to put in place the production side, to find the best factories, to get a great team lined up before even designing the first shoes. I quietly went about researching it. So it may have seemed like I walked in and said, “I launched a shoe collection,” but actually it took much longer.

What does luxury mean to you?
TS: It means a lot to me. When I set about to do my shoes, I wanted them to be the best quality that I could possibly make. That’s why it took so long to find a factory with that perfect hand. I wanted my shoes to last. Even though they are expensive, luxury should feel timeless. It’s really important for luxury to have longevity as an investment.

Even as retail demand has increased for your product, you’ve kept distribution tight. What is your strategy for developing the brand?
TS: For me, growing my business has been more organic and quite instinctual. My instinct was to start slowly and then grow step by step with the retailers I have partnered with. I would like to grow within the stores we’re with at the moment, to go into a few more doors and open up that way.

You’ve gained a large social-media following via Twitter and your blog. How critical is it for you to personally connect with consumers?
TS: It’s really important. I just started by taking pictures of things that interested me and now it’s becoming a bit more of a habit. It gives you that intimate feel that I’ve always tried to have as part of my [brand]. From inviting buyers into my house for sales or showing out of an apartment in Paris, [the experience is] meant to feel like you’re coming into my world or into my home. I don’t want to lose that.

Your husband is also a major force in the fashion industry. Is he involved in the design side of your life?
TS: He’s extremely supportive of my design business and he’s a great critic. If he thinks something is not great or not “me,” he’s very forward about that. When we work together [as stylist and photographer], it’s work and that’s it. At home, we’re very children-oriented and the only time work really comes up is when we’re talking about scheduling and making sure that someone will always be here.

You have some major celebrity fans, from Gwyneth Paltrow and Michelle Williams to the Duchess of Cambridge. How important is celebrity in building a business?
TS: It’s very powerful and it translates into sell-throughs. But it’s [also] exciting any time someone has gone to a store and chosen your shoes. The departments are so big and there’s so much choice. For someone to actually come out and be wearing a pair of Tabitha Simmons shoes, for me, is really exciting. The same is true with celebrities. From being on the other side through styling, I know there are masses and masses of shoes [laid out for them] to choose from.

You have seen the business from many sides. What advice do you have for young people in the fashion industry?
TS: You have to work hard and pay your dues. You don’t walk into a magazine and do a fashion story straight away. The same is true with my shoes. It took a long time to get to that first collection. I would tell people not to be afraid to start at the bottom and don’t give up. There have been times where things didn’t go well for me, but you just pick yourself up and get on with it.

Is there one defining moment in your career you can point to?
TS: On the styling side, doing the Alexander McQueen “Girl Who Lived in the Tree” show [for fall ’08] was something that I felt very privileged to be a part of. On the design side, I still feel like I’m at the kiddies’ table, still learning and discovering. We’re always looking to improve and asking what went wrong last season and how we can do it better this season. But even when I speak to designers who have been at it 25 or 30 years, they say the same thing. That [feeling] never seems to go away.

What does your nomination for the CFDA award mean to you?
TS: It’s an amazing honor. I was so excited when I heard about the CFDA. But it doesn’t really have time [to sink in]. After winning the emerging talent honor at the [British Fashion Awards], the next morning we were going through production and it was literally like, “OK, you won. Right. Now we have to get these leathers in or the shoes will not deliver on time.” Back to reality. But it was an amazing time and I’m really excited about the CFDAs.

Longer term, where would you like to see the company in the next three to five years?
TS: A store would be amazing. I’m not sure we can put a time on anything like that. But every designer’s dream is to have a store. It’s the best way to communicate your identity.