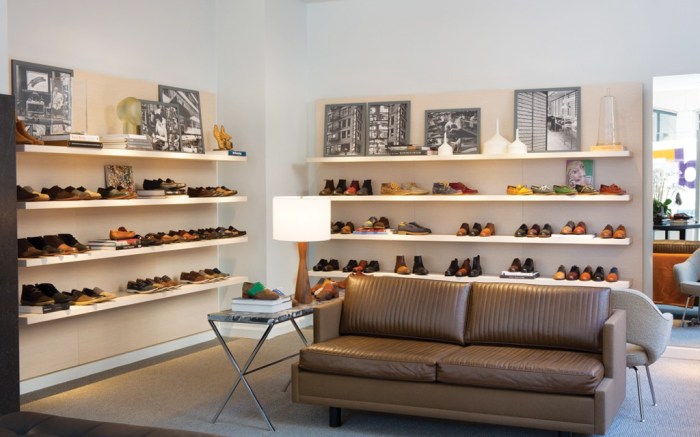 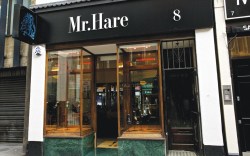 Florsheim Gets New NYC Digs
Florsheim is taking a trip down memory lane with its redesigned Madison Avenue flagship in New York. The 2,000-sq.-ft. store recalls the brand’s long history with an American mid-century aesthetic. The interior is decorated with books, artwork and vintage Florsheim photographs. In a first for the company, the fitting area has been reimagined with more-residential furniture pieces, as opposed to simple chairs. Silver travertine floors and rich brown, navy and gray colors complement the décor. The store will serve as a showcase for the Florsheim, Florsheim Limited, Florsheim by Duckie Brown, Comfortech, Imperial, Royal Imperial and Stacy Adams brands. “We are excited about the new design of our Madison Avenue flagship because it creates a beautiful environment that not only pays tribute to our rich heritage but also showcases how the brand is evolving,” said Chairman and CEO Tom Florsheim Jr. — Wayne Niemi

Mezlan Debuts in Chicago
Mezlan is bringing Spanish style to the Windy City. The brand on Oct. 11 will hold the grand opening of its newest store at 900 N. Michigan Ave. in Chicago. Jeffrey Steinhardt, director of retail and marketing, said the company decided to open there after many notable residents became fans of the brand, including Michael Jordan, Steve Harvey and President Barack Obama. Also, brand owner Antonio Sanchez has a personal fondness for the city. “Chicago is one of the first places Antonio visited when he arrived in the U.S.,” Steinhardt said. “He fell in love with Chicago. It’s an incredibly vibrant city.” The store will stock both the Mezlan and Bacco Bucci labels, as well as leather jackets, wallets, belts, bags and shirts for men. Later this month, the brand will open another boutique at The Fashion Centre at Pentagon City outside Washington, D.C., and additional doors are in the planning stages. “We have several locations on the drawing board,” Steinhardt said. — W.N.

RSG Buys 5 Running Doors
The race is on at The Running Specialty Group. The 19-store running chain, a joint venture between The Finish Line Inc. and Gart Capital Partners, on Oct. 3 announced the acquisition of five Dallas-based Run On! stores. The company plans to ramp up the expansion of Run On! across Texas and neighboring states over the next five years. For his part, RSG managing partner Ken Gart said in a statement that the acquisition fit with the company’s plans. “We want to develop more engagement with a much broader audience of runners,” he said. “With the addition of Run On! and their expertise in the most critical aspects of the business — community engagement, training programs, grassroots marketing and operational best practices — we can leverage the platform [Run On! owner] Bob [Wallace] has put in place to begin to create the specialty model of the future.” — W.N.

Mr. Hare Bows London Unit
High-end men’s brand Mr. Hare has opened its first shop in London’s Mayfair neighborhood. “We’re between Jermyn Street, Bond Street and Dover Street. We couldn’t ask for a better position,” said Marc Hare, owner and founder of the footwear label. “I was getting frustrated because we were only wholesaling and making shoes to please buyers. There was nowhere to buy the whole range. We have enough fans and people seeking the brand to open the shop.” The store occupies two floors, with a total selling space of 193 square feet. — Julia Neel