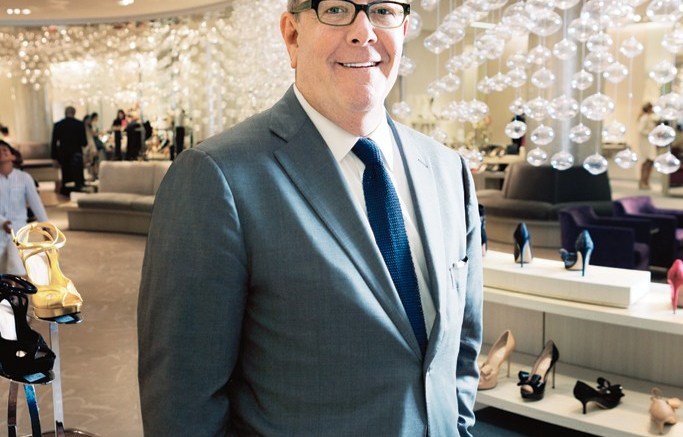 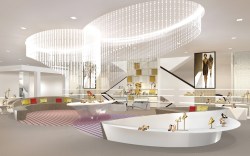 Ron Frasch loves to tell tales that illustrate the power of 10022-SHOE.

He recalled with amusement the day when a Broadway singer was agonizing over which pair of shoes she could afford — Christian Louboutin or Stuart Weitzman. A Minneapolis family nearby noticed her predicament. “The father said, ‘If you sing me a number right now, I’ll buy you the other pair,’ and she did, so he did,” said the president and chief merchandising officer of Saks Fifth Avenue.

Many moments like these have played out since the shoe floor first debuted in 2007, and now Frasch and his team are embarking on a bold initiative to make the department bigger and better, to feed women’s growing obsession for shoes across price points and create “a whole new world of discovery.”

“Shopping should put a smile on your face. We try to create an environment that engages people and takes them away from all the craziness of their day-to-day lives,” said Frasch.

While construction is still a few weeks away from completion, the executive gave Footwear News an exclusive look at the evolutionary changes ahead. The floor will increase in size by 46 percent and will consolidate all women’s shoes on the eighth floor to showcase luxury stalwarts alongside up-and-coming contemporary brands.

“We went through a number of iterations,” Frasch explained. “At one point, we thought about creating a new environment for less-formal shoes that were more weekend-oriented, but we couldn’t make that work as a standalone concept, so we decided to combine it with the existing contemporary floor with a lot of new brands.”

Nearly thwarting the masterplan was a moment last fall when Frasch worried that the combined floor would be too overwhelming. Eventually, though, he decided that “a woman who buys shoes buys an assortment at an array of prices, so it really wasn’t appropriate to ask her to go to two locations.”

The new shoe floor will now measure 32,150 square feet and include a shop-in-shop for Louis Vuitton. To add a visual twist to the space, Saks is planning two new accessory shop-in-shops on either side of the escalators on the floor, which will bow next spring. Frasch was mum on the designers, but said they are both up-and-coming in the category.

Digital elements will abound, too, including iPads that customers can use to browse Saks.com and its social media platforms, as well as a live shoe cam directed at shoppers’ feet, which will air on screens to show customers’ shoe trends.

The footwear concept will be rolled out to four more Saks doors this year — in Troy, Mich.; Chevy Chase, Md.; St. Louis; and Bal Harbour, Fla. — bringing the total to 14.

The dramatic moves come as the department store’s major competitors have radically stepped up their footwear game, but industry players said Frasch’s passion for shoes and innate instincts set him apart from the retailing pack.

“Ron loves shoes and his team shares his enthusiasm,” Manolo Blahnik told FN. “I remember him saying to me once, “Baby, stick with what you do best — sexy, sexy shoes.”

Alexis Mourot, COO of Christian Louboutin, called Frasch “a true leader to his team, with a good eye on product and great vision for the future.” Mourot added that Louboutin’s sell-throughs at Saks have increased through working closely with the exec on store presentation.

Frasch, who kick-started his retail career fresh out of college as Christmas help at Bloomingdale’s, is also known for championing creative talents both young and old. “Ron and his team have always been transparent, honest, straightforward and respectful to our company, [and his] kind and knowledgeable advice at key moments has been invaluable to the growth and maturity of our brand,” said Christopher Suarez, business partner to designer Nicholas Kirkwood. Suarez also called the 10022-SHOE concept an example of Frasch’s intuition. “He has done an incredible job of … engaging a new breed of the Saks customer for the future.”

Here, Frasch shares his thoughts on the evolution of merchandising, what makes shoes special and key advice for young designers.

What are your expectations for the new floor?
RF: This is the second-most-productive floor in this building [after cosmetics, which is a feat] considering it’s the eighth floor of the store. When we first moved it up from the fourth floor, [the results] exceeded our expectations, so now, while we have numbers planned, I think we’re still going to be surprised. Let’s get this one open first, and five years from now we’ll have to figure something else out.

Is that the life cycle of department store reinvention?
RF: It seems that way. It’s important to keep things looking fresh. The floor gets an enormous amount of traffic and there’s a lot of wear and tear, so [at the very least], we have to do things like replace the carpet, paint the walls and reupholster the furniture. We started thinking about this probably a year and a half ago and we felt the time was right.

Was there any added pressure from competitors expanding and renovating recently?
RF: I don’t obsess about competition as much as maybe some of the other folks do. I obsess about Saks, about servicing our customer, creating excitement and newness and fun. Bergdorf Goodman and Barneys have done a fantastic job, and Macy’s will, too. We all raise each other’s game. When all of us are doing something exciting in footwear, it creates a buzz for customers and gets everyone excited.

How important is brick-and-mortar to your business today?
RF: Sometimes I refer to myself as old-school because I think the role of a store like ours is [to be] a place where people can go to get away from all the craziness of their lives. Let us not inundate you with what you already have outside our doors but create something different for you that allows you to be relaxed and pressure-free, and offer you great assortments of product, including our own [brands], which we’re developing very quickly in all categories.

What are Saks’ plans for omnichannel growth?
RF: Right now, we have two separate inventories, so we’re making significant investments in systems to [ensure we have one centralized inventory]. We have a pilot program in shoes where we’re aligning all the buys to create much more overlap in SKU selection. If the stores don’t have a size or a style, store associates can use iPads and WiFi to sit down with the consumer to see if they can purchase it online right there. It’s an evolving implementation, but by this time next year, we should be in pretty good shape.

What continues to drive the strong shoe cycle?
RF: It’s just a result of the great creativity that exists in our industry. Over the past 12 years, the talent has become so impressive. They’re constantly pushing the envelope of creativity, be it with construction or materials. Footwear is one of the last categories out there to really merchandise according to how we want [because other categories have shop-in-shops and brands have dedicated spaces].

Does the European macroeconomic situation pose a serious problem for you?
RF: I returned recently from the men’s market week in Europe, where the attitude is yes, credit’s a problem; yes, business is soft, but they [take it in stride] about being there before and surviving. The situation is difficult, but we still have a lot of people walking into our stores. And we operate very close to the vest. You have to be as strong at bringing in something new as you are with editing [out] those items that don’t perform. We have no choice but to be very diligent on that.

Which emerging designers impress you now?
RF: I’m very passionate about Nicholas Kirkwood. He is a super talent, plus he and his partner, Christopher, are very smart people. I’m very impressed with Tabitha Simmons, who has such an exquisite taste level and approach. I’m also very excited by some of the American talents newer to the category, such as 3.1 Phillip Lim and Rag & Bone. The level of growth of their sophistication and understanding of who their customer is so impressive.

What’s your best advice to young designers starting out today?
RF: Insist on absolute, direct and honest feedback from the buyer across the table and be assertive enough to probe answers that they don’t understand. [Know that] the major department stores are super-sensitive to new talents and we will all bend the rules to work with new talent to give them time to get on their feet and to nurture them.

How do you find new talent?
RF: I have a fantastic team and they do a great job. We’ve been around [enough that we] can smell it. All the great talents have a scent, and it’s very nice. They also have a common thread of incredible passion and creativity.

What excites you most about the shoe business?
RF: I love shoes because it’s the only category of high design where the product actually has to function — it has to fit the foot. In that sense, the canvas that a shoe designer has is very limited, and the design must look flattering on a size 5 foot or a size 10 foot. I go to market every season and can’t believe how these guys constantly evolve shoes.

Who else do you admire in the industry?
RF: [Saks CEO] Steve Sadove and [the late] Stanley Marcus, [former president and chairman of Neiman Marcus]. Steve started here when the company was not in great shape, and he’s really led the executives to rebuild Saks. Stanley, I remember when I was at Bergdorf Goodman, he would come in with a cane and could barely get through the store, but by the time we sat down to lunch he’d tell me 20 things that were wrong with my store. I’ve never known anyone else with his kind of observational skills. Every person I’ve worked for has given me a little bit of a life lesson.