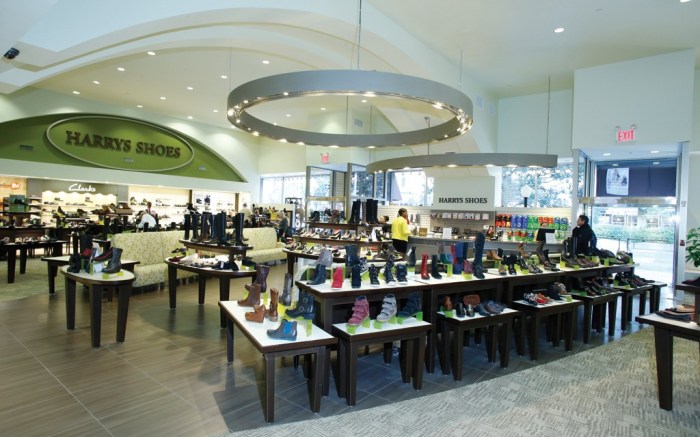 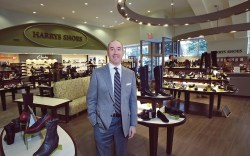 The 4,000-sq.-ft. space grew to about 7,200 square feet when it took over the adjacent storefront and now offers a wider range of contemporary footwear, a modernized interior design and a full-service shopping experience.

“We want to be more of a destination for our consumers and for other consumers we hadn’t really catered to [before],” said owner Robert Goldberg. “We’re a more shoppable store, more comfortable and able to show different kinds of products in other categories.”

The revamped store also stocks an assortment of apparel and accessories, and plans are under way to add handbags to the product mix.

The goal, Goldberg said, is to appeal to the younger demographic that has been moving to the neighborhood.

“[We previously catered to] a consumer who was 40 and older,” he said. “What we’ve done is taken the [full-service] model and broadened it to be more of a lifestyle store for the consumer 25 and older who wants to be in a beautiful, full-service, touch-and-feel type of store. We want a little more fashion-forward and relevant product.”

For his part, Mephisto USA President Rusty Hall said he expects the new store format to click with consumers. “Robert’s knowledge of the market gives him an opportunity to bring in a different customer than has traditionally come to Harry’s,” he said. “There is an opportunity there, and he has the means to market to that consumer.”

Daniel Silver, who designs the Florsheim by Duckie Brown label with partner Steven Cox, agreed: “The store is beautifully redone with just the right feeling of relevance for the Upper West Side.”

While the space remains comfort-centric, Goldberg said it was designed to resonate with local residents. “We look at the store as a reflection of the lifestyle of the Upper West Side, which is a walking community, and we’re definitely specialists in [comfort],” he said. “At the same time, we have evolved into a store that caters to this new consumer who now lives [in the neighborhood] who is more sophisticated, more fashion forward and younger in spirit.”

Goldberg said the larger location and expanded product offering also will help the store compete with big-box retailers (DSW recently moved to the neighborhood) as well as online sellers. “The consumer has been trained to perceive the merchandising selection [in a store] as they see it on the screen based on a vendor website or e-tailer,” he said. “The way one would compete with that is to create a compelling environment in which consumers know they can go in and actually see what they want to see.”

Harry’s Shoes was originally founded in 1931 by Goldberg’s grandfather, Harry Goldberg. The store eventually evolved to become Harry’s Florsheim, specializing in Florsheim-branded shoes for men. Goldberg’s father, Joseph Goldberg, opened the current location in 1975 and expanded the product assortment based on trends he saw in the marketplace.

“My father was one of the pioneers in understanding the walking shoe,” Goldberg said. “He moved the direction of our footwear [assortment] from leather-soled, traditional footwear to this comfort, dress-casual footwear. On many levels, he was a visionary.”

After adding women’s and kids’ shoes and undergoing multiple renovations, the store eventually was rebranded as Harry’s Shoes. Then, in 2006, a dedicated children’s shop was opened down the street from the main location.

Goldberg said he will continue to work on fine-tuning operations and the assortment.

“We’re looking to grow at a healthy pace,” said Goldberg, who declined to reveal sales numbers. “If the business grows 40 to 50 percent from what it was [prior to the renovation], that would be phenomenal.”