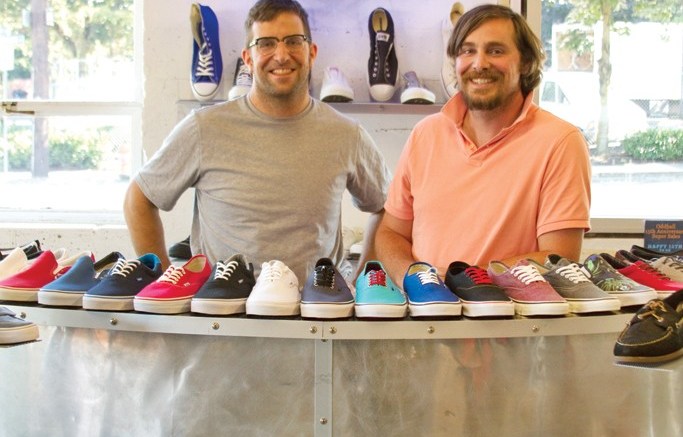 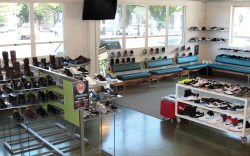 The Portland, Ore., retailer and e-commerce site, which serves shoppers looking for men’s footwear in sizes 12 to 20, is growing its own line of accessories and apparel. Founded in 1997, the store began offering Oddball-branded socks in 2010 alongside sneakers and dress shoes from such manufacturers as Vans and Johnston & Murphy. Early this year, Oddball added custom insoles to the inventory. But continued requests for more oversize gear inspired the two-brother team behind Oddball to develop a clothing line proportioned to fit men who are tall but not necessarily husky.

“When we say ‘tall,’ we mean just that, not also super wide,” said Seth Longaker, co-founder of Oddball Shoes. “People assume that because you’re tall, you’re also big in the waist, but that isn’t always true. We want to offer a tailored fit for tall guys.”

Seth and his brother, fellow co-founder Zac Longaker, who are both 6 feet 6 inches tall and wear size 16 shoes, collected measurements from frequent customers — from 7-foot NBA stars to 320-pound mechanics — to create their own patterns for apparel in sizes L-tall to 4XL-tall. A small selection of jackets has been available in the Portland store since April.

“What we’re finding is that people aren’t making the things taller customers need, so we’re filling a niche on our own,” said Zac. “For fall ’12, we’ve developed an Oddball basics program, which includes T-shirts, sweatshirts, polos and other uppers. Bottoms will come next.”

So far, apparel accounts for just 2 percent of sales, but the hope is to grow the clothing division to match footwear. Oddball sales are up 10 to 15 percent from last year, and the Longakers said they’re on pace to be up 25 percent by year-end. The company did $1.5 million in sales in 2011 and has set a goal of $2 million for this year, according to Seth.

A year ago, Oddball more than doubled its retail space when it moved down the block to a 12,000-sq.-ft. store in trendy northwest Portland. And while the previous location also housed the duo’s selling floor, showroom and a bar featuring local beers, the new space has improved efficiency, said Zac. The shop also features more space for playing vintage video games and chatting with customers. “We like to talk to people and hear everyone’s story,” said Seth.

But the brothers don’t get to meet with most of their customers. A whopping 95 percent of Oddball sales are done online. It’s been this way since the beginning, when the Longakers simultaneously launched the Internet store and the brick-and-mortar space.

From the start, the Longakers focused on footwear. “Growing up, we always had a hard time finding shoes,” said Zac. “We’d go to one Nordstrom location that carried only sports shoes in our sizes, then visit another location that had totally different styles. We realized that a lot of the shoe companies were making large sizes, but not many retailers were carrying them. It dawned on us that if we were having a problem finding shoes, so were a lot of other guys.”

Now Oddball stocks shoes from 28 different vendors. (“We don’t like to buy shoes unless we can get them made up to a size 16,” said Zac.) Prices range from $20 for sandals to $260 for cycling shoes, although Oddball sells mostly sneakers and dress shoes in the $100 range.

The Longakers want Oddball to be a one-stop shop for large-sized shoes, as well as a place where customers feel comfortable. “We have customers who are sensitive about having big feet, so we wanted to create an environment where they could shop worry-free,” said Seth.

This nice-guy approach to business is part of what endears the brothers to PF Flyers and New Balance sales rep Tom Soyster. “[The Longakers] have such an incredible presence — and I don’t just mean their stature,” said Soyster. “They’re really well known and liked in their community. They go above and beyond running a business.”

Others have looked to the retailer to broaden their customer base.

“Oddball has helped bring our product to a new consumer, including all the athletes who have requested our shoes over the years,” said Rollie Wing, head of West Coast sales for Creative Recreation. “Everyone knows that if you need a shoe in a larger size, you should visit the dynamic duo from Portland.”

Still, not every brand sees the value in creating footwear large enough for Oddball’s clientele. “We’re advocates, going out and fighting for the shoes we want to stock. But when the economy went south, a lot of vendors cut large sizes,” said Seth. Other companies have been wary to expand their sizing, claiming the shoe molds are cost-prohibitive. Nonetheless, a new brand could sit on their shelves soon: The Longakers are currently developing their own Oddball shoe line.