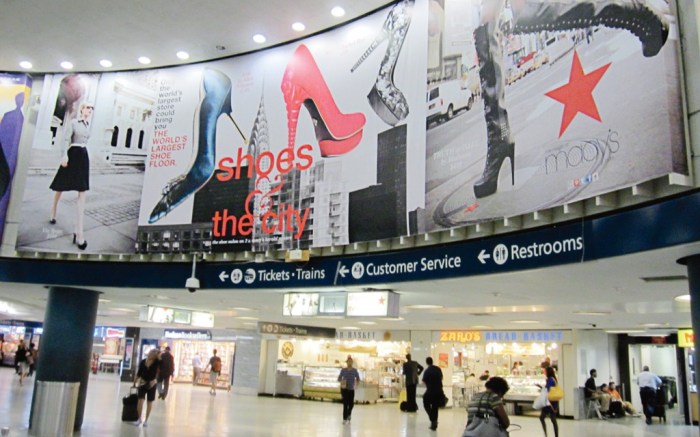 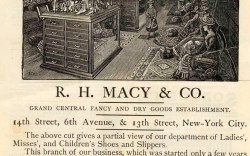 When it comes to promoting its new supersized footwear floor, Macy’s is embracing its status as a Big Apple icon.

The department store, whose flagship in Herald Square is a must for many tourists, has highlighted its reputation with a new marketing push that celebrates the best of New York and the best of shoes.

“We needed a marketing campaign that would fully embody New York and all these iconic landmarks in the city,” said Martine Reardon, chief marketing officer for Macy’s. “And there have been many shows about women and friendships and shoes. Without naming any names, that was really where some of the inspiration came from.”

The campaign, called “Shoes & the City,” features images of key locations throughout Manhattan, from the New York Public Library and Radio City Music Hall to Times Square and Battery Park. Within those shots are footwear styles that represent the top fall trends and brands, presented in a larger-than-life manner. “As this is the world’s largest shoe floor, we wanted to express this with closeups of shoes,” said Reardon.

She noted that the campaign, which was created in-house, started appearing in print newspapers and magazines in early September, as well as in direct mail, social media outreach and outdoor placements. Also included is a glossy consumer publication that will return in November with winter and eveningwear images.

The outdoor efforts, which kicked off the first week of September (just in time for Fashion’s Night Out and New York Fashion Week), were targeted to both locals and out-of-towners. A video also aired on Taxi TV and posters popped up in key hubs in the city. “We have visitors come to our store from around the world, but also from as close as Philadelphia or Connecticut, so [there was] a lot of station domination to let regional visitors know what’s happening,” Reardon said. Macy’s celebrated Fashion’s Night Out with a special event on its shoe floor that featured an appearance by designer Michael Kors. And it launched a sweepstakes that night where customers had the chance to win a complete shoe wardrobe.

Reardon noted more events and marketing initiatives are slated for November, when the full footwear department opens. “This is not just a campaign to open the floor — this is a campaign about shoes. The reason we are so passionate about the product category, and the reason it was one of the first new openings [in the renovation] is because it’s so important to the customer. One thing we constantly hear about is shoes,” she said, “and now we expect to hear even more.”

To get the word out about the new department, the retailer has relied heavily on digital messaging. “A big part of what we’re doing is mobile and social media because those are such a big part of women’s lives,” said Reardon. “We’re all over social media. We have the privilege of being in almost every channel out there.”

On Twitter, the company posts messages about the floor opening, designer appearances and the sweepstakes, and on Facebook, it aims to encourage conversations with fans about their favorite looks. Macy’s also has its own bloggers, who talk about new assortments and brands in the shoe department, as well as trends for the season. And on Pinterest, the marketing team has been pinning boards with photos of fall must-haves such as sequined heels or hot new boots.

Technology also will play a major part in the actual footwear department. Macy’s has created what it’s calling a digital broadcasting system, where it will display promotional images and video in 22 different locations throughout the floor. “It makes the floor even more entertaining, and it’s a new way to talk about the hot styles and trends,” Reardon said, noting that one of the TV screens is 25-by-10 feet in size and will air a new image every 15 seconds.

She added that the system is one of the most exciting elements of the marketing campaign, but also one of the most challenging. “We’ve been in social media for a while; it’s been part of the wheel house. The new piece is this idea of entertaining the consumer as she’s walking through the floor,” she said.

As a result, Reardon’s team had to learn the ins and outs of presenting that content in multiple places, both large and small. “We’re sending one image to one screen and another image to another screen,” she said.

In addition to entertainment, the broadcasting system also functions as a navigation tool to help visitors find their way around the world’s largest shoe floor. “In the boot section you’ll see more images of boots, to help you know where you are,” said Reardon, “but you also might see a picture of an evening shoe, to encourage you to keep going into the next section.”