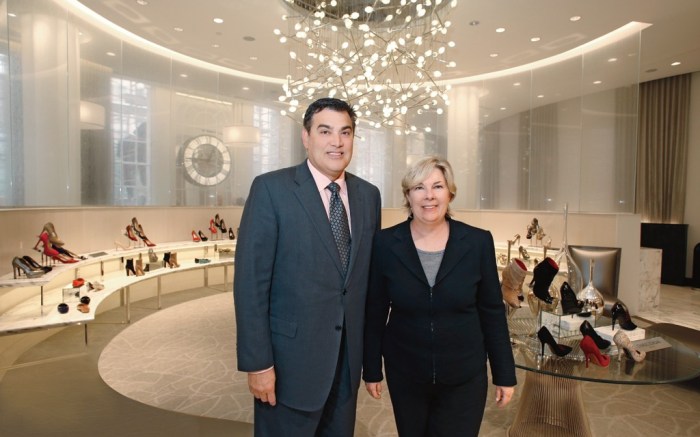 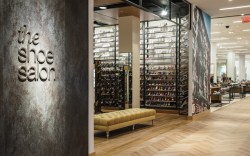 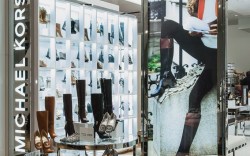 It’s easy to see why Macy’s new shoe salon is the talk of the town.

“If you had been in here yesterday, you would’ve thought it was Black Friday,” gushed Muriel Gonzalez, Macy’s EVP and GMM of cosmetics, fragrances and footwear. “Customers are really discovering shoes they didn’t even know we had previously. Even though the assortment is the same, it all gets highlighted in such a beautiful environment, and customers are able to see the whole breadth of what we have to offer.”

Notably, shoes are displayed on sparkling new fixtures that are closer to eye level than before. A big, bold red leather couch takes center stage on the floor, acting as an anchor for a modular space in which hot trends will be highlighted on a rotating basis, and LCD screens tout popular brands such as Steve Madden and Nine West.

The redesign already is translating into higher sales. “Some of our businesses have seen astronomical increases,” said Gonzalez, speaking the day after Labor Day.

That growth is expected to accelerate when a second set of escalators opens near the Broadway side of the floor in November, leading straight to the designer section and doubling foot traffic to the department, Gonzalez added.

Analysts laud the retailer’s expensive effort to update its image and infrastructure at its landmark location, specifically the decision to complete the shoe floor first.

Michael Binetti, an analyst at UBS Investment Research, said, “The payback on investments in categories such as footwear and accessories within department stores has been very clear. Even Saks said, ‘Let’s do it again,’ so it makes a lot of sense that Macy’s is also going for it. They’re probably taking cues from the strength of the overall category, focusing on the areas that are growing fastest.”

Deborah Weinswig, analyst at Citi Investment Research, said the multimillion-dollar investment “will be a real win for [Macy’s]. The payback here is going to be much bigger than they ever thought.”

Much of the increased productivity in footwear will be attributable to the technological improvements on the floor, explained Weinswig. The handheld POS devices each store associate carries not only checks color and size availability but also accesses customers’ online shopping history.

“A store associate can sit there and engage you and offer you other styles that are similar. They’re not suggesting a sale just based on the pair you’re looking at but have a richer source of data to mine. It’s all about getting higher sales and higher productivity out of your workforce,” Weinswig said. “As Macy’s rolls this out into the other 800 stores, it’s going to be a real opportunity for them.”

Apart from the aesthetic facelift, Macy’s has added other elements, including a café that serves coffee brewed by Starbucks Reserve, chocolate by Vosges Haut Chocolat and Moët & Chandon champagne.

In fact, the café is one of Gonzalez’s favorite features of the new department. She said, “When you’re shopping for shoes, it can get a little exhausting sometimes because there’s so much to choose from. This is an opportunity to sit down, refresh and then go buy some more!”

Macy’s also is upping the ante by increasing the price point: Four new luxury shop-in-shops, namely for Louis Vuitton, Gucci, Burberry and Longchamp, will open by the holiday season on the designer end of the shoe floor, near Broadway.

“It’s very smart of them to offer a more diverse price point offering,” said Weinswig. “Over the past few years, doing things such as changing the Macy’s Visa card to an American Express card tells you who they think their customer is. As they do more analytics, they’ll be catering better to their core customer. At the end of the day, it’s all about efficiency and getting more [selling] done in one place.”

Why was now the right time for this revamp?
Muriel Gonzalez: When we started talking about redoing the whole building at Herald Square, one of the reasons we decided to do shoes first is because of how highly productive [the category] is — not only in terms of sales per square foot but it’s also one of the areas our customers are most passionate about. In addition, shoes used to be in several different parts of the building, partly on the fourth floor and partly on the fifth, so the idea was to put everything together so customers could see the whole assortment at once. The only thing that’s kept separate is the juniors’ category.

How much did you look at your competition while conceptualizing the space?
MG: There’s a shoe moment right now where many stores are looking at their shoe department, so we were very inspired not only by the competition here in New York but also abroad.

Louis Mastrogiacomo: But we’re very different from the other stores because we have all lifestyle [categories on one floor] and we’re really proud of that.

What’s driving this shoe moment?
MG: We are fortunate to work with a really creative market, which is always looking at how they can improve themselves, how they can capture fashion trends [in other categories], and how they can just continue to elevate the experience of the product. It’s certainly a great indulgence for women to buy shoes, and there are so many different occasions — casual, office, going out at night — that you can never have too many pairs of shoes.

LM: And one of the things we’ve been focused on is having the most fashionable styles from each brand.

What sets you apart from your competition?
MG: We service all our customers, from opening to designer price points. We have a huge tourist population in the building, as well as the local shopper and the commuter who works in the neighborhood. It’s really exciting because a mother and daughter can shop here together, find very different price points and very different looks of shoes, but be satisfied here under one roof.

Why is investing in brick-and-mortar stores still important in the digital age?
MG: As you know, a lot of customers today are doing their research online and then coming in knowing exactly what they want to try on. [A store is still important because] there’s nothing that replaces the physical experience of actually putting the shoe on the foot. You want to feel them and try them on. It’s a social experience as well. Shoes are a key part of our e-commerce business, and we work very closely with the e-commerce team to ensure we’re presenting the same exciting assortment to the consumer both in stores and online. The sales associates all have the ability to either order online or from one of the other locations. In the spring, we started fulfilling orders from two dozen of our biggest stores. By the end of this month, it’ll be from more than 200 stores.

How have your vendors participated in reimagining the new shoe floor?
MG: Every brand has elevated their assortment. For example, with Coach, we have products that perhaps they would’ve only had in their retail stores. As another example, because we do a very big business in Calvin Klein shoes, we added the Calvin Klein Collection shoes, in addition to the Calvin Klein Jeans shoes, which are more casual. So we have the whole Calvin Klein assortment, which we couldn’t really do before.

LM: We’ve done the same concept for Michael Kors, with Kors and Michael Michael Kors. Everyone had their input [in designing their little space]. We really pride ourselves on partnerships with our vendors, who work hard with us to elevate their brand so that they look very unique and special in the store.

How important is it to have exclusive product on the floor?
MG: You need to have a very good balance of both brand names that people know and come in for and brands that are exclusive to Macy’s and not carried anywhere else — be they private brands or exclusive styles. [Again, we aim] to cater to all our customers.

LM: Exclusive styles from vendors, meanwhile, are very important. We like to have unique SKUs because it makes us stand out from our competition.