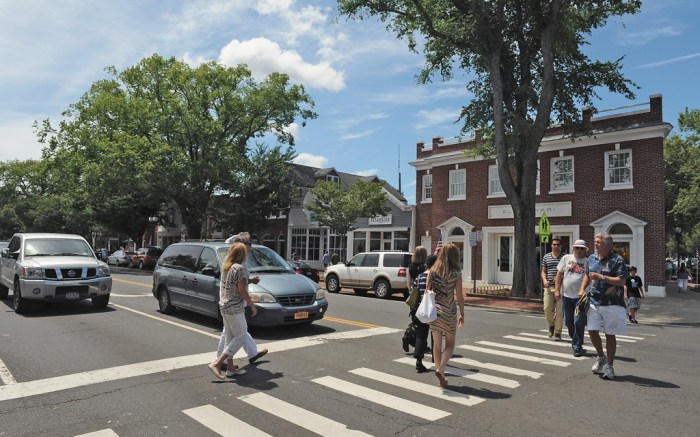 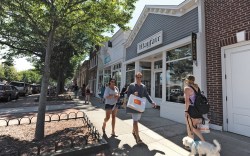 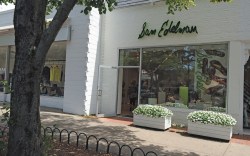 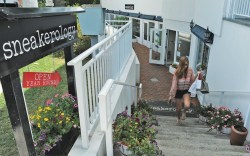 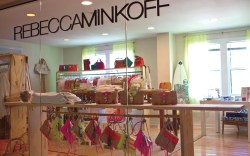 It’s a perfect beach day in Southampton, N.Y., but the vacationers strolling Main Street have a different agenda.

At Intermix, two trendy European tourists carefully survey the shoe display, which is stocked with pumps, sandals and booties from Brian Atwood, Jimmy Choo, Kors Michael Kors and Fendi, among others. Several female consumers from Asia check out discounted spring styles in the back of the store, while the sales associates talk up the good deals.

The increasing number of international shoppers visiting Southampton and the other affluent communities across Eastern Long Island is just one positive sign for area retailers. After a tough few years, the overall mood is noticeably brighter this summer.

The renewed confidence has spurred some retailers, including East Hampton mainstay Blue & Cream, to open additional locations this year.

And more big names are testing the market, including C. Wonder, which opened a whimsical pop-up store in Southampton, and Rebecca Minkoff, whose temporary location in Montauk is garnering a lot of buzz.

Minkoff and others are setting up shop in Montauk as it continues to undergo a dramatic, albeit somewhat controversial, transformation from a low-key surf hamlet to a Hamptons hotspot.

“Everything is pushing into Montauk,” said Faith Hope Consolo, chairman of retail licensing at Prudential Douglas Elliman. “They’ve redeveloped a lot of the hotels and have done a few good restaurants. Fashion always follows food.” (For more, see sidebar on page 12.)

While Montauk might be the place to be this summer, retailers in more-established locales are also seeing increased sales.

Borghi said her second summer has been a strong one, in part because she decided to tweak her product assortment once she got to know the Hamptons clientele.

The storeowner said that while she advertises in local publications, word-of-mouth endorsements have been the most effective marketing tool to drive business. “People like the feeling of a small shoe store. And I have the right mix now, the right amount of high-end styles versus every-day looks,” Borghi said.

Joan Marie’s top sellers include Coclico, Matt Bernson, Castañer and Belle by Sigerson Morrison, all labels that are not heavily distributed in the Hamptons. Borghi also has worked to bring in emerging luxury names, such as Jerome C. Rousseau, and host in-store events including last month’s trunk show with Edmundo Castillo.

Sneakerology, which is marking its second year in East Hampton, is also using an exclusive product assortment to set itself apart from the competition.

“We do a fair amount of business in running product, but we also have a wide variety of retro shoes and Jordan releases,” said manager Joe Karl, who noted that consumers lined up outside the store for the Air Jordan Retro VII debut earlier this month.

Like other retailers, Sneakerology is getting a boost from overseas shoppers this season. “There are more Europeans than ever,” said owner Gary Dworetz. “People know about us now.”

Blue & Cream, which has operated a store in East Hampton for nearly a decade, decided to open a second location on Main Street, just steps away from its original boutique at 60 The Circle.

Owner Jeff Goldstein divided the new space into several distinct areas, with shop-in-shops sprinkled throughout. For example, Havaianas joined forces with the boutique to bow a “make your own” flip-flop shop.

“We already had a strong partnership with Blue & Cream, so it made sense to expand,” said Afonso Sugiyama, president of Havaianas USA.

For Sam Edelman, moving into the Hamptons last summer was doubly beneficial: Not only has the brand gained more exposure but the designer has been racking up some valuable retail experience as he preps to open his first Manhattan location this fall.

“I’m learning so much,” Edelman said. “I’m in there with my design and sales teams, and we have meetings every week to talk about what’s happening in the store.”

Shoe Inn owners Billy and Melissa Lawson have developed plenty of first-hand knowledge about the intricacies of the Hampton retail scene since opening their original location on Main Street in 1997. (The store is now located on adjacent Jobs Lane.)

“Everything has changed so much,” Melissa Lawson said. “It’s really all about buy now, wear now. The era of overconsumption is over.”

That’s one reason some fashion players are still hesitant to bow permanent locations in the market. Not only is the business seasonal, but rents are climbing now that the economy is getting back on track. For example, prime East Hampton Main Street locations can go for as much as $150 per square foot, compared with $110 to $140 per square foot last year.

Many retailers have been able to take advantage of short-term leases for the past several years, but that isn’t sitting well with everyone.

“We have too many pop-up stores and we need to do something about that,” said Desiderio, whose office sits on Main Street. “Southampton has done a much better job. They have allowed more eateries, and when you have restaurants, you have more activity.”

“Montauk is the hottest game in town, no matter how you slice or dice it,” said Judi Desiderio, president and CEO of Town & Country Real Estate.

Cynthia Rowley and Calypso St. Barth have operated stores in Montauk for several years, and this year, Rebecca Minkoff decided to open a temporary location in the Sole East hotel.

“My summer collection closely identifies with a girl who spends her summer in Montauk,” Minkoff said, adding that her M.A.C. (morning after clutch) bags in bright colors and multicolored weave tote have been top sellers at the boutique, which will remain open until September. “Sole East attracts a great crowd, so it was an ideal location for a store.”

Longtime Montauk businessowners have mixed feelings about the influx of big fashion names.

Kai Costanzo, founder and owner of Kai-Kai Shoes, which has locations on Main Street and Gosman’s Dock, said he missed “what Montauk used to be.”

That was a major reason his family decided to put down roots in Block Island, R.I. (a ferry ride away). Earlier this year, they purchased The Inn at Old Harbor and opened a Kai-Kai Shoes location there.

“Growing up, I loved the family atmosphere in Montauk, and that’s what I love about Block Island now. We see this as an entry into the New England market,” he said, adding that Martha’s Vineyard and Nantucket, Mass., could be natural expansion areas for the company in the future.