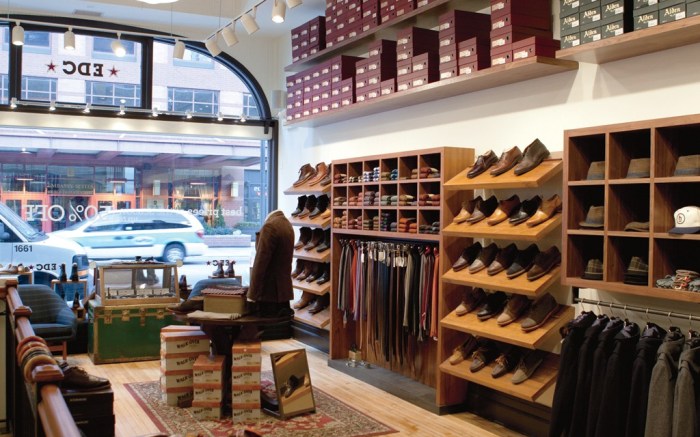 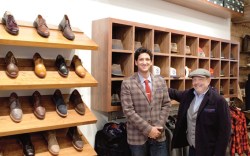 Chicago men’s specialty retailer Haberdash has long had a diverse range of men’s shoes. But it wasn’t until a local magazine awarded its selection of footwear that the owners decided to take a leap of faith and open a unit devoted exclusively to the category.

“It was a eureka moment,” founder and co-owner Adam Beltzman said about the decision to bow Haberdash EDC (the EDC stands for Everyday Carry, a military term for the items one carries in preparation for the day’s challenges).

The 1,100-sq.-ft. store, which debuted last November, is located next to the company’s River North location, opened in 2010. Beltzman bowed his first unit in 2005 in the city’s Old Town section. “Either you grow or you die as retailers,” said co-owner Jerry Kamhi, predicting Haberdash EDC will generate about $825,000 in sales annually and account for 20 percent of the firm’s volume.

Haberdash EDC offers a balance of dress and casual footwear brands that include Alden, Grenson, Red Wing, Sperry Top-Sider, SeaVees and Walk-Over. And this spring, the shop’s owners plan to add fashion looks from Nike and Converse. The collection of rugged styles is presented against a backdrop of reclaimed barn wood, while dressier boots and shoes are set against a clean white wall.

“We have a very specific aesthetic,” said Beltzman, admitting to an affinity for heritage brands, several of which are produced in the U.S. “We’re reinventing the classics.”

In addition to footwear, the store carries an assortment of belts, small leather goods, scarves and hosiery. It also features an apothecary section devoted to grooming items and a vintage barbershop chair, where complimentary shaves will be offered during special events. The eclectic product mix appeals to men between the ages of 25 and 45, said Beltzman. “It’s about a mindset and lifestyle,” he added. “We also get plenty of 60-year-olds.”

Beltzman credits his range of customers to the store’s varied assortment, which rivals department stores in the area. “There’s no real competition,” said Beltzman. “We saw an opportunity in the industry to create a new model for men. Even in a down environment, we were able to be successful both in shoes and apparel.”

In the high-end range, Alden has become a favorite — price points of $400 to $600 notwithstanding. “Guys appreciate it and pay for it,” Beltzman said.

Other key labels include the Florsheim Limited collection, which was new to the shop for fall ’11. “The store is buying more trend-right and vintage-inspired looks,” said Florsheim President Kevin Schiff. “That’s where we’ve been getting their support and what they’re most interested in. Where they’re heading is a hot spot in the marketplace in terms of trends. [Today’s] leading customers are shopping in places such as Haberdash.”

And though the store may be considered classic when it comes to fashion direction, it relies on current marketing tools to generate buzz. “Our guys read blogs and e-mail,” said Beltzman. “They’re not watching TV or reading newspapers for ads.” As a result, he said, Haberdash has focused on social media including Facebook, Twitter and its own blog.

Going forward, the partners are considering further expansion into other cities, but are shying away from e-commerce for now. “We still believe in brick and mortar,” said Kamhi.