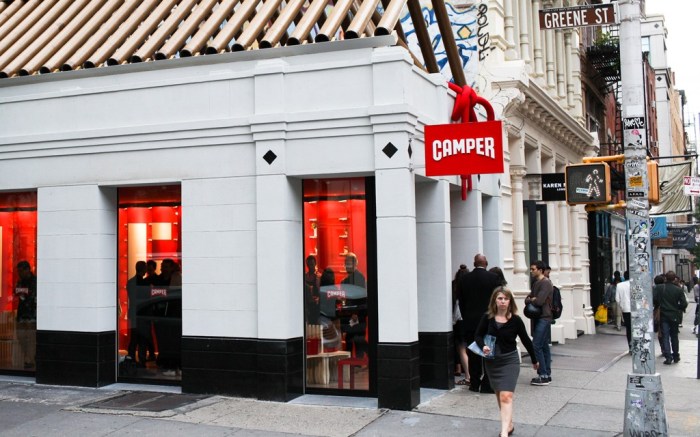 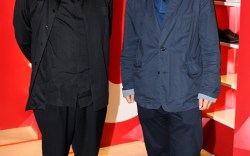 Spanish brand Camper has taken another bite out of the Big Apple. The company on Tuesday unveiled its newest store, a 1,200-sq.-ft. space on Prince Street in the city’s Soho district. It is the 10th store in the U.S. for the fashion-comfort brand.

The store, one of three Camper locations in New York, is located in a single story building acquired by the company. Japanese architect Shigeru Ban designed the store, which features a gabled roof as a temporary art structure.

“We made the building more isolated [from neighboring ones],” said Ban. “We put a pitched roof to make it look like a house.”

Miguel Fluxa, Camper’s GM, said the design will be exclusive to the Soho store. “We like to keep a unique design,” he said. “We can do other designs. It’s good to force yourself to try new things.”

The shoes are showcased in small cubbies arranged in 45-degree angles along an interior wall of the store. The name Camper is spelled out on the walls, which can be seen as the logo — broken and unbroken — from different angles on the corner of Prince and Greene streets.

In place of the original exterior windows and walls are sliding floor-to-ceiling glass doors that can open the entire side of the store in the warmer weather.

The store is part of Camper’s growth plan in the U.S., currently among its top 10 markets, said Fluxa. “It’s [still] quite small for what it can be.” However, he added, the company has doubled the number of pairs sold in the U.S. over the past four years.