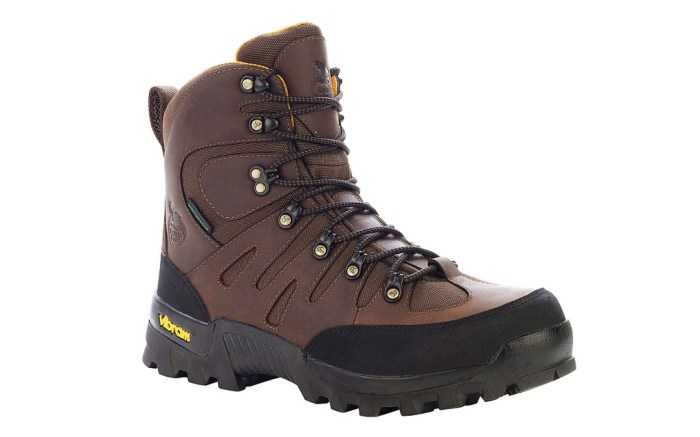 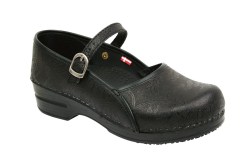 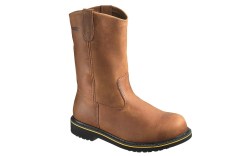 In Tandem
Nelsonville, Ohio-based Rocky Brands Inc. will marry the work and outdoor markets in two new collections for fall. Rocky will transition its popular ErgoTuff workboot into a line that targets hunters and outdoorsmen. Constructed with full-grain leather and nylon uppers in solid and camouflage patterns, the boots feature memory foam footbeds and Thinsulate Ultra insulation. The trio of 9-inch styles retails from $155 to $165. Delivery is slated for June.

Separately, sister brand Georgia Boot will reintroduce its Sport & Trail collection (above) to coincide with the brand’s 75th anniversary. Last available in 2005, the Sport & Trail line includes two sub-collections: the Riverdale, a three-boot package offered in hiker and 8-inch heights; and the Crossridge, with two waterproof hikers, both with full-grain leather uppers and Vibram all-terrain outsoles. The Riverdale styles are waterproof, feature oil- and slip-resistant outsoles and retail for $130 for non-steel toes and $135 for steel toes. In the Crossridge offering, one style contains 200 grams of Thinsulate, while the other features Realtree AP Cordura window inserts in the uppers. That line’s soft-toe boots retail for $140 to $145, and steel toes are $145 to $150. All Sport & Trail styles will deliver in July.

Safety First
Iconic clog maker Sanita is raising the bar on safety this fall with the debut of Smart Step. The Houston-based brand has created a series of duty-friendly looks that exceed industry standards for slip-resistance and feature outsoles made of a combination of TPR and polyurethane. The collection includes five women’s styles and two unisex looks retailing for $125 to $140. Delivery is slated for June/July.

Marking Time
In celebration of the 20th anniversary of Wolverine’s DuraShocks boots, the brand will debut a new style for fall, as well as a national sweepstakes. Since DuraShocks’ introduction, more than 25 million pairs have been sold globally, according to the company. Today, more than 40 styles are available that feature the brand’s patented outsole designed to absorb shock and return the energy of each footstep. New this season is the Foster, available in a 6-inch, 8-inch or Wellington version with optional steel toes. The boots feature a polyurethane outsole and TPU midsole, and combine Goodyear-welt and direct-attach constructions for maximum flexibility and durability. Set to deliver in August, they retail for $116 to $136 and are backed by Wolverine’s 30-day comfort guarantee.

Additionally, the winner of the Wolverine Ultimate Tailgate sweepstakes, set to kick off in September, will receive a trip for two to the 2012 Super Bowl in New Orleans, along with additional prizes to be announced. Consumers can enter at Wolverine.com, with the winner to be announced in January 2013.