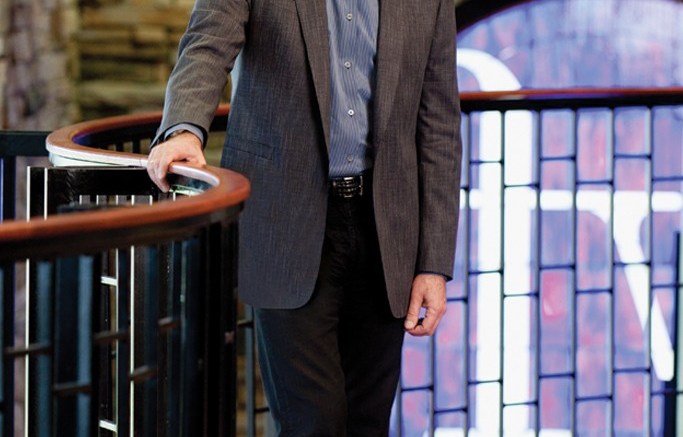 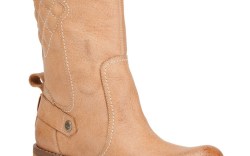 Walking around his bright, spacious office at VF Corp.’s Greensboro, N.C., headquarters, Eric Wiseman is eager to show off some favorite mementos.

In one corner stands a supersized ver- sion of Vans’ iconic checkerboard slip-on. “It was a gift from the team when I was promoted to CEO. They wanted to re- mind me I had big shoes to fill,” he quips.

Wiseman is clearly energized by VF’s newfound status as a footwear powerhouse. The 17-year company veteran has been working to build the shoe category for more than a decade, and it’s the centerpiece of his plan to dominate the outdoor and action-sports arenas.

“This is a continued evolution of a strategy we started building in 2003 and 2004, when we decided to reshape the company,” Wiseman said. “Almost everybody who was a part of those discussions is still here. We’re all still working on the same vision.”

Timberland, the firm’s newest star player, is expected to contribute about $1 billion in revenue in 2012, and VF is aiming for $900 million in sales growth over the next five years. Among Wiseman’s priorities: jumpstarting apparel, fueling retail, amping up the business in China and expanding into new footwear categories.

“They’re doing a great job of integrating Timberland. Things are going in line or better than planned at this point,” said Michael Binetti, an analyst at UBS Investment Research. “VF does lifestyle brands really well, and with Timberland, you will see them start to sell more product than they did before by tapping into active lifestyle, hiking and rugged sports.”

What’s more, VF, which reported sales of $9.5 billion last year, is tightening up costs at Timberland. Earlier thismonth,it announced an unspecified number of layoffs as part of its restructuring process.

The Vans label, which surpassed the $1 billion mark last year, is also front and center, with product, retail and geographic expansion in the works.

International growth is a priority across the VF portfolio, which includes apparel giants Wrangler, Lee and The North Face.

While Wiseman acknowledged the economic turmoil in Europe and slowdown in consumer spending in China, he said many of VF’s more than 30 brands are still under-penetrated in those markets, making it easier to ride out any near-term challenges.

The CEO, now in his fifth year at the helm, is busy plotting more outdoor and action-sports acquisitions. (He also understands when a brand doesn’t fit as evidenced by the John Varvatos divestiture earlier this year.)

New buys are a big part of Wiseman’s mission to increase sales by $5 billion during the next three years. “There are gaps, and we want to fill them,” the CEO said, declining to discussspecifictargets. Here,theexecu- tive talks about the long road to acquiring Timberland, VF’s diverse sourcing strategy and the competitive outdoor market.

What are the biggest ways the company has changed since you took over the CEO role?

EW: We haven’t changed direction. We didn’t need to. We were on a successful path. We are just further down that path than we were five years ago.

How challenging is it to run such a large company with so many diverse brands?

EW: We let the people who run our brands run them. We just try to enable them. I spend a lot of time on strategy and ask a lot of questions. Where are you going? What skills do you need to add? What financial resources are going to be required to get there?

How important is it for each of your brands to have a distinct personality?

EW: We have an earned reputation for keeping the cultures intact of businesses we acquire. They have their own sets of values and priorities. If you go out to Reef in California, you will find an authentic surf company. They live, sleep, eat and breathe that surf culture. That gives them energy around what they do. I’ve had a lot of jobs and I’ve learned that I always perform at a higher level if I’m in a business that really matters to me. You bring people together who want to live that lifestyle and you get the best out of them. [Having brands all over the country] is not the most efficient way to run the business. If we put everyone in one building, we would have much lower costs. But VF is performing at a pretty high level right now.

How is the integration of Timberland progressing?

EW: We have real respect for the three generations of [Swartz] family members that built the company, and we’re not changing the soul of the business. We told the associates that from the beginning. We had an extraordinarily robust planning process — probably 50 to 75 people from both companies working together nonstop for 90 days. We freed up a lot of people and moved them to New Hampshire. One of the reasons Timberland has been so financially successful [to date] is because we had comprehensive plans on the day it closed.

Where is the biggest potential for the brand?

EW: We’re in the early days, but there are many opportunities. Timberland’s apparel business never achieved its potential in the U.S. We’re confident that VF can help enable that. There is a $300 million opportunity in apparel. So that’s a big piece. Then, we talk about geographic expansion. It’s interesting that where VF is most successful and where Timberland is most successful is almost opposite. Japan is one of their best markets, but not for us. They’re just getting started in China and we’re really big in China. We’re moving quickly with lots of infrastructure there. Similarly, in Europe, we’ve looked at it on a country-by-country basis and we’re trying to help each other there. The last piece is the direct-to-consumer business. Timberland doesn’t have a lot of stores in the U.S. And the profitability of our North Face stores is double that of Timberland’s stores here. We have teams from both brands figuring out why.

Timberland is well known for its commitment to sustainability. How big of a focus is that for VF?

EW: We also put a lot of energy around it, but we are much bigger and much more complex, so we are looking at the best practices and thinking about how we can take what they’re doing and spread that further across the company.

Are you worried about increased competition in the outdoor space?

EW: We have a really strong stable of authentic brands. Their DNA is in the outdoor industry. They’re real. I see brands coming in launching outdoor stuff and I’m like, you’re just trying to sell a jacket. That bothers me, only because it’s not real. They’re just in it for the money.

[But competition] is good for the industry. The risk I see is if people quit going outdoors. To get people to do that, you need a healthy environment and that’s why we’re so committed to sustainability. You also need to get people away from their TV screens and computers and iPads and out in the fresh air. It becomes a virtuous cycle. The more people we get involved, the more they care about nature and want to protect it.

How bullish are you about Vans’ future?

EW: Last year, we reported that Vans grew in the double digits. This year, we’re on track to grow in the mid-teens. They have a lot of interesting new product, and the apparel business is getting better. Vans has enormous momentum in Europe. It grew 50 percent [in the first quarter]. We are just launching in India, and we have opportunity in Korea.

How are the sourcing pressures in China affecting your business?

EW: About 20 percent to 25 percent of our prod- ucts come from China. We’ve always had a model that has been targeted to a diverse sourcing platform. [We have production] in Indonesia, Bangladesh, the Dominican Republic and Mexico. We leave a little money on the table sometimes because we don’t have as much in the current low-cost space. But we often see the low-cost space move, so we have less risk in our business and have consistent margins.

What markets present the most potential for the company as a whole?

EW: Asia is really important to us and that’s where we’re getting our fastest growth rate. I spend a fair amount of time there. This year, we’re doing our VF Leadership Institute there for the first time. We will give our team seven days of executive development.

“We spent all of December and January answering calls from investors about [the warm winter season], and our stock price took a little bit of a hit. Yes, we would have done better if the winter had been colder, but it wasn’t the end of the world. I’m a glass-half-full person. Next year, if we have an average winter, it will be good for us.”

His affinity for the Outdoor Retailer show:

His own love of the outdoors:

“I grew up enjoying nature. After a really busy week, North Carolina is a great place to recharge your batteries in two days. At minimum, my wife and I spend one day a weekend outside in the woods walking around.”

“When you’re inside a business, you can become a victim of your own little world. Every one of my initiatives starts with going outside the company to get perspective. We have seven colleges and universities in the area, and I spend time working with the leaders of all those schools. I also spend time with other CEOs and meet with people everywhere I travel. It’s kind of awkward for my team because when I go to a country to meet with a VF business, I always have to call a time out to go meet with another
CEO. I’m a huge believer in diversity.”

“[I recently] flew from Greensboro to New York to Dubai to Banga- lore to Singapore to Seoul to Chicago to Greensboro in seven days. I spent four nights in hotels and three nights on airplanes. That’s the only way to do a trip like that, to keep moving at night.”

“I called [former Timberland President] Jeff Swartz in December 2010 and we started an honest discussion. Prior to that, [former VF CEO] Mackey McDonald had that same discussion with Jeff’s father. Prior to that, Mackey’s predecessor did as well. So it goes back a couple of decades. Timberland was always a large, strategically aligned company that was complementary because of its footwear business. Jeff and I decided we could both get what we wanted.”