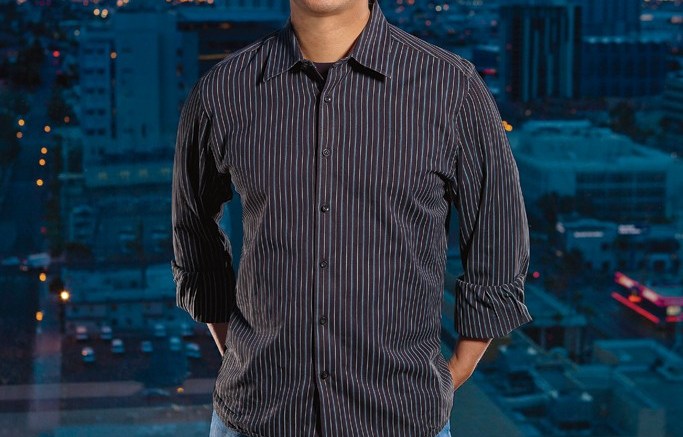 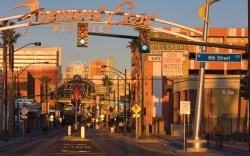 On a recent Monday morning, Tony Hsieh arrives at The Beat Coffeehouse on Fremont Street in downtown Las Vegas. The shop functions not only as a coffee spot but also as a vinyl record store, art gallery and epicenter of the area’s burgeoning creative set, making it feel more like San Francisco than Sin City.

The Zappos.com CEO clearly feels at home here, and it isn’t long before he bumps into a few of his employees — who just happen to be there — as well as the shop owner, a city administrator and a local filmmaker. The encounters, to use one of Hsieh’s favorite words, were “serendipitous” — unplanned, spontaneous and engaging. And this is precisely why Hsieh wants to relocate the company’s new headquarters to this area.

“Serendipitous learning comes from people [coincidentally] running into each other,” the 38-year-old executive explains. “Research has shown that most innovation actually happens not from within your industry but from [knowledge] from another industry being applied to your industry. That’s why serendipity is so important.”

Several years ago, Hsieh, along with other Zappos employees, began frequenting a local bar called the Downtown Cocktail Room, and increasingly he found himself spending more time in downtown’s Fremont East District. Soon after, a vision for what the seedy neighborhood could become began to emerge, and it included a new hub for Zappos.

Still, it’s an unusual place for a large corporate headquarters, considering that the area is largely rundown, with aging buildings and vacant lots.

But Hsieh, a serial entrepreneur, has a knack for seeing possibility — and profitability — in the most unlikely of places. It’s a talent that has served him well since the startup days of LinkExchange, which he founded in 1996 and sold to Microsoft two years later for $265 million, and he’s about to follow his instincts yet again.

Zappos is slated to move into its new headquarters inside the Las Vegas City Hall building late next year, now that city officials have moved to a new building a mile away. Hsieh, who said the company has a 15-year lease on the space, plans to gut and rebuild the interior of the building, while leaving the exterior mostly intact.

The exec also set up digs last year in the Ogden apartment building a couple of blocks away from the future headquarters, though he still maintains his home in the Southern Highlands area of the city.

“[At our current offices in Henderson, Nev.], we’re in three different buildings and we wanted to find a place where we could house everyone under one roof,” the CEO said. “In Vegas, we have about 1,200 employees right now. We’re designing the new [headquarters] to house 2,000, and then have [adjacent] land to expand.”

Hsieh, who has long championed the idea of making corporate culture the cornerstone of his business strategy, said he’s fighting to keep Zappos’ well-documented cultural ethos vibrant as it continues to grow. The new home base for the firm is central to that concept.

“Most companies, as they get bigger, their culture goes downhill,” said Hsieh. “Not only do we want to prevent that from happening but we want [our culture] to get stronger.”

The tech executive — and author of the 2010 business bestseller “Delivering Happiness” — believes the new headquarters will encourage Zappos employees to interact more frequently, both with each other outside of work and with creative types in the community, which could inspire new approaches to problem solving.

“It’s something that’s never really been done before,” Hsieh said. “Suddenly, every place can be an extended conference room for our employees. Our employees will run into each other and interact with the members of the community 24/7. This is what will take our culture to the next level, and culture is the No. 1 priority at the company.”

Indeed, the strength of the e-tailer’s culture was put to the test in January, over the Martin Luther King holiday weekend, when the company’s computer system was hacked. Hsieh said the FBI investigation is still ongoing, preventing him from divulging details about the security breach, but he admitted the event did have an upside.

“The real test of values is what do you do when it’s not convenient,” he said. “[The breach] happened over a holiday weekend. So I sent the email out to employees on Sunday at 4 p.m. saying, next week you need to drop everything and help handle customer emails. Then, on Monday, which was the holiday [and employees weren’t expected to work], at 8 a.m., most of our employees showed up to help, which was pretty inspiring and amazing. For that whole week, it felt like we were back in startup mode. It actually made our culture that much stronger.”

Hsieh said he and the Zappos team hope to have a similar impact on the entire downtown area — not just by spreading Zappos’ culture but by helping area residents define and pursue their own values.

What started as a relocation project has grown into a socioeconomic experiment for Hsieh, one that will result in a new headquarters, as well as a gentrification of downtown Las Vegas. It’s also spun off a side business for Hsieh called the Downtown Project, aimed at transforming the Fremont East neighborhood into a creative hub for Zappos employees, small businesses, creative professionals, tech startup firms and artists.

“Originally, we thought we’d build a campus like Nike’s or Apple’s,” Hsieh said. “As we started thinking about it more, we started feeling that campuses are great for the employees but they are actually very insular and don’t really contribute or interact with the community around them. So we started thinking, rather than just investing in ourselves and in our campus, let’s invest in the community.”

For her part, Las Vegas Mayor Carolyn Goodman said she admires Hsieh’s passion and shares his vision for a rejuvenated downtown district. “He has big ideas and has really bought into the city’s vision of a revitalized urban core,” she said. “I can’t wait to see what he and the influx of young creative people he is bringing downtown come up with as we continue to experience this incredible renaissance.”

At Hsieh’s apartment downtown, the walls are covered with city maps, post-it notes and words such as “Yoga,” “Parking” and “R! Bar” scrawled in marker. This is his vision for the downtown, splayed out on colored bits of paper and inspired by economist Edward Glaeser’s book “Triumph of the City,” copies of which Hsieh hands out to employees, friends, downtown residents and anyone else curious about where he’s headed.

It’s an unconventional method for city planning that shows the collaborative nature of Hsieh’s approach to the project.

“Most city planning is really a top-down, master-plan type of thing,” he said. “The way we built our culture at Zappos was not driven by me telling people what we were going to do. It was driven by our employees. Similarly, here, we don’t want to say we’re going to master plan this thing and hope it works. Instead, our approach is more about finding out what people’s passions are and what [the people who work and live here] want. Our role will be to help other people’s dreams come true.

“We want to make the downtown a place where you have everything you need to work and play, all in walking distance,” Hsieh added. “That will help us attract and retain employees in the long run.”

The Zappos team has so far committed to the plan. Head of merchandising Fred Mossler and several other key executives have moved into the Ogden apartment building with Hsieh, and more are expected to follow.

And Hsieh, himself, is putting his own money where his post-it notes are.

He personally donated $2 million to the new Smith Center for the Performing Arts, which opens this month. The five-acre arts complex will host touring Broadway shows, as well as the Las Vegas Philharmonic.

To help make travel easier for other potential investors, Hsieh bought a 20 percent stake in the charter airline JetSuite for $7 million. He plans to use the airline to fly in entrepreneurs and musicians.

In the Emergency Arts building, which houses The Beat Coffeehouse and offers artists, designers and filmmakers a low-rent place to display and sell their work, Zappos has donated funds to create a tech library and meeting room for inventors big on ideas but light on cash. While the initial donation was made by Zappos, Hsieh will personally cover ongoing operating costs.

So far, Hsieh has successfully relocated to Fremont East five tech startups in which he invests. Among them are Romotive, a firm that designs robots operated by smartphones; and the app company Rumgr, which connects buyers and sellers of used items in their local areas.

The goal is to achieve a population density that will increase innovation and productivity for Zappos as a company and as part of the community.

“Every time you double the size of a city, productivity and innovation increase by 15 percent,” Hsieh said. “But as companies get bigger, productivity per employee generally goes down. So the question is, how do we prevent Zappos from suffering the same fate? Research has shown that to get that 15 percent increase in productivity, you need at least 100 residents per acre, combined with street-level activity.”

The relocation and development projects are both massive in scope, and Hsieh said he is keenly aware of potential pitfalls, which is why the move now dominates his time. “If we get this wrong, it’s a 30-year mistake,” he said.

But getting it right could provide a springboard to further advance the company’s culture.

“The way I look at it is, culture is to company as community is to city,” he said. “It’s the same idea but on a different scale. This is about people caring not just about themselves but about a higher purpose. And if we can do it in Vegas, maybe we can inspire other cities to focus on their communities, as well.”