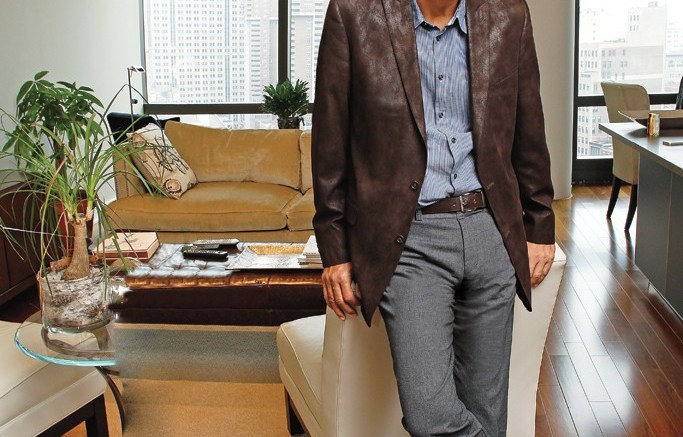 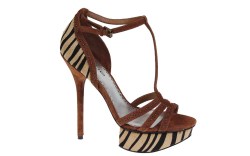 Joe Ouaknine is hungry for more.

Even while acknowledging that his business has slowed recently, the footwear executive is moving forward with several new collections: Vivienne Westwood will launch for spring ’13 and French label Zadig & Voltaire debuts this fall. He also is expanding his venture with Adrienne Maloof of “The Real Housewives of Beverly Hills,” creating a new namesake line following the spring ’12 launch of Adrienne Maloof by Charles Jourdan.

The Westwood deal marks a new direction for the British fashion label, which had been produced in-house. Starting with the spring ’13 season, Huntington Beach, Calif.-based Titan Industries will take over design and sales for the footwear business globally.

“They had an exhibition of old shoes in Shanghai last October, and I fell in love with the whole concept,” Ouaknine said. “I saw that there was a good possibility there, so we started talking about licensing.”

For his part, Cristiano Minchio, CEO of Vivienne Westwood America, said he is banking on Titan to expand the line’s appeal and deliver product to a new range of consumers.

“What we are creating with Joe are shoes that are more accessible to the general public,” he said. “This means we want to sell millions of pairs of shoes, so we think this can be huge.”

In addition, Ouaknine said he will begin producing an Adrienne Maloof branded collection for spring ’13 that will be sold at Belk and Macy’s.

Ouaknine doesn’t disclose sales figures, but he said the company ships 7 million pairs of shoes a year, including both brand and first-cost operations.

According to the CEO, the private-label business, which makes up about 55 percent of his revenue, has ample room to grow, but his branded operations are pushing the limits of the company’s resources. More labels require more staff, larger showrooms, bigger offices and additional booth space at trade shows, Ouaknine said, which can be a considerable burden on the company.

“I have about two brands too many,” Ouaknine said. “I’m maxed out. I keep saying, ‘I’m done,’ but then another opportunity comes up.”

What does Vivienne Westwood add to your company from a strategic standpoint?
JO: It gives me something totally raw and different. It’s couture [and made in Spain]. It doesn’t compete with anything [I have]. It will sell for $400 to $500. Vivienne Westwood is so raw in the U.S. The business is so small here, and there is so much potential. And it gives me an international business, which I’ve also been pursuing.

Why do you think sales are softening?
JO: At this point, I can’t blame the economy. I think our design team got tired for one season. We had a Badgley Mischka production [run] in Spain that came out terrible and we had to throw it away, so that dropped some business. Then, we don’t ship True Religion anymore, so there are some numbers that are missing. We still are working against Betsey Johnson numbers — April was the last month we shipped them. But our future orders are healthy. We’re still cash positive with no loans, no debt.

Any new product categories you’d like to branch out into?
JO: If there is a good sneaker license that becomes available, I might look at it.

You spend a lot of time in China. Describe the sourcing challenges there.
JO: It’s not good. The good factories are charging way too much. The bad factories are bad factories, and you never know if they’re going to last or not. The first thing I will do when I get [to China this month] will be to address production issues. Factories are starting to lie. They promise you a date and then they don’t have it at the last minute. But [footwear companies] realize there is really nowhere else to go [for production]. [Factories] know this, and they’re starting to take advantage. I became an owner of a factory in China last year. I’m partners with them, and they won’t even give me a break. I thought I would get better prices, but no.

What kind of increases are you looking at?
JO: [Costs are] going up because we have no choice. We went up at least 15 percent this year. If sourcing costs rise 10 to 12 percent, you have to raise wholesale prices 15 percent. That’s how it is.

So how are you managing those cost increases?
JO: By being nice and being close to [the factories]. That’s why I take more frequent trips to China. Also, I own an insole factory [purchased three years ago]. I own an outsole factory [purchased this month]. That means we make our own things. Then, we don’t have to depend on other people. You have to save where you can, on the insole and outsole and the heels and the lasts.

Has the recent media attention regarding worker conditions in China made you more concerned about how workers are treated in the factories that make your shoes?
JO: We do business with 40 factories. We have full-time quality control people in those factories, and we get daily reports. We don’t do business with factories that abuse people. We know that for a fact. We monitor it.

Are you still looking for alternative sourcing locations?
JO: No. We looked but we couldn’t come up with anything [that worked well enough for us].

What are your plans for your private-label business?
JO: I will take anyone on a private-label basis because we don’t have to sell the shoes. It’s a good business. It grows 20 percent every year.

What are your plans for international expansion?
JO: We’re expanding [overseas] a lot. We have a nice distributorship in England. And we’re talking to distributors in a lot of different countries. We’re expanding in Asia, Europe, Russia, Ukraine, and, obviously, China. There is no area I’m going to exclude. International makes up maybe 10 percent [of sales] right now. I’d like to see it go to 20 [percent] in the next two years.

How often do you get offers from people who want to buy Titan, and would you ever sell?
JO: I do get [offers], but I don’t even return their calls because I’m not interested. We have five of our six daughters working here. We want to keep it a big family business.

What other brands do you admire?
JO: I like what Sam Edelman is doing. It’s really good. I like the price points and I like the shoes. One thing that surprised me is how well Ivanka Trump is doing. They really found a niche. And Jeffrey Campbell is doing some great, funky stuff. He’s a maniac and a hard worker.