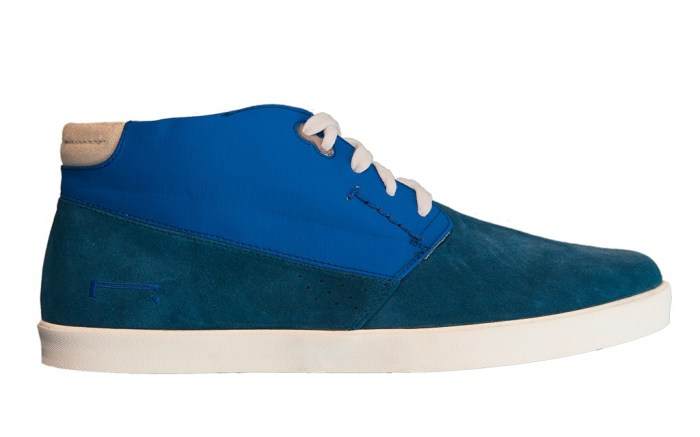 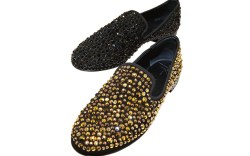 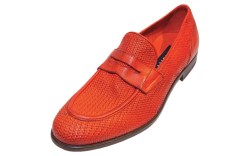 “[Footwear] is performing fantastically and beyond what we had planned. We will certainly take that into account when maximizing our buys for the season ahead,” said Mrporter.com buying director Toby Bateman.

“The footwear and accessories category continues to be one of our top performers,” she said. “There is a growing segment of the market that is very interested in having the right shoes to not only complement their outfits but in some cases help them stand out.”

According to Cundiff, a new generation of men who are “very competitive in their style” is changing the market, driving the request for more colorful, playful and eccentric styles and treatments, which were big at the fair.

Below is a summary of key brands, scoops and trends at the show.

• Fresh, summery tones of blue, mixed with flashes of red, took center stage at Fratelli Rossetti, which revisited its iconic Brera tassel loafer for the spring ’13 season. The “Summer Brera” has a lighter construction compared with the classic winter version. Its upper was garment-dyed to obtain color gradations.

“We also developed more classical and traditional styles, which are fundamental for approaching customers in the emerging markets,” said Fratelli Rossetti CEO Luca Rossetti, adding that the company, which already operates seven boutiques in China, is trying to grow its presence in Asia, targeting new countries, including South Korea, Taiwan and Thailand.

• Beirut is the next hot destination for Cesare Paciotti, who plans before next spring to open a new flagship store in the Lebanese metropolis, right in front of Christian Louboutin’s boutique. Also for spring ’13, Paciotti focused on his signature 308 Madison style, presenting a capsule collection of lace-up takes on the look made in collaboration with Italian vintage retailer A.N.G.E.L.O. “We went to a military vintage market where we bought the NATO canvas we used to craft these limited-edition shoes,” Paciotti said.

• To raise its brand profile, Bruno Magli, on top of its Pitti presentation, also held an event at the Westin Excelsior Hotel on Wednesday to unveil a limited-edition capsule collection conceived with New York-based artist Brian Kenny. The line consisted of four black fabric loafers and a bag featuring exclusive glow-in-the-dark decorations created by Kenny. “We took the inspiration from Pier Paolo Pasolini’s movie ‘Medea,’ featuring Maria Callas,” explained Bruno Magli creative director Max Kibardin, revealing that he is developing further artistic collaborations, including an upcoming project with an undisclosed jewelry designer. Magli, which is gearing up to revamp both its Milan and Venice boutiques with a new concept, also will move its American headquarters to Manhattan and plans to open a new store in London, according to CEO Armin Mueller.

• As an old English shoe label, Grenson traditionally has always been known as a winter player. But with men now specifically buying summer shoes, the brand aims to offer more unique, playful styles. To that end, Grenson launched a customization service dubbed G Lab. The service allows retailers to compose and co-brand their own designs using different materials and colorways, choosing from a range of swatches, leather soles and eyelets.

• For the first time this season, Brunello Cucinelli introduced colorful styles, including boat shoes and flip-flops in bright tones of green, red and indigo blue. In line with its high-end positioning, Cucinelli also showcased two lightweight derbys in precious cordovan, a leather made from horse’s rump, sold with an exclusive cashmere packaging.

• Luxury was the key word at Giuseppe Zanotti. The designer unveiled his first complete men’s collection at Pitti, and sophisticated tasseled slippers were among the must-have items, along with high-tops and sneakers with neon details and studs.

• To satisfy customer requests for comfortable and practical fits, A Testoni focused on deconstructed shoes, including foldable stretch leather loafers featuring a shape memory structure. “For next spring, we lightened constructions and delivered a fresh, summery look using bleached leather and exotic skins,” said CEO Bruno Fantelli, referring to the color palette of ultra-light shades of denim blue, mint and natural tones, used for a wide range of styles, from more formal derby shoes to combat boots and sneakers.