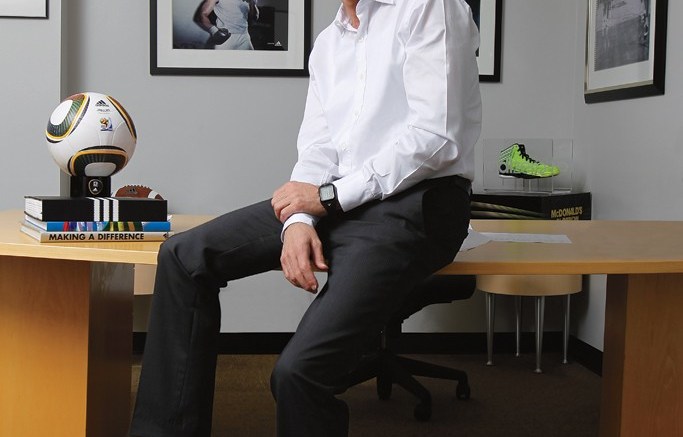 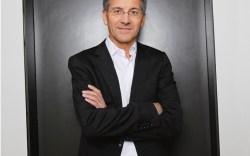 Sitting in a borrowed office in rain-soaked Portland, Ore., on a recent March morning, Adidas CEO Herbert Hainer isn’t warming to the weather.

After making a West Coast trip that included meetings with the Reebok sales team in Phoenix and TaylorMade-Adidas Golf in Carlsbad, Calif., Hainer found himself ill-prepared for the constant showers at Adidas North America’s headquarters in Portland.

“It’s lousy, it’s cold, it’s blech,” he said. “The weather is changing, global warming is hitting, you can’t predict it anymore. The only thing that is constant is that it is raining in Portland from November to April.”

But even as the puddles gather on the soccer pitch just outside the windows, Hainer’s forecast for the Adidas Group is downright sunny.

In 2011, the Herzogenaurach, Germany-based athletic firm logged some numbers to be proud of: a 13 percent sales increase currency-neutral to more than 13.3 billion euros (or $17.6 billion at current exchange rates), the strongest growth rate in five years; net income of 671 million euros ($886 million), an 18 percent rise over the prior year; and double-digit sales increases in North America (15 percent), Russia and Eastern Europe (26 percent) and China (23 percent).

And in the first quarter of 2012, reported early today, Adidas has only increased its momentum. Preliminary reports from the company show a fifth consecutive quarter of double-digit growth, with revenues up 14 percent currency-neutral to 3.8 billion euros ($5 billion at current exchange). The company is expecting to guide full-year sales up almost 10 percent currency-neutral, above the previous projections for mid- to high-single-digit growth.

But the sales results mean more than just financial success. They are key to Hainer’s ambitious “Route 2015” plan, which aims to boost revenues by almost 50 percent to 17 billion euros ($22.4 billion at current exchange) by 2015, led by the overseas markets.

“We have said that three key markets — China, Russia and America — will be 50 percent of our growth in 2015. In 2011, [they made up] a little bit over 50 percent, so we are on the right path, and of course, I will make sure that these three countries are running appropriately to get [the numbers] we are targeting,” Hainer said.

The company also is looking for growth by making an aggressive play for the global running and basketball markets.

“The biggest potential we have is in running, because the running market is so big, and that’s true for America, for Asia [and] globally. Even with our big play in the running category, there is still a lot of potential for us,” Hainer said.

The CEO’s vision for Adidas — to make the company the world’s leading sports performance brand with global strength and a strong appeal to the youth market — is one he’s been honing during his 25 years with the brand, 11 of which he has spent in the driver’s seat.

But as focused as Hainer is on top-line sales and stealing market share from competitors, he’s also a passionate sports fan who said he feels lucky he happened into a career that lets him be immersed in sports and youth culture.

You hit some key performance targets in 2011. What made the year such a standout?
HH: 2011 was definitely the best year in the history of our company in two aspects: One is the pure financials — we’ve never had higher sales and we’ve never had higher profits. The other one is the quality of the business. We are growing with all our brands, and we are growing in all regions around the world, and therefore the business is very well balanced. This is why I can confidently say that it was the best year we’ve had. We have really built a great platform, and 2011 was a great start into our Route 2015 plan, and I don’t have any reason at all not to be optimistic that we will achieve our targets. The Adidas brand has never been hotter than it is today. Of course, there [have been] some bumps in our road, like with Reebok EasyTone and the [Federal Trade Commission] decision, but, hey, life is not a one-way street.

What’s the outlook for 2012?
HH: We have already said that we want to grow our revenues by mid- to high single digits and our profits by 10 percent to 15 percent. We never have missed any of our promises and I do not intend to do it in 2012. We will most probably have revenues of around 14 billion euros [$18.5 billion at current exchange], and we will have another net income increase of 10 percent to 15 percent to what we had in 2011.

Will you expand last year’s “All In” campaign this summer?
HH: In 2011, the brand campaign was our key focus and our main advertising point. We spent more than 100 million euros for the campaign, and we will continue it, but obviously in 2012, we have a few other events as well — the Olympic Games and the European football championship — so we will not put all our money behind the brand campaign. We’ll spread it more in some other events in 2012.

The 2008 Beijing Games were a major building block for your China business, but you’ve said in the past the London Games don’t present a similar commercial opportunity. Why is that?
HH: In China, we used the Olympic Games to really build our business, so the day after the Athens Olympics were gone, we started to work in China. This we haven’t done in London because in London everybody knows Adidas.

In June, the UEFA Euro 2012 soccer championship kicks off in Poland and the Ukraine. Is that a similar brand-building opportunity?
HH: The European championship is a different animal. We will sell tons of jerseys from the teams that are competing. We have six out of the 16 teams — more than anybody else — and we have the favorites with Germany and Spain. We have the official match ball. We outfit all the volunteers, the referees, etc., so this is a bigger commercial opportunity. We have said that 2012 will be the best year in football revenues, and we will definitely want to do more than 1.5 billion euros in football revenues.

Last month, you made a $70 million acquisition to bring Adams Golf into the TaylorMade-Adidas Golf division. Why are you so bullish on golf?
HH: Golf is so successful for us, [and] the [TaylorMade] guys really know what to do. They are passionate, they are experts and they have [over] the last 10 years built a golf business for us from $330 million to $1.4 billion, so we will give them the bullet and let them shoot. [The golf industry] hasn’t been growing since the financial crisis in 2009, but we still are growing because we are taking market share from all the other competitors. I am absolutely convinced that there is still growth potential out there for us in golf, and you will see when we announce our numbers in 2012 a very nice growth path for golf.

How are you feeling about the general economic picture?
HH: As long as the economy is growing, we will definitely have no reason at all not to achieve our targets. Because we have shown in the past and even with difficult circumstances — even last year, when the economy in the U.S. was not the greatest — we still managed to grow here in the U.S. and around the world.

Are you more optimistic about Europe’s financial situation going forward?
HH: Europe is stabilizing now since Greece has calmed down, [but] we also should be realistic. I mean, Greece is less than 2 percent of the GDP in Europe. This is a little bit [a case of] the tail is wagging the dog, but of course, the markets were nervous. America is getting better. At least, the unemployment rate is going down. The most important thing is that we are able to build desirable brands for the consumer, and this is what I think is the key to success.

You started with Adidas in 1987. Did you have your eye on the executive suite back then?
HH: When I joined Adidas, I never had the desire or the dream that I could run the company one day. This was never my target. I have never planned my career. Year after year, I took more responsibility, and when they were searching for the CEO, I was in the right place at that moment. But it was definitely not planned that way.

What’s been your greatest accomplishment at Adidas since you became CEO in 2001?
HH: This is difficult to answer. It [means] a lot to have young people around me who are all passionate for sport. To create a culture like that, maybe this is one of the biggest achievements.

Any low points?
HH: I have my bad days [like] everybody. When we got fined by the FTC [for the EasyTone campaign in 2011], that was really a bad day because I thought it wasn’t justified. It’s a lot of money — [$25 million] — but you have to get over it. I like what I do. There are so many more [good days] than bad days. But I would lie if I said everything is glorious.

After college you spent seven years playing semi-pro soccer in Germany. Has that had any influence on your current role?
HH: Football teaches you team playing. You realize relatively soon that not one individual will make the final victory — we all have to play together. This is point No. 1 that sport can teach. And the second point is that it teaches you, or at least it taught me, that you can win if you train hard enough and if you play hard.

You also opened a small English-style pub in Munich in the late 1970s. How does that experience translate?
HH: The pub was a small business, but it was my own business, and I learned that I couldn’t spend more money than I had in income. It’s the same at Adidas. Of course, it’s a more complex situation and therefore we have many more people, but in general, it’s the basic rules that drive a business.

What do you hope your employees would say about working with you?
HH: That they had fun with me. No, I’m sorry, let’s put this in a different way. I would say, that they liked to work with me. Because fun sometimes seems like, hey, they were just celebrating, and this is not what I mean. We have to be successful, otherwise I would not be here six months from now. But people should like to work with me. This is what I would say.

[Editor’s note: This article was updated to include the company’s preliminary earnings results for the first quarter of 2012.]