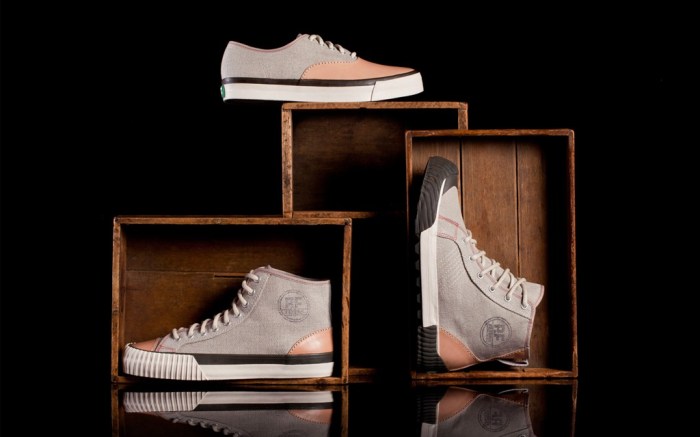 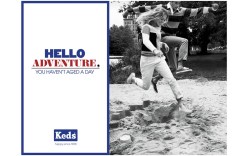 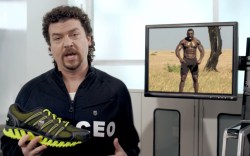 Flying High
After 75 years, PF Flyers is ready to celebrate. The brand will launch a three-part campaign for spring, including print and digital ads featuring the tagline “Authentic American Style;” a revamped website, which will include a new video series; and a capsule collection of three unisex styles launching at select retailers in May. “Both internally and externally, anyone who has seen the product is pretty excited about the 75th collection,” said Victor Aviles, strategic business unit manager for the brand. “I’m confident that the [line] will do well and will help in authenticating our position in the market as the classic American sneaker brand.” The video series, which will run on the relaunched site through the end of the year, will feature interviews with fans of the brand. Up first: Ouigi Theodore, founder of Brooklyn Circus. “The impact of the launch will be felt worldwide and also introduce us to consumers who may not know about our rich history,” said Aviles.

Happy Days
The tagline “Happy Since 1916” will introduce Keds’ spring campaign. Shot by photographer Cass Bird, the black-and-white advertisements showcase models having fun in New York. The tagline will be the only pop of color, printed in red, white and blue. “This campaign really celebrates Keds’ happy, spirited style,” said VP of marketing Stephanie Brocoum. “Our new tagline reinforces our heritage and calls to mind the happy, playful times that consumers associate with Keds.” The ads, which first hit on the brand’s redesigned website late last month, showcase classic styles such as the Champion, as well as newer additions, including the Skimmer and Chukka. Models also are outfitted in the new apparel line, which launches for spring ’12 exclusively at Opening Ceremony. Additionally, in April and May, the ads will run in print magazines, and in-store marketing will begin in April. “This campaign will visually bring to life the world of Keds and establish an emotional connection with the brand,” said Brocoum. “The campaign reinforces why Keds is relevant to our young, connected consumers — from showcasing Keds’ personality to the different wearing occasions for our iconic Champion silhouette.”

Kenny’s Farewell
K-Swiss is giving Kenny Powers one last hurrah. The Westlake Village, Calif.-based brand late last month launched its third campaign featuring the lead character of HBO’s “Eastbound & Down.” It will be the final installment of the viral videos. “What’s nice about [it] is that there’s already a built-in audience that’s seen the first two,” said K-Swiss EVP David Nichols. “It’s also tied into the show’s third season on HBO, so there’s a lot of hype and attention to the character that we’re able to jump onto as well.” Last year’s online spots garnered Mashable.com’s “Most Innovative Viral Video” award and Athlonsports.com’s “Best Sports Video of the Year” honor. Nichols added that the series of “not-safe-for-work” videos currently live on the sites Funnyordie.com, Break.com and YouTube, and have helped the brand target a key demographic of young, athletic-minded males. To complement this year’s online short, which has already garnered more than 150,000 hits on Funnyordie, TV ads promoting K-Swiss’ Blade-Max shoes will also air on ESPN throughout this month. And Finish Line locations throughout the country have in-store displays. After the campaign wraps at the end of spring, Nichols said K-Swiss’ marketing strategy will switch gears. “A lot of our messaging is going to go back to our classic product,” he said.