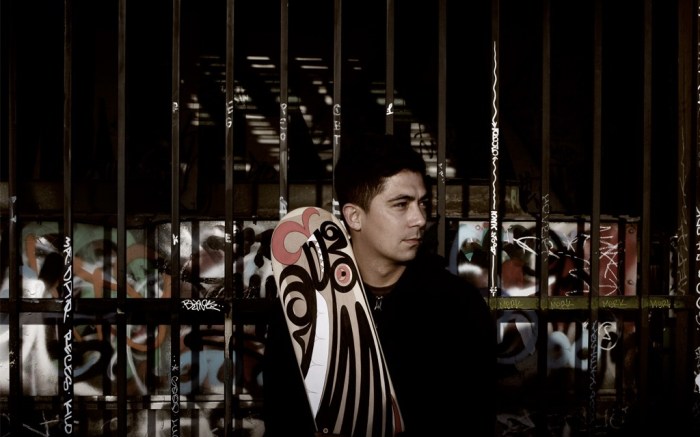 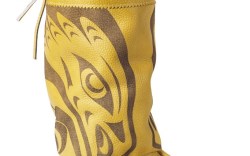 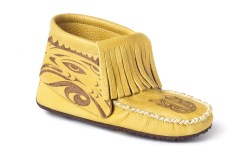 Activist Louie Gong uses shoes as an artist’s canvas and a way to communicate his messages. The Canadian native tells of the challenges of maintaining a strong cultural identity in the modern-day world through his art.

“I use art as a tool for sharing information about the things I think are important,” said Gong, who first took a Sharpie to a pair of Vans in 2009 for his interpretation of Coast Salish art, the tribal art of the native people in the Pacific Northwest region. It wasn’t long before he garnered a following for his one-of-kind looks through word-of-mouth and social networking, selling custom designs for $200 to $400.

Gong will next embellish boots from Manitobah Mukluks, an Aboriginal-owned footwear company based in Ottawa, Ontario. For the brand’s Signature Series, Gong will decorate two styles: the Gatherer, a tall nappa leather boot featuring an eagle design; and the Paddle, a boot featuring a thunderbird motif. The eagle is a cross-cultural symbol of strength, leadership and long-term vision, while the thunderbird, according to tribal beliefs, represents potential and strength. Set to retail for $149 for the Paddle and $299 for the Gatherer, the two styles will deliver in August to specialty retailers and independents.

And as a full-time educational-resource coordinator at Muckleshoot Tribal College, Gong also is encouraging the younger generation to express themselves through art by holding workshops at public schools and for nonprofit groups. He challenges children to decorate their own pairs of Vans. “Kids don’t [always] have the opportunity to wear something that has an identity of who they are as people,” he said. “Blank shoes give them an opportunity to express their identity. It’s starting the process of [asking themselves], who am I?”