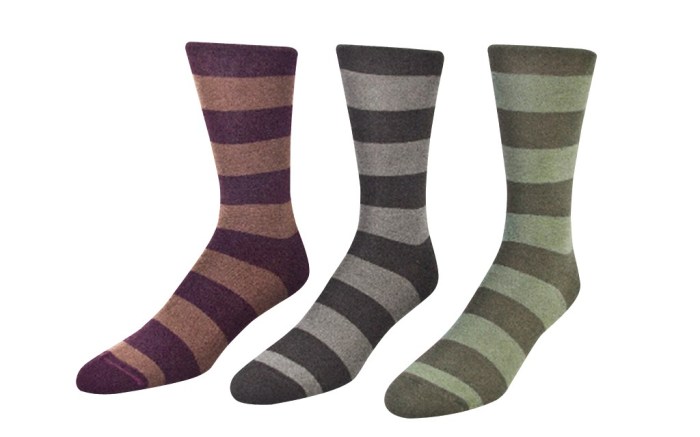 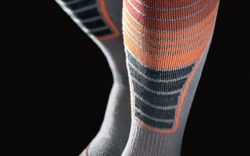 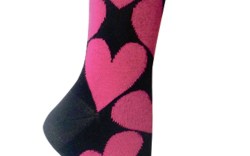 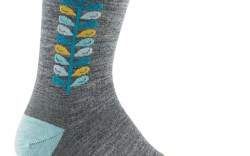 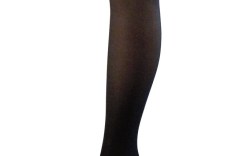 Earth Tone
Etiquette Clothiers has a new collaboration up its sleeve. The New York-based brand will debut its exclusive line of men’s socks in collaboration with fashion designer Robert Geller for July. The line, first introduced at Geller’s fall ’12 presentation during New York Fashion Week, feature two-toned stripes with earth-toned accents. The socks will be available at Fred Segal and Mohawk General Store in Los Angeles, as well as Etiquetteclothiers.com, for $26 per pair or a set of three for $78.

Smart Move
SmartWool is developing its PhD line even further. The fall PhD performance sock collection by the Steamboat Springs, Colo.-based brand will offer the 4 Degree Elite Fit, which consists of four elastic bands placed strategically in the sock to improve fit and comfort. In addition, ReliaWool Technology was added, which places merino fibers and wool in high-impact areas such as the heel and toe to help with cushioning. The line will retail from $14 to $40 at REI, Eastern Mountain Sports and other specialty outdoor stores.

Pretty in Pink
The legwear collection at Steve Madden is about to get bigger. The Long Island City, N.Y.-based line, which previously consisted primarily of socks and tights, will this fall include legwarmers, leggings and boot liners. The patterns feature heart and stripe patterns, as well as pink hues. With price points between $6 and $18, Steve Madden Legwear will hit stores including Macy’s, Dillard’s, Nordstrom, DSW and Steve Madden locations in July.

Design Focus
Performance sock company Darn Tough Vermont will add a designer look for fall. Two new styles, the Mini Flower Crew and the Dots Crew, were created by guest designer Poppy Gall. The styles will be available in various colors such as gray, purple, yellow and blue. The looks are priced at $19 and will be sold at select outdoor and women’s specialty retailers, as well as online at Shoebuy.com.

Satin Touch
German-based brand Falke is giving women a satin finish. The brand will launch its new line of hosiery, called Pure Shine 15, for July. Pure Shine 15 is made from polyamide fiber, which is designed to provide a slight shimmer and satin-like finish. Falke’s new line will retail for $14 to $70 and be sold at Bloomingdale’s and at Barenecessities.com.

Winter Warmth
Merrell’s wool socks are getting an update. The brand, owned by Wolverine World Wide Inc., will add moisture resistance technology to create MerinoMax wool socks for an August launch. Women’s styles range from $15 to $20, with men’s styles at $16 to $20. Both will sell at DSW and on Zappos.com