Kangaroos Jumps Back into U.S. 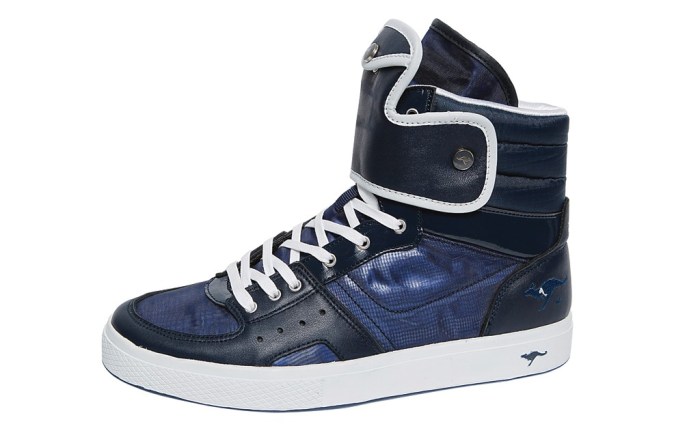 The company, which has been steadily relaunching classic labels, is expected this week to unveil its latest project: a revamp of Kangaroos.

Better known by sneakerheads as Roos, the shoes came to prominence in the 1980s, thanks to their playful placement and usage of zippered pockets. But after several failed attempts to recapture its luster, the brand was largely removed from the U.S. market in 2009.

Now Pentland, which owns the brand and began licensing the U.S. rights to the Eastman Group in early 2011, is collaborating with twin designers Shane and Shawn Ward, who will split time equally with their eponymous label.

“We had to come back with something that would be worthwhile,” said Sonny Shar, president of Pentland USA. “We believe we have two young guys who have a lot of vision and zip, and along with Eastman, can take the brand into the lifestyle categories.”

The 18-SKU collection, to be called Roos–Shane & Shawn, will launch in August with men’s and women’s styles retailing for $60 to $100. A kids’ line, along with hats, T-shirts and totes, will be added for spring ’13.

Executives said the sneakers are aimed at trendy 18- to 28-year-olds and pay tribute to the brand’s heritage with updated takes on pocket placement, sole treatment and nylon integration.

“If you come out with a retro brand and just change a couple of colors, it’s not going to work,” said Shane Ward. “It needs to be on trend, [and we worked hard] to make sure the silhouettes and materials are right on with consumers. Then we integrated the pocket into that story.”

“We are excited about the level of style that Shawn and Shane have brought to the brand,” said Ronnie Jefferson, VP for lifestyle and kids’ footwear at Finish Line Inc. “Their genius touch is evident in the fashion-forward look, the fresh material story and the range of styles.”

Shar said the line will launch in 75 Finish Line doors.

It also debuts at all Sportie LA locations and three other independents. “We supported Kangaroos early on. We did well initially with it, but then it tapered off,” said Sportie LA co-owner Isack Fadlon, who is buying fairly wide into the collection. “We are excited to see the brand relaunch.”

To get the word out, the brand will unleash a marketing campaign that relies on the Wards’ promotional abilities and social connections. Shawn Ward said they would amp up their TV appearances, aim for celebrity product placements and create a viral video that documents the entire launch process.