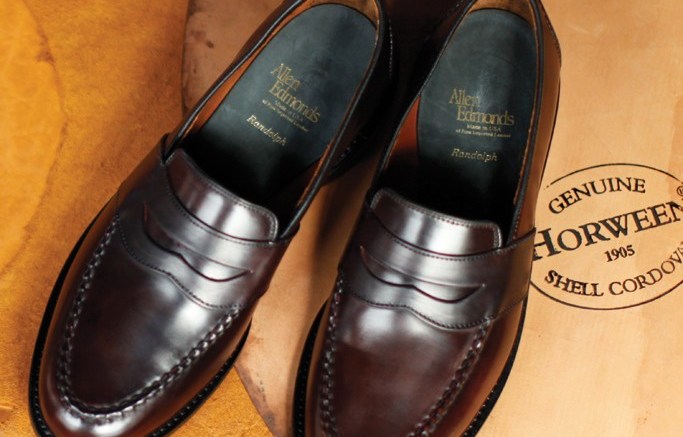 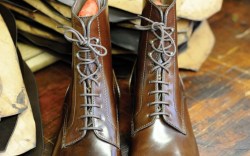 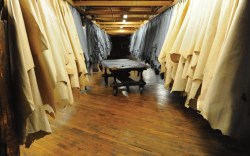 In business for more than a century, the Chicago-based tannery has earned a reputation for its near-obsessive commitment to quality and making leathers the old-fashioned way. That tradition has been an asset for the family-owned firm as the made-in-America movement continues to grow in the footwear industry.

“The trend has really gained traction, and it’s been great for our business,” said Arnold “Skip” Horween III, chairman and president, who is the fourth generation to run the company. “People appreciate things that are authentic, that have a real story. Our company has fought its way through difficult times, and that’s our ultimate hope, that people recognize the value in what we’re doing.”

Leather produced for footwear companies comprises 40 percent of Horween’s sales, with leathers for sporting-goods items (such as footballs, basketballs and baseball gloves) accounting for another 40 percent, and the remainder coming from other products including apparel, bags, belts and small leather goods. In an average week, the firm processes around 3,000 cow and horse hides in its five-story factory.

In the footwear world, Horween is best known for its shell cordovan, used by such upscale brands as Alden, Allen Edmonds, Crockett & Jones and Rancourt & Co. In a meticulous process that takes more than six months, the shells are tanned, shaved, hot stuffed (infusing leather with oils, greases and fats that are solid at room temperature) and hand polished, creating a rich, glossy look.

“It’s the leather our company was founded on, and we still use the very same formula and traditional techniques,” said Horween, who is joined in the business by his son Nick, who serves as director and quality manager. “[The result is] a beautiful, durable piece of leather that turns into fabulous dress shoes.”

Due to long lead times, however, the tannery can’t take on new customers for its cordovan, he said. “We have a lot of new people interested, but it’s a limited product. And our first loyalty is to our core clients, many of which have been with us for decades.”

Horween also specializes in Chromexcel, a proprietary pull-up leather that undergoes more than 90 separate processes to achieve its deep aniline, hand-rubbed finish. “We use a secret blend of natural oils and greases and let the leather air-dry naturally,” Horween said. “The process takes longer and causes the leather to shrink, which isn’t good for our yield, but the final product is really fantastic.”

It’s also pricey, he admitted. The company’s leathers average about $50 a foot, and Horween isn’t looking to change that. “We’re expensive, but for a reason. It’s about making something special. We pay attention to quality first and price second,” Horween said. “We find people really recognize and appreciate the difference and are willing to pay more for it.”

Allen Edmonds is among them. Jim Kass, VP of manufacturing for the Port Washington, Wis.-based men’s brand, said Horween’s heritage as a century-old American company is strongly reflected in the superior quality of its leather products. “Skip and Nick learned the business from the generations of family members who came before them. They have not compromised on techniques or recipes or made any other shortcuts that might diminish the end product,” Kass said, noting that Allen Edmonds, a U.S. producer itself, strives to source its raw materials domestically whenever possible. “[Horween is] an authentic American manufacturing icon.”

Still, Horween is competing against lower-cost suppliers in China and elsewhere. The dominance of the overseas market continues to challenge Horween and the other 30 or so U.S. tanneries still in operation to maintain their foothold. “When the industry started to [take production overseas] in a huge way 20 years ago, it got to be difficult for us and we had to downsize,” Horween recalled. “Companies were really taken with the savings they could get with leathers made in other places. Our price structure just didn’t fit. It’s something we’re still fighting against.”

Rather than compromise by cheapening its products, the tannery has concentrated on what it does best. “We’re a niche producer; we identify niches and are always looking for new ways to apply our specialized knowledge,” said Horween. “We also do things other tanneries stopped doing a long time ago, such as hot stuffing, and that sets us apart.”

Despite the challenges, envisioning the end product for its leathers keeps the company focused and motivated, Horween said. “We consider ourselves a raw materials supplier — we’re not the show,” he said. “We look at it as providing a sculptor with good marble. The real skill lies with the shoe companies, which turn our leathers into something really great.”