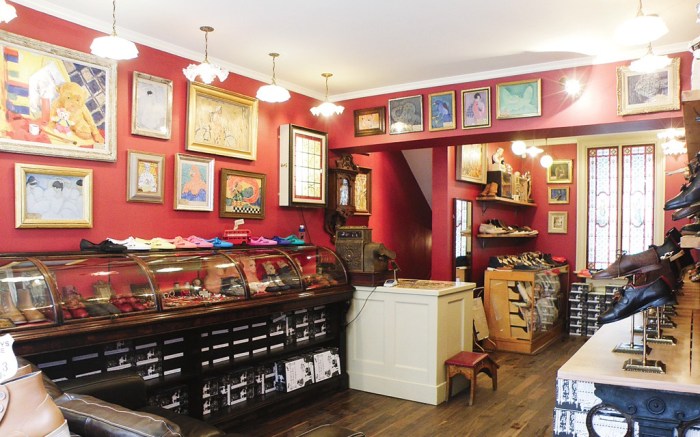 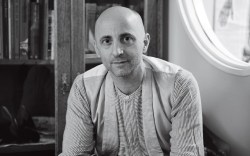 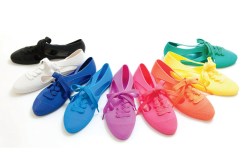 F-Troupe has come a long way.

The London-based women’s brand, which celebrates its 10th anniversary next year, started its first season with six wholesale accounts. Today it boasts more than 150 wholesale partners in 24 countries.

“Our long-term goal is to keep growing, but at a slow and steady pace,” said founder and designer Mick Hoyle, who bowed F-Troupe (the name is a play on the title of the 1960s American sitcom “F Troop”) in 2003, after 20 years of working in retail and sales. “I was representing footwear brands and doing distribution, but I found it hard to find things I liked and things that inspired me, so I started designing.”

The self-taught designer, who now works with a staff of nine, incorporates his love of history and flea-market finds into footwear styles that range from a neon all-rubber “bathing shoe” sneaker to a nubuck clog — all with whimsical twists. Details such as tweed uppers, multiple bows, star prints and pebble-textured military-grade leather hearken back to some of Hoyle’s favorite historical periods: Victorian times, the Georgian era and the two world wars. Manufactured in Asia, Portugal and the U.K., the shoes retail for $50 to $300.

Ty McBride, brand manager for retailer Solestruck, said F-Troupe’s offbeat looks resonate with his store’s customers. “We are drawn to the unique styling, the sense of quirkiness and the consistency we see in the overall product,” he said, noting that both his Portland, Ore., brick-and-mortar store and e-commerce site do well with the brand. “Many F-Troupe retail customers are repeat; there is a bit of a cult there. In a sea of same-looking brands, F-Troupe has found a way to punch up the details while still keeping the product realistic, wearable and appropriate for the market.”

Hoyle has used the same aesthetic for the London flagship store, which opened in 2010. There, the women’s shoe styles sit among quirky antiques, such as faded photos in ornate frames and taxidermy squirrels circa 1880, as well as a small selection of F-Troupe men’s footwear.

“We’ve had a lot of success with our London store,” said Hoyle. “Our growth plan is to look at [adding] new stores.” The label is projected to bow more branded doors over the next few seasons, including a second London location by the end of 2013.

Wholesale also continues to be a healthy area for the brand. Although F-Troupe’s main market is still the U.K., the label is expanding its U.S. presence through department stores, independent boutiques and e-tailers. Some of the brand’s strongest partners here include Barneys New York, Urban Outfitters, Anthropologie and American Rag.

American Rag has carried F-Troupe since 2007, but buyer Lindsey Allen said the brand has stepped things up in recent seasons. “It is becoming a lot more fashion-forward,” she said. “It offers a really unique style at a good price point, and that’s not something you can find in a lot of places.”

Next, F-Troupe will show its most diverse collection so far at Capsule in Las Vegas this week. “[For spring], we are trying to make [our products] slightly more accessible in terms of both design and retailers,” said Hoyle. Still, he added, F-Troupe does not follow trends. “We just do what we like. Sometimes [a collection] happens to fall on a trend, and when it does, we tend to have a better season. Now that we have our own store, we are kind of led by the customers there, as well as our wholesalers.”

And the brand is in the process of relaunching its website to accommodate an increasing e-commerce customer base. Online transactions make up approximately half of the company’s sales, according to Hoyle. The firm also will increase its focus on Facebook and other social media in 2013.

Also on the horizon are F-Troupe boutiques in Asia. “We’ve been approached to open a store in Tokyo and another in Hong Kong,” Hoyle said. “For us, the Japanese market especially is really good. The consumers seem to appreciate the brand, and they [understand] the design elements. In Japan alone, we have 60 wholesale accounts, so it feels like the natural progression would be to have standalone stores there.”

Identifying new markets has been a boon for F-Troupe, which Hoyle said has experienced some fallout from recent global economic woes. Revenues increased only slightly between 2011 and 2012, according to Hoyle. “Cash flow and payments are a big hindrance, but we have had steady growth,” the designer said. “I am a lot more optimistic than I have been, although we will exercise caution in the way we work. We are being really selective about where we sell and who we manufacture with. The Web also is a massive growth area. It seems to be the new way of life in the gloom of the modern world.”

And while F-Troupe customers can expect the brand to have a larger presence both online and off going forward, Hoyle said new product lines aren’t part of the label’s immediate plans. “We’ve often talked about diversifying and doing other products,” he said, “but it always comes back to the fact that there’s so much more we could be doing in shoes.”