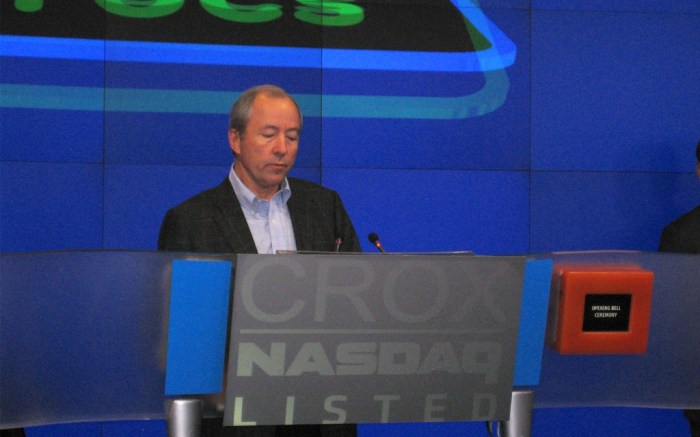 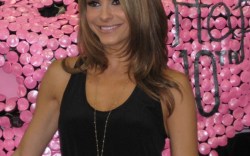 After a decade of financial ups and downs, Crocs Inc., based in Niwot, Colo., celebrated its 10th anniversary by ringing the morning bell at the Nasdaq stock exchange on Tuesday.

On hand to celebrate the milestone was CEO John McCarvel, company founders George Boedecker, Scott Seamans and Duke Hanson, in addition to the Crocs executive team. Sharing the spotlight was Maria Menounos, former “Dancing With the Stars” contestant and host of TV show “Extra.”

The morning got off to a sweet start with the presentation of Crocs’ iconic clog made of 2,000 mini cupcakes supplied by Georgetown Cupcake owners Katherine Kallinis and Sophie LaMontagne. Stars of the TLC reality show “DC Cupcake,” the sisters operate a bakery down the block from Crocs’ Soho New York store.

Crocs, which hit $1 billion last year, is prepping for another decade of growth, according to McCarvel.

“The amount of distribution we have for a young company has been key to our success and survival during those difficult years,” said McCarvel. “Over the next three to five years, we want to continue to get our new, innovative product in front of new consumers.”

For this year, McCarvel projected Crocs’ business to be up between 15 percent and 20 percent based on constant currency. “We won’t be as strong in the back half of the year,” he said, “but third quarter should be good.”

Looking ahead to next year, McCarvel noted the company plans to offer a broader product assortment, taking it out of its clog roots and styles that include wedges, flats and sandals. The company also plans to put more emphasis on back-to-school styles.

Crocs has a presence in more than 90 countries, said McCarvel, with Asia its strongest region and Europe its weakest. There are now 35 Crocs stores in Europe, said McCarvel, who would like to see that number hit 60 by year’s end. To that end, the company opened a store in Nice, France, last March that caters to a large tourist trade.