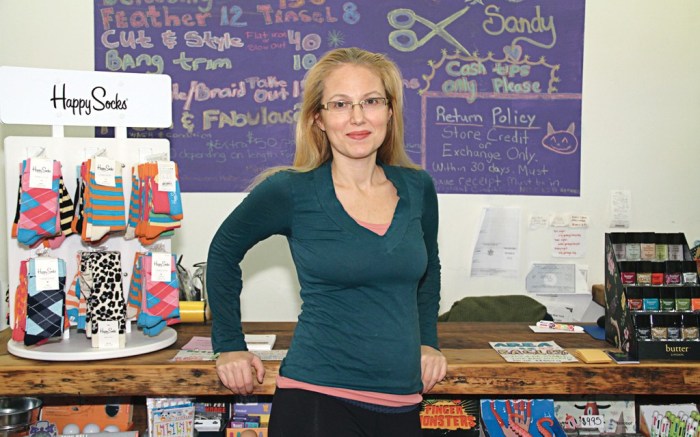 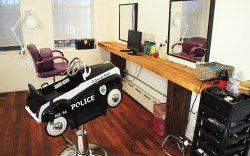 Area Kids takes a head-to-toe approach to its business.

Owner Loretta Gendville, a Brooklyn resident and mother of three, said the idea is to offer parents a convenient, frustration-free way to tackle two errands at once. “Kids always need haircuts, and now they can come in and get fitted for a new pair of shoes at the same time,” said Gendville, whose growing retail empire also includes nine Area Kids locations, two yoga studios and a spa. “Customers are really loving the concept. We’re already seeing a lot of repeat business.”

Derek Lecours, Northeastern sales rep for Tsukihoshi, said that combining the store and salon under one roof is a smart strategy. “Anytime there is an opportunity to make parents’ time more efficient while adding value to your goods and services, such as offering both haircuts and shoes, it’s a win-win [situation],” he said. “It’s also [a great way for] independents to differentiate themselves.”

Hilary Beck, a rep for In Play Showroom, the children’s sales agent for Native Shoes, agreed: “Given the number of different ways people are now able to shop and the access they have to pretty much anything they want on the Internet, thinking outside the box to get your customers in the door and coming back is a must. We’ve seen good success with businesses that combine a store and salon.”

Gendville said Kicks & Cuts came about organically when the leases became available on two prime storefronts along bustling Smith Street and Fifth Avenue in Brooklyn. “I didn’t want to pass up the spaces, so I had to make a decision whether to turn them into additional Area Kids stores or do something completely different,” she said. “Footwear is a category I’ve been wanting to get into, but I’ve never had the space in my other stores. This seemed like the perfect opportunity.”

Gendville renovated both locations, which measure 700 and 1,200 square feet, respectively, giving them a minimalist look with chocolate hardwood floors, tin ceilings and salvaged wood shelves. The salon and retail areas are clearly defined but flow together naturally to encourage cross-promotion. Kid-friendly features such as large fish tanks, flat-screen TVs and car-themed styling chairs liven up the space. “We know kids don’t always enjoy getting their hair cut or getting fitted for new shoes, so we’ve tried to make the experience fun for them,” Gendville said.

The stores stock a wide selection of footwear from brands including Tsukihoshi, Stride Rite, Robeez, Native, Naturino, Primigi and Steve Madden, as well as impulse items such as bubbles and toys. Gendville plans to bring in Bogs boots this winter and add Vans sneakers and Keen and Salt-Water sandals in the spring.

She noted that buying for the new stores has been more challenging than for her clothing shops. “Footwear requires a much bigger inventory commitment, so it’s been difficult balancing our mix and making sure not to overbuy,” she said. “I’m learning as I go and hoping not to make too many mistakes because that can be costly.”

When it comes to marketing, Gendville relies heavily on word of mouth. “Park Slope and Carroll Gardens are just saturated with kids, and moms are great about spreading the word,” she said. “Also, people in this area tend to go out of their way to shop local businesses, so that helps us a lot.”

Gendville also is promoting Kicks & Cuts through her other stores. “We hand out flyers and coupons, and all my stores kind of advertise each other,” she said. “That [strategy] is working well, but I’d definitely like to do more marketing in the future.”

With the Kicks & Cuts stores off to a strong start, Gendville said she hopes to expand the concept to other Brooklyn neighborhoods. “If after the first year the stores continue to do well, I probably will open a couple more locations,” she said. “There is definitely potential for expansion.”