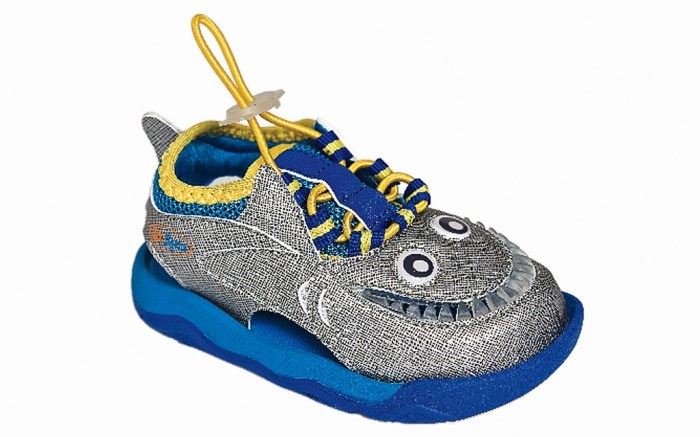 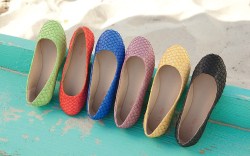 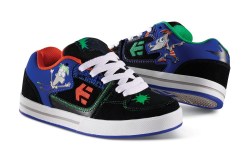 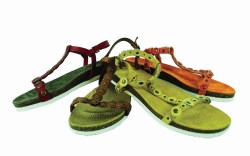 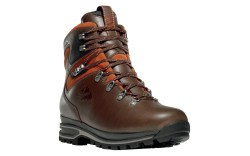 Water Works
Bedford, Mass.-based Zooligans is adding a line of water sandals to its offering. The Water Fun collection, launching for spring, offers colorful, lightweight styles detailed in shark (at left), fish, turtle and frog designs. The shoes are completely waterproof and feature animal skin-inspired textures, as well as UV-sensitive color-changing lips and teeth. Available in toddler sizes 4 to 12, the sandals will retail for $45.

Sister Act
Miz Mooz is moving into the girls’ market. The 8-year-old brand, known for its quirky, eclectic aesthetic, will debut Lil Miz for spring. Targeted to tweens, the line, available in sizes 11 to 5, offers a range of colorful, fashion-forward styles including moccasins, Mary Janes, ballet flats (below, left), wedge sandals, boat shoes and wingtip oxfords. Roughly 80 percent of the line consists of direct takedowns from the women’s line. Lil Miz is priced from $50 to $60 and will begin shipping to major department stores and independents in February. Children’s sales rep Alan Feigenson has been tapped to lead the new division for the New York-based firm.

Toon In
Etnies is adding some character to its kids’ offering. The Lake Forest, Calif.-based company is introducing a new sneaker collection inspired by the hit Disney Channel animated series “Phineas & Ferb.” Slated to debut in October, the line features four classic Etnies styles, each in multiple colorways: the Fader, Callicut 2.0, Ronin (above) and RVM Vulc. Additional styles will roll out for spring ’13. Available in sizes 10 to 7, the shoes are detailed with brightly colored graphics of the show’s quirky cast of characters, among them Phineas, Ferb, Perry the Platypus and Dr. Doofenshmirtz. The line is priced from $55 to $60 and will be sold by retailers including Zappos.com, Famous Footwear, WSS and Foot Locker Europe.

Yin Again
Pantha Imports Ltd. will reintroduce Italian women’s brand Yin to the U.S. for spring . The label, which has been absent from the American wholesale market since 2008, includes casual sandals and boots with retail prices ranging from $130 to $200. Pantha Imports is targeting independent retailers, as well as e-tailers and department stores such as Bloomingdale’s and Nordstrom, and the product is slated to hit shelves in February. Pantha Imports founder and president Michael Abrams, whose company also distributes Beverly Feldman and Heart Throb (a new label that launched for fall ’12), said exchange rates and higher production costs in China have made Yin and other European brands more attractive to distributors and wholesalers.

Take a Hike
New from Danner for spring ’13 is the Crag Rat, a heavy-duty backpacking and hiking boot for men. The brand, a division of Portland, Ore.-based LaCrosse Footwear Inc., will offer the style with a full-grain leather upper with Gore-Tex waterproofing and a Vibram outsole. A molded polyurethane footbed provides support, and a Pebax framework underfoot adds energy return and won’t compress no matter the weather. The $260 style will deliver in January to outdoor shops.

Gone to Ground
Rockford, Mich.-based Chaco, a division of Wolverine World Wide Inc., is creating its own take on minimalism for spring ’13 with the NearGround collection for men and women. It boasts the brand’s lightest and thinnest midsole and outsole package to date. Consisting of sandals (below), flip-flops, a Mary Jane and closed-toe water-friendly sport shoes, the line is built on a lower-profile — but more cushioned — version of the brand’s signature molded footbed. Certain shoes in the collection also feature a new adjustment system for woven uppers that uses a D-ring as the fastener. Styles range from $60 to $100 and will deliver in February to outdoor specialty stores and footwear independents.

Ride the Rapid
Scarpa, the Italian mountaineering brand, will launch a new multiuse trail runner for spring ’13 called the Rapid LT. The $110 men’s style features a fabric-and-leather upper, a 6-millimeter drop in the midsole with a foldable heel counter for travel and lightweight performance, as well as a stickier-than-usual rubber outsole to make the shoe a versatile descent or multisport style. The Rapid LT will deliver in February to outdoor shops.

Lighten Up
Italian brand Tecnica’s new Tornado Mid GTX style, launching for spring ’13, is all about light hiking. The $175 style for men and women has a slight rocker bottom for forward propulsion, a dual-density EVA midsole for cushioning, a Vibram outsole and Gore-Tex waterproofing protection in a nubuck upper. The Tornado will deliver in March to outdoor accounts.