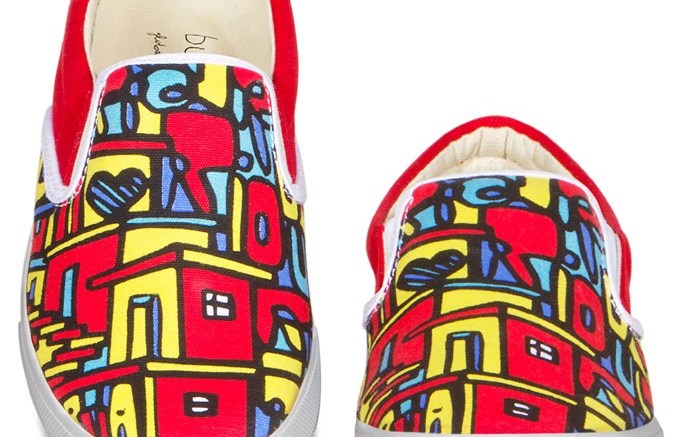 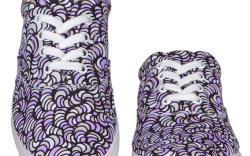 Raaja Nemani and Aaron Firestein treat their new shoe line like artwork. The co-founders of Chicago-based Bucketfeet use simple canvas silhouettes to showcase the work of up-and-coming artists.

The partners met in 2008 while volunteering at a children’s organization in Argentina. While there, Firestein was invited to do a photo documentary in which he shadowed street artists in Rio, photographing their lives and work. It sparked an appreciation for unsung talent.

“Artists from around the world who don’t get an opportunity to showcase their talent [now can],” Firestein said about Bucketfeet, which launched in 2011 as an online business at Bucketfeet.com. “They can use footwear as a platform.”

Participating artists are paid $250 up front for their designs, in addition to $1 for every shoe sold. Currently, eight artists have signed on, with 12 others slated to debut this fall. Even Firestein is among the artists whose work appears on the footwear.

Today, online sales account for about 45 percent of Bucketfeet’s business, with the remainder done through roughly 50 brick-and-mortar stores around the world, including the Uprise skate shop in Chicago, Kitson Korea and Urban Research in Japan.

“Things are coming together,” said Firestein, adding that the duo brought on private investors earlier this year and built up its sales team. “We are now into phase two.”

The business is divided evenly between the men’s and women’s categories. Styles consist of three slip-ons and two laceups, each retailing for $65. All incorporate padded footbeds with massage bubbles.

To further promote the work of their collaborating artists, Bucketfeet places cards in each shoebox with information on their backgrounds and links to their personal websites. “We tell the stories of artists,” said Nemani. “We create connections with people from around the world. It’s our passion to spread their art.”

And while footwear is the brand’s focus, the partners could possibly turn the line into a lifestyle collection. “We don’t want to spread ourselves too thin too early,” said Nemani. “However, there are natural product extensions, even textile designs.”