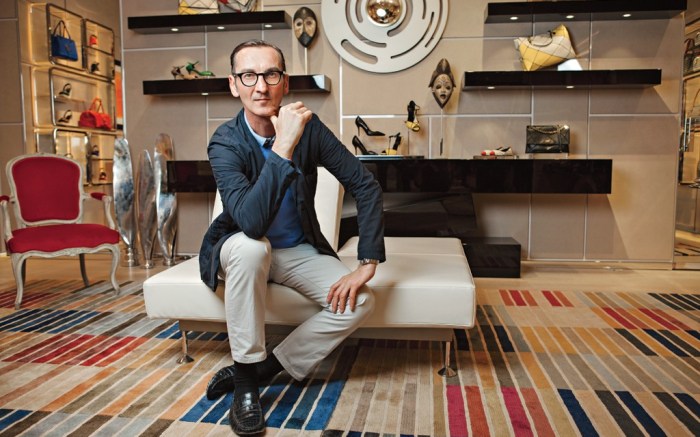 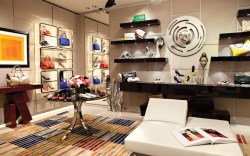 The designer carefully studies a woman in her late 20s who is trying on a pair of red pumps with the label’s signature buckle. As she bends to glimpse the shoes from every possible angle, Frisoni approaches her with another pair of canary-yellow heels, suggesting the red style isn’t really working for her. She happily slips them on, clearly satisfied with the new choice.

“I know what looks good,” Frisoni says a few minutes later, after walking away without introducing himself to the shopper. “I could see she was not looking young in [those red heels]. She looked fantastic in the other ones.”

Frisoni’s discerning eye and innate sense of style has been critical to the recent success of the storied Vivier label, which is growing at an impressive pace in spite of economic woes in Europe and the U.S.

During the first quarter ended March 31, the brand almost doubled sales to 12.9 million euros, or $16.9 million, from 6.6 million euros, or $9.2 million, in the same period last year. (Dollar amounts have been converted at average exchange rates for the periods to which they refer.)

Frisoni, who joined Vivier in 2003, admits it’s easier to steer the label now that it is his sole focus — he closed his namesake line in 2010. “It was a difficult decision to make, but it’s a life choice in the end,” Frisoni said. “I love what I do and I love my work, but I also want to be more relaxed.”

Now Frisoni, together with Vivier’s parent company, Tod’s SpA, is escalating growth plans, although the team wants to be careful not to overextend the brand. Following the debut of Vivier’s South Coast Plaza store — its third boutique in the U.S. — Frisoni will oversee two openings in China this fall, in Beijing and Shanghai.

And the designer, who also recently held court at the opening of a Vivier retrospective at The Bata Shoe Museum in Toronto, is busy expanding the collection. Most notably, this past spring marked the launch of the Prismick collection, which for the first time includes styles without the label’s iconic buckle.

Here, Frisoni discusses his relationship with Tod’s chief Diego Della Valle, his love of Los Angeles and the importance of creating an intimate store environment.

As creative director of such an iconic brand, do you feel pressure to live up to the Vivier name?
BF: The pressure is always there. It was there from the start. It’s probably growing because maybe there is more attention now. At the same time, you are lifted by it. Being successful and selling are two beautiful things. It’s only good.

What’s it like working with Diego Della Valle?
BF: He’s an entrepreneur. I’m the designer. We fight, but we love and respect each other. He’s a fantastic man to work with. We fight because we are two very strong people and [have strong feelings about] what we think we should do. I’ve learned a lot from him about strategy and marketing. He made me have some respect for marketing, which I didn’t before.

How do you balance the heritage of the brand with creating sexy, modern shoes?
BF: I never analyze this too much. For me, everything is so organic. [For as long as] I’ve done shoes, they’ve always been sexy. I never think to do it — it just has to be. When I work on the shape or the last or the cut, if I see it and it doesn’t have a sexy or a sensual feeling, I drop it. And I always love what [the late Roger] Vivier did. We have many things in common. It’s not so difficult for me to be true to Vivier. I feel very free.

You seem to genuinely enjoy people. Where does that come from and how does it play out in your designs?
BF: I think it’s genetic. My father is a very talkative person. He connects with people, and I love to know people. [Similarly], the brand is very intimate.

How has that impacted your approach to retail?
BF: We want to [convey] that you can stay as long as you like. You can come with friends. You can have a coffee. You can try something on, or not. You can buy, or not. But [we want you] to feel good and feel that it’s a very special place.

This store is your first on the West Coast. What do you like about the Los Angeles area?
BF: I love the people here and the way they live. I love the relaxed [vibe], the culture, the landscape. California is a positive place and I like that kind of life.

Do you miss having your namesake collection?
BF: I didn’t have enough time for my own line to make it really important and to do it as I wanted. Work is a lot of time in my life. I want the time to live and to be with my friends and to spend time doing something else, and to regenerate myself. I realized the best thing was to put it on hold.

Would you ever consider relaunching it?
BF: Yes, if I find the right partner and if everything is right. But business is very difficult. Being small is not easy.

What other categories would you like to see Vivier move into?
BF: Today, we do everything, from bags and shoes and small leather goods to perfume and glasses and jewelry. [Going forward], we may be [slower in] extending [into new categories] so much. [I don’t want to do] men’s shoes and [we have no plans for] clothes yet.

The Prismick collection is the first time you aren’t incorporating the iconic buckle. How significant is that?
BF: If you look at what made Vivier strong, it was the buckle. We pushed it a lot because it’s an iconic story. It has been in every collection. For five years, I’ve been working on geometric elements that are more like sculptural pieces, like limited-edition pieces. I decided to [incorporate these looks] into a collection without the buckle. It’s not a sub-collection. You have the buckle and then you have Prismick.

You have a lot of celebrity fans. What does it mean to see them in Vivier shoes?
BF: It’s a great compliment. They feel good in the shoes, good enough to stand in front of a lot of people in a very special moment [on the red carpet]. There is a lot of pressure on them.

Has celebrity support impacted sales?
BF: Yes, Leighton Meister wore a pair on “Gossip Girl” and the shoe was sold out almost immediately.

In the grand scheme of things, how will the Frisoni era be defined in the history of the label?
BF: It’s not for me to tell. I don’t want to look at my work and think about what is going to be important for people [in the future]. I just do.