Brooks Sprints Ahead in Running 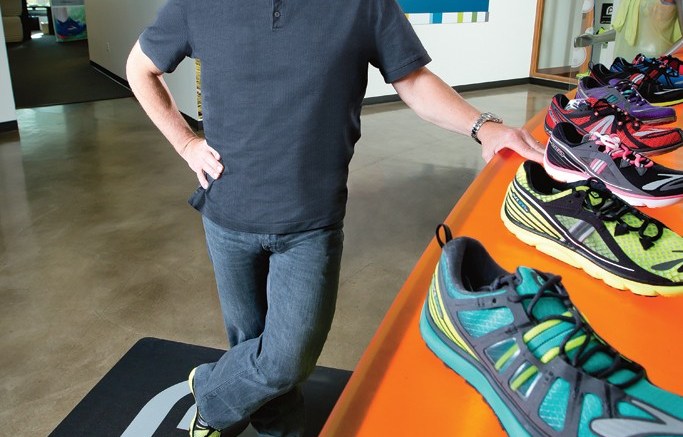 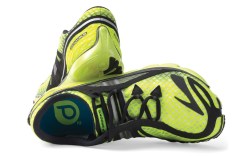 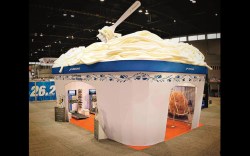 As chief executive of Brooks Sports Inc. — and as both an avid runner and charismatic champion of the sport — Weber is in the unique position of being able to test and critique most of the company’s products before their release. It’s a corporate perk that Weber believes is crucial in giving him a head start on the leaders of rival athletic firms.

“We are not managing a business or a brand — we are creating one,” said Brooks’ president and CEO. “As we try to push the envelope on product, testing the merchandise has been essential for me. I’m not sure how the product team views my input, but when I’m out running with new gear, they’re going to get feedback from me.”

The powerful combination of Weber’s insight and inventions by the team at Brooks — along with favorable trends in the health and active-lifestyle categories — has helped the company make major strides in the running category in recent months.

The Bothell, Wash.-based firm took over the top spot in the specialty running channel last year — ending Asics’ long reign — and had captured 29 percent through August of this year, according to Leisure Trends.

Gaining that No. 1 position was a key element to Brook’s financial growth this year. According to company figures, sales across all channels rose 49 percent through the first half of 2012, against the same period last year, and backlogs for next spring are up 36 percent. Brooks expects to finish the year with revenue surpassing $400 million, a marked jump from $300 million in 2011. It was less than $200 million in 2009.

“In the past few years, their business has taken off,” said Shawn Marlovits, owner of Fleet Feet Sports in Hoboken, N.J. “They are the No. 1 brand in our stores, as they are at most of run specialty. They did a lot of little things right and gained momentum from that. In our stores, Asics had been No. 1, but it had several hiccups, which allowed room for Brooks to sneak in there.”

While it may seem like Brooks crept into the space out of nowhere, Weber likes to repeat the idea that the company is “an overnight success we’ve been working on for 10 years.”

The firm is by far having its best year yet, thanks to work that began in earnest in 2009, when Brooks, a subsidiary of Warren Buffett’s holding company Berkshire Hathaway Inc., invested more heavily in its research and development. It also inked an exclusive multiyear deal with the Rock ‘n’ Roll Marathon series, tripled its marketing budget for print and digital initiatives, deepened the sales staff and broadened its appeal to more-casual runners with the lighthearted tagline “Run Happy.”

Weber said he believes the company is on the fast track to get there. It will do so by sticking with its concentration on performance running shoes and the running community at large.

“Our biggest strength right now is our focus,” said Weber. “We’ve focused on the run for a decade. Around that, we’ve developed leading product, and the product experience is the brand experience year in and year out. That strategy is starting to take hold.”

Consider this: In October 2011, Brooks launched PureProject, a collection of lightweight running shoes that had strong sell-through at retail. Though the line hit the market after the peak of the barefoot craze, retailers said the extra time Brooks took to develop and market the shoes has paid off. Now, a year later, there already is pent-up demand for the second-generation PureDrift style, which lands Jan. 1. The PureDrift is a superlight shoe that features a dual toe-flex, the company’s BioMoGo midsole and removable insole that lets runners choose either a 4-millimeter or zero offset.

“The PureProject product was unlike any of Brooks’ other initiatives, and it has worked extremely well,” said Matt Powell, an analyst with SportsOneSource. “As a company, they have tried to stand out by being different without being too different. Their clever marketing and product, like PureProject, has introduced new runners to the brand. Jim Weber has positioned them to take share in the market.”

It’s no surprise, then, the company also is seeing sales gains across its entire footwear line, with new incarnations of its Adrenaline, Ghost and Trance styles. “Our brand is resonating with runners,” said Weber. “Three years ago, I wouldn’t have said that. Still, we are a well-kept secret to many.”

As it tries to broaden its name and boost revenues, observers said the challenge now for Brooks is grow without alienating its loyal niche of core consumers.

“The time is right for them to branch out into training or walking,” said Powell. “They are a premier running brand in the U.S. and right now there is an opportunity to leverage that into other categories.”

For his part, Weber said the firm is watching other fitness trends. “Walking is part of this run lifestyle,” he said. “Getting people to move is core to our mission, but right now we are not really merchandising walking shoes.”

Weber also noted Brooks will not follow the path of other athletic brands by selling to mass merchants such as Walmart and Target. Instead, it will cement its position within specialty shops, which make up half its business, and within larger retailers including Dick’s Sporting Goods, Finish Line, REI and Nordstrom.

A spokeswoman for Finish Line noted that Brooks continues to offer compelling product that is “supported by great marketing.”

To accelerate growth, Brooks has made moves overseas. Earlier this year the company opened its first Asian subsidiary in Japan, one of the world’s biggest running markets.

“Europe is tracking well for us, but we need to get the Asia-Pacific business moving in the right direction,” said Weber. “We are underdeveloped there. That’s where we have the most opportunity.”

The firm sells its footwear in 60 countries. International sales comprise 30 percent of business.

Brooks also aims to boost revenues from apparel, which accounts for roughly 20 percent of sales. In the first half of 2012, the apparel business rose 29 percent, according to Weber.

“The product has to be there and the service has to be there. That’s the game we are winning at,” said Weber, who will move the company into a new eco-friendly, 120,000-sq.-ft. headquarters in Seattle in 2014. “We’ve got a business model and a focus on the run that is not going away. We’ve earned it, and we will have to continue to earn it to stay there.”