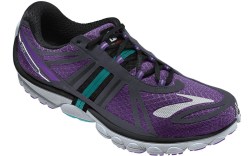 Brooks is aiming for maximum impact with its minimal PureProject line.

The Drift, the newest addition to the popular collection, is a more minimal style than previous looks, said Carson Caprara, footwear product line manager for the Bothell, Wash.-based brand.

“We wanted to push the envelope of that barrier [of minimal and cushioning],” he said. “We wanted to create a maximum ‘feel’ shoe, one that was hyper flexible and extremely lightweight, but still soft enough to be comfortable to run in.”

The Drift, which delivers in January, is the lightest in the PureProject line, weighing 5.6 ounces in a men’s size 9 — 2 ounces lighter than the next lightest Connect style. Like other PureProject shoes, the midsole and outsole are segmented to allow more articulation to the big toe, but on the Drift an additional split allows similar articulation in the second and third toes.

“We looked for where we could split the midsole so the foot could function in its most natural state,” Caprara said. “[In the Drift], the three functional units of your foot are separated, which really amplified the toe flex.”

To encourage that toe splay, Caprara said, the forefoot of the Drift has a “significantly wider shape” than other models in the collection. “We wanted maximum surface area to empower the articulation of the toes and joints to balance the body,” he said.

The Drift also is the first in the collection to have an option for runners looking for zero-drop footwear. The shoes will come with an insole that gives the shoe a 4 mm. heel to toe drop; removing it will leave a zero-drop shoe with 8 mm. of cushioning under both heel and toe.

Available for both men and women and retailing for $100, the Drift is part of the next generation of PureProject shoes. With the Drift, PureProject is now comprised of five styles, all of which will feature a new look on the uppers. Working again with consulting firm Ideo, which was involved in the initial launch last October, Caprara said the company went back out to consumers in Milan, Boston, Munich and other cities for feedback.

The result, inspired by the brand’s flagship sustainable style, the Green Silence, is that the new PureProject uppers are all one piece, with asymmetrical lacing Caprara said delivers a better, snugger fit with a more anatomical shape.

The brand has also revamped the branding on the shoes. It moved the Brooks chevron onto the vamp of the shoe, giving further prominence to the elasticized band that runs across the midfoot, which adds stability and fit.

The Cadence2 and Flow2 styles in select colors will deliver Dec. 1; the Drift, the Connect2 and the Grit2 will deliver Jan. 1. Prices will range from $90 to $120 in specialty running retailers and select sporting goods retailers.