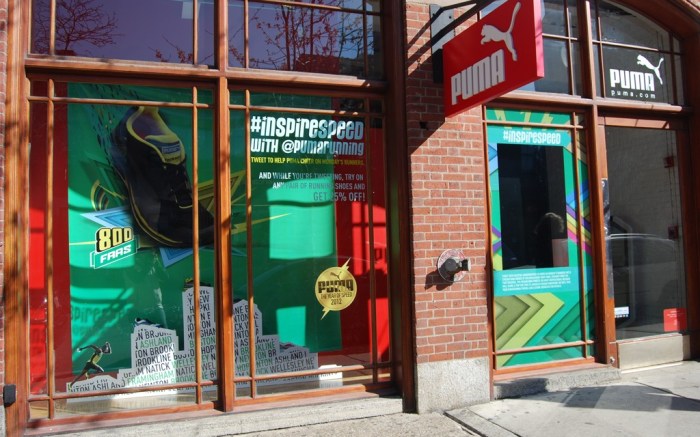 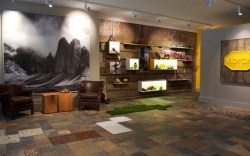 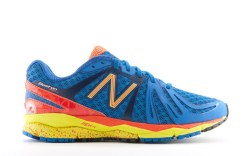 Runners won’t take their marks until Monday in Boston, but the festivities in Beantown have already started. Here, Footwear News rounds up the activity.

Cheer Leading
Not running but cheering for someone instead? Puma has some options for you. Social media fans who tweet messages of support to their favorite runners, or just some inspirational slogans to runners at large, to @puma or @pumarunning with the hashtag #inspirespeed will see their messages streamed in the window of Puma’s store on Newbury Street. (Hint: the message deemed most inspirational will win its author a trip for two to the Reggae Marathon in Jamaica.) And those in town for the race can head to the Herzogenaurach, Germany-based company’s “cheer zone” on the famously foreboding Heartbreak Hill for cowbells, T-shirts and other noisemakers to inspire runners to hit the last 6.2 miles hard.

Vibram’s New Store
Concord, Mass.-based Vibram will open the doors of its first U.S. store on Saturday, giving shoppers the chance to test FiveFingers product on inlaid areas of woodchips, grass and stones. The store will be more than just a retail outlet, however. According to the company, it will also act as a lab for Vibram employees to work with consumers directly.

Staying in Balance
Boston-based New Balance celebrates the 116th marathon with a special makeup of the 890v2 lightweight shoe for men and women that features design details with local favorites like lobsters, Heartbreak Hill and the golden ducks in the Public Gardens. The $110 style went on sale this month at Boston-area retailers including The Tannery, City Sports and Marathon Sports, as well as online at New Balance’s website. It will also be sold at the marathon expo this weekend.

Going Strong
Saucony’s new Find Your Strong microsite intends to inspire runners. The Lexington, Mass.-based company, a division of Topeka, Kansas-based Collective Brands Inc., looks to marry tweets, pictures and video from runners during a 12-week community challenge with mini documentaries on inspiring runners, including Gary Muhrcke, the New York City marathon’s first winner and New York City store owner. And the brand will today kick off a speaker series, featuring Bill Rodgers, Mark Herzlich and others, at The Cyclorama at the Boston Center for the Arts.