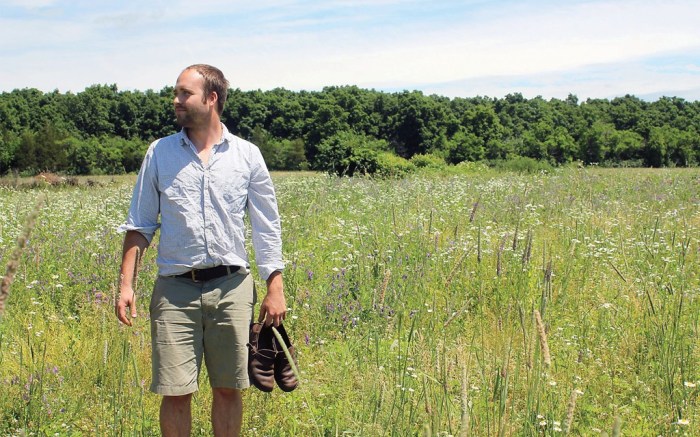 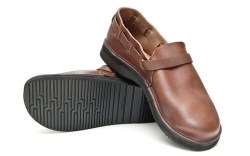 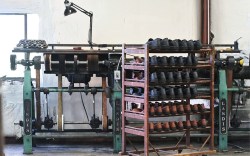 What started as a niche business is ready to reach a larger audience.

Aurora Shoe Co., known since the 1990s for its domestically made, hand-lasted footwear, is now led by 30-year-old entrepreneur David Binns, who traded his engineering career to buy the company in 2010. A fan of the King Ferry, N.Y.-based artisan brand since he was a kid, Binns is now focused on building its name recognition and customer base.

“The business had stagnated for 10 years,” said Binns. “I saw potential. I want to reach more people and get the product [better] known.”

With just 10 employees, Aurora turns out about 20,000 pairs of shoes annually, all made exclusively of U.S. components including Horween leather, Vibram outsoles, brass buckles from SX Industries and nylon thread by American & Efird. And while production has remained virtually unchanged since the company’s founding, Binns recently modernized such processes as dye clocking instead of hand cutting. “It’s still labor intensive,” he said about the 60-step process to complete one pair of shoes. “We’re still particular about picking the right pieces of leather and matching hides. We don’t want to completely mechanize the process. We want to maintain the handmade quality.”

Currently, Aurora offers four styles retailing for $150 to $170. Its most popular item is a unisex slip-on called Middle English. And while the brand is working on a chukka boot, Binns doesn’t want to stray too far from the company’s design roots. “There’s a unique singleness to having fewer styles and choices,” he said. “Loyal customers continue to come back. They’re not looking for something new each season.”

Previously, sales efforts have been focused on Japan, with the line available in 30 stores there. Now, Binns has set his sights on the neglected American market. “U.S. distribution was zero,” he said. “The Japanese love American, handcrafted product.”

Additionally, he has hired industry veteran Barry Ryan as the company’s first sales manager, began exhibiting at trade shows including FFANY and expanded the brand’s online presence. Under Binns, Aurora launched its first website, Aurorashoeco.com, in addition to Facebook and Pinterest pages. On a more grassroots level, Binns has connected to consumers by participating in the June 2012 edition of the Squam Art Fair in New Hampshire, featuring artisan goods from around the world. And in September, the brand will appear at the Northern Grade Men’s Pop-Up Market in Minneapolis, an event focused on menswear made in the U.S.

Already such efforts have paid off. According to Binns, business for 2011 was up double digits over 2010, with the same expected this year.

The initiatives also have boosted brand recognition and wholesale accounts. So far, U.S. retailers including Steven Alan, Footnotes in Manchester, N.H., and Danform Shoes in Burlington, Vt., have come on board, as well as Neighbour in Vancouver, British Columbia, and Union Magazine in Seoul, South Korea. In addition, Aurora sells a small number of shoes out of a company store in its headquarters and on its e-commerce site.

Danform Shoes owner Dave Bailey said his store briefly carried the line in the 1990s. He reconnected with the looks when Binns exhibited at the Boston Shoe Travelers Show in Manchester, N.H., last September. “The shoes haven’t changed much,” said Bailey. “[They’re] for somebody who doesn’t want to look like anyone else. They have their own sense of style and put a premium on comfort.”

At New York-based Steven Alan, buyer Cristin Costello said the line’s Americana story, as well as the overall look, is a key part of its appeal for his customers. “The styles are simple and timeless with a handmade feeling that makes them unique,” said Costello. “They will only get better with age.”

“Some brands target customers by a certain age, income or gender demographic,” noted Binns. “We identify our customers by a particular set of values. To buy handmade is to invest in an art form, a way of life and cultural ideal.”

Charles Millete, owner of Footstock in Portsmouth, N.H., who has been carrying the line since its inception, agreed that the quirky label has a specific customer. “It’s the artsy, fartsy person,” Millete said about the brand’s loyal clientele, many of whom are local craftsman. And, he noted, customers appreciate the ability to have the shoes reconditioned by Aurora.

Case in point: Aurora receives dozens of worn pairs weekly for resoling at a cost of $50 a pair.