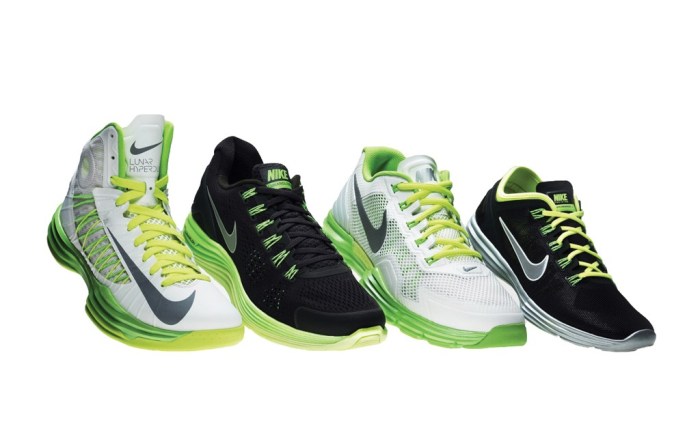 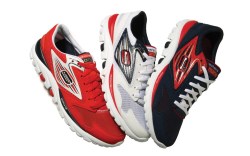 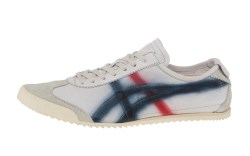 Moon Landing
Lunar is going to the next level. This summer, Nike will release the latest, significantly lighter iteration of its Lunar cushioning, which debuted for the 2008 Beijing Olympic Games. The four training, running and basketball styles (above) will deliver in late June. The Nike Lunarglide+ 4 running style for men and women will retail for $110 and, weighing in at 10 ounces for a men’s size 10, it is 18 percent lighter than the previous version. The men’s-only Nike Hypderdunk is 11.9 ounces and will retail for $140. And in training, Nike will deliver two new styles: the men’s LunarTR1 and the women’s Lunar HyperWorkout+, which will retail for $125 and $110, respectively. The Hyperdunk, the LunarTR1 and the HyperWorkout+ also will be available in versions fitted with Nike’s new FuelBand-compatible Plus technology, which lets users track workout statistics and complete online training challenges. The Plus-enabled shoes will retail for $250 for the Hyperdunk, $240 for the TR1 and $220 for the HyperWorkout.

Run Time
Runners looking to celebrate the upcoming Olympics will be able to pick up limited-edition GoRun shoes in Team USA colors from Manhattan Beach, Calif.-based Skechers this July. In keeping with the GoRun platform, the shoes are lightweight (weighing 6.9 ounces in a men’s size 9), with a flexible midsole and 4-millimeter heel drop. The $80 style for men and women comes in red, white and blue colorways (above), and will deliver to Skechers accounts nationwide.

Keeping Track
Herzogenaurach, Germany-based Puma has expanded its partnership with BMW Motorsport. Last month, the athletic company became the official supplier of all team and race wear for BMW operations, as well as the licensee for footwear, apparel and accessories. While final products have yet to be announced, the company said the line will have a global focus, with a concentration on distribution in the European market, as well as Asia and the Americas.

Japanese Made
Asics is bringing a taste of Asia to the U.S. market. The Kobe, Japan-based brand will introduce a limited-edition collection of men’s sneakers called “Nippon Made” here in June. All the retro styles in the collection are handmade in Japan using high-end leathers, with fewer than 100 pairs of each style available. Priced around $300, the collection will retail exclusively at Barneys New York.