All In at Aldo 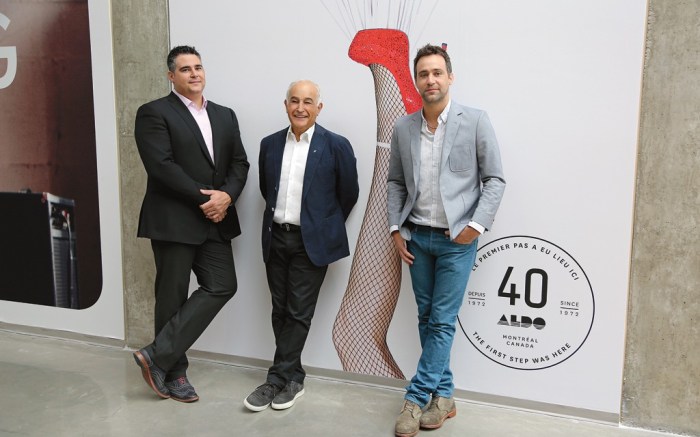 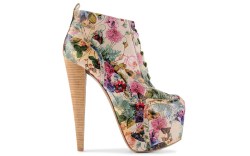 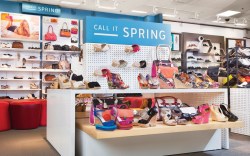 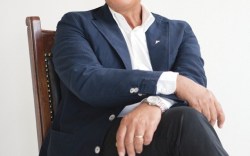 At 7:30 on a recent fall morning, Aldo Group’s headquarters already buzzes with activity. Employees shuffle through the light-filled atrium that serves as the Montreal office’s centerpiece, some stopping in the company’s own Starbucks for a caffeine boost.

Many of them are hard at work planning the firm’s 40th anniversary celebration, one that would span 10 days in October and feature a pop-up exhibit that shared much of the Aldo story with the public. In fact, a few artifacts — such as the brand’s iconic clogs from 1977 — were already on display in the atrium to pay homage to the company’s first four decades.

Such fanfare is rare for the privately owned firm, which has quietly grown its $1.8 billion shoe empire to include 1,600 stores in 80 countries. But now Aldo has an even bigger story to tell. In addition to its vast retail network, the company has carefully expanded into wholesale, licensing, brand building and even high fashion.

“When I started the company, I had big dreams, but I never thought it would be as big as it is today or have the type of influence that it has,” said founder and executive chairman Aldo Bensadoun, 73. “The first thing that comes to mind is the pride I have in our team and what we’ve accomplished.”

Aldo began as a footwear concession in Le Château stores in 1972, developing relationships with factories all over the world and honing its expertise in fast-fashion. (Today, the company needs only 12 to 16 weeks to deliver new shoe styles to stores — or about half that time for a repeat look.) The firm opened its first standalone shop in 1978, kicking off a decade of retail development that included almost 100 openings. It went through another burst of growth in the early 1990s, including entry into the U.S. market in 1993. In 2001, Aldo officially started its push abroad. And more recently, new initiatives have the company pondering where it can go next.

“Everyone here is excited about the variety of growth opportunities,” said David Bensadoun, 42, president of the Aldo Global Retail and Aldo Product Services divisions. “We want them to be healthy, profitable additions to what we’re doing.”

More Than Stores
These days, Aldo Group encompasses four retail nameplates: Aldo, Call It Spring, Little Burgundy and Globo. Flagship label Aldo and the younger and lower-priced Call It Spring line both have international retail components, while Little Burgundy and Globo are multibrand chains located just in Canada. To diversify the business, Aldo Product Services launched two years ago with the goal of adding branded wholesale, private label and licensing.

The Aldo brand is now carried by Nordstom, Zappos.com and Piperlime.com, with Call It Spring also available at Zappos.

“Aldo’s greatest strength, from our perspective, is its 1,600 stores and the knowledge base it brings to the footwear business,” said Tamar Miller, head shoe buyer for Piperlime. “Its store network is an incredible source of trend data. The ability for us to leverage that [information makes Aldo] a highly strategic asset in our business.”

On the private-label side, the firm works with Kohl’s and JCPenney. “It’s an important new business for us, and we see it as a way to grow into the future,” said David Bensadoun. “We’d like to take on one or two more big accounts.”

Licensing, too, has been an area ripe for increasing business. In 2011, the firm partnered with Iconix Brand Group Inc. to produce and distribute Madonna’s Material Girl line and does the same for the pop star’s Truth or Dare label, which debuted this fall.

Neil Cole, president and CEO of Iconix, said the venture already has been a success. “Aldo is recognized as a leader in the industry, [and] quality is of the utmost importance to them,” he said. “One of Madonna’s main concerns when developing this footwear collection was quality, so Aldo was the perfect partner.”

Nordstrom, Zappos and Macy’s picked up the new line. And Selfridges in London opened a five-week shop-in-shop to showcase it, an event that coincided with Madonna’s Hyde Park concert this summer.

The temporary shop, in fact, was the British department store’s most successful in its recent past, said Helen Attwood, buying manager at Selfridges.

“It was really great timing, and we had so much interest because [she’s so famous] as a performer and considered a style icon,” said Attwood. “We were all quite surprised, honestly. Madonna [always has] controversy around her, and there was split opinion in the press about her and her popularity, but it was amazing. We were really pleased.”

The Truth or Dare event was actually the second shop-in-shop partnership this year between Aldo and Selfridges. The retailer also featured Aldo Rise, a program started in 2011 to support fashion designers by giving them access to Aldo’s design team, manufacturing their looks for runway shows and, in some cases, selling them in Aldo stores.

In January, Selfridges featured shoes from Preen, Mark Fast and J.W. Anderson. And the presentation helped introduce Aldo to a new consumer and brought the designers to a more mainstream clientele.

“It would have been unlikely we would have done a pop-up shop with just Aldo shoes because there are stores all along Oxford Street that have them,” said Attwood. “From Selfridges’ perspective, to be able to offer something that has an affinity with the High Street, but is not necessarily available there and is exclusive, is always very interesting to us.”

Preen designers Justin Thornton and Thea Bregazzi first participated in Aldo Rise for spring ’12 and have continued through the last three seasons.

“We love that they can make our imagination real and that they offer fantastic quality at such great prices. The mass appeal Aldo offers is just amazing, and the fact that all these cool girls are wearing our shoes is so exciting,” said Bregazzi. “It introduces new customers to our brand.”

Douglas Bensadoun, 39, creative director and VP of marketing for Aldo Group, said the real motive behind the Aldo Rise program was to become closer to the high-fashion world.

“The impetus was to have a halo effect on the rest of the collection, so the tastemakers of any community who drive trends will have an opportunity to see Aldo flex its shoe design muscles and come up with more aspirational product through those collaborations,” he said. “[Then] they understand the creativity that goes into our shoes.”

Retail Relevance
Despite the fact that the company has moved in so many new directions, David Bensadoun is careful to point out that retail remains the cornerstone of the business.

“We feel there is a lot of opportunity in [these other areas], and we think we can bring a lot [to the projects],” said David Bensadoun. “But retail will always be the main focus. I think 10 years from now, we will still do 70 percent of our sales through retail.”

While multibrand chains Little Burgundy and Globo do well in Canada, the firm has set its sights on growing Aldo and Call It Spring.

To drive expansion at Call It Spring, Aldo signed JCPenney as the brand’s retail partner, opening shop-in-shops in more than 500 doors. Thirty standalone stores are located throughout the U.S., with 40 more set to open next year. (Aldo had agreed to take over the leases of these stores, and 12 others, from Bakers Footwear; however, that deal is now in question due to Bakers’ bankruptcy filing last month.)

“[Call It Spring] is just as important as the Aldo brand, and we want to make sure it resonates,” said Aldo Bensadoun.

Internationally, Call It Spring launched retail locations in Chile, South Africa, Kuwait, Georgia and Azerbaijan this year. The brand also counts 29 shop-in-shops in Debenhams in the U.K., with 19 more to bow in spring/summer ’13.

The major push behind Call It Spring is just part of the global story at Aldo. The company employs a huge ground force in offices around the world that oversees and works with franchisees who run the business in their respective countries (that’s the case everywhere except the U.S., Canada and the U.K., which are managed in-house). And considering the international arm only officially started in 2001, the firm has seen impressive growth.

“We’re talking about compound annual growth rates of at least 25 percent a year, even in these last few years, when we already had a huge number of stores,” said Norman Jaskolka, president of Aldo Group International. “We’ll have about 750 international stores by the end of this year. If we want to keep growing at [that rate], we have to be at [more than] 900 stores by the end of 2013. So this growth rate has been massive from day one.”

Just this year, the company opened 10 additional countries, with two more slated by the end of the year. New additions include Austria, Czech Republic, Lithuania, Bosnia, Macedonia and Germany.

The key, said Jaskolka, is making sure the franchisees are financially compensated for their work and incentivized to contribute to the momentum of the international division. And finding strong partners and areas where the brand is not yet saturated, he added, has helped offset any problems from the European financial crisis.

“We’ve been very strong in Asia for the last several years, but we’re starting to see weakening in the China market,” said Jaskolka. “Latin America has been very good for us. Eastern Europe is very strong. We’re in Africa, so that’s interesting because it’s virgin territory.”

Facing the Future
Last year, Aldo Bensadoun stepped into the role of executive chairman, promoting Réjean Dionne to the position of CEO. The shoe magnate said he has no plans for retirement, but he is slowing down.

“When I’m here, it’s because I know that people enjoy my presence and I enjoy theirs,” he said. “But I like salmon fishing and playing tennis. I love fashion and music, and I travel to the various capitals of the world.”

Diane Brisebois, CEO and president of the Retail Council of Canada, which in the past has awarded Aldo Group with Lifetime Achievement and Distinguished Retailer awards, praised the company for its smooth succession plan. “[Aldo] has expanded by engaging other generations, like his son David, and then also recognized that they needed others to help build the business,” she said. “The company is one of the most successful Canadian retailers, and they have been a great example for others to follow.”

Aldo execs are more tight-lipped about future plans. The firm sets goals every five years, and current initiatives include delving deeper into the digital world (its e-commerce site debuted seven years ago), business management for other brands and keeping the momentum going for existing programs.

And some say it’s just a glimpse of what’s to come.

“In traditional terms, we think of [this milestone] as middle age,” said David Bensadoun, “and it’s so exciting to think of what we can accomplish in the next 40 years.”