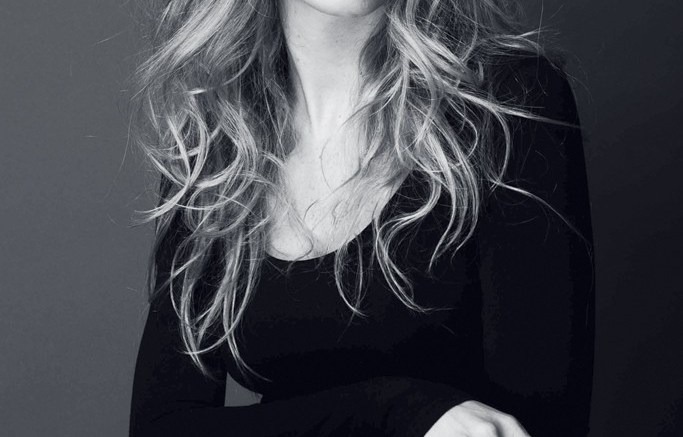 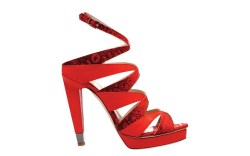 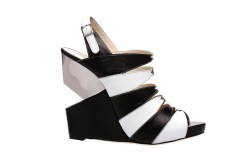 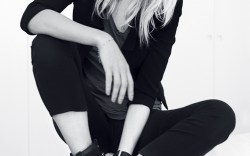 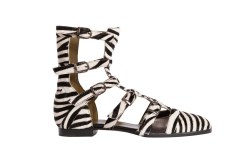 Charline De Luca
Designer: Carlotta De Luca
Age: 25
Debut: Fall ’12
Price: $500 to $700
Look: “Architectural, rigorous and balanced with a touch of femininity.”
Background: A trained architect, De Luca graduated from New York Institute of Technology and worked in Fendi’s retail department before attending London’s Central Saint Martins to pursue a career in shoe design.
Signatures: “My signature heel is inspired by modernist architecture and the work of masters such as Mies Van der Rohe and Le Corbusier. Another signature element is a metal detail on the heel that gives the shoe a sense of sharpness and power.”
Inspiration: “The shapes and volumes in my collection are inspired by the world of architecture and design. For the color palette, I referred to such artists as Mark Rothko.”
On spring: “For spring ’13, I explored working with contrasting materials and textures, from soft leathers to raw raffia, and strong-but-feminine colors such as red and mint green.”
Home base: Rome
Retailers: Saks Fifth Avenue, New York; Saks.com; Luisa Via Roma, Italy; Fiacchini, Italy; Wunderl, Austria


Inga Savits
Age: 38
Debut: Spring ’12
Price: $400 to $800
Look: “Stylish and feminine without having to compromise on comfort and versatility.”
Background: Savits studied fashion design in her native Estonia before embarking on a 15-year modeling career. She worked under Brian Atwood in his Milan studio before launching her eponymous line.
Signature: “Flats. But even if the model is simple, the color or the material should be interesting, so the shoe becomes the most important accessory.”
Inspiration: “I was inspired by the perfect summer day: the sun, the sea, the refreshing [vacation] from the city. [I incorporated] pale yellow karung snakeskin [that looks] like the light at sunrise, washed denim like the shallow water, metallics and Swarovski embellishments recalling the light on the water’s surface. The animal prints, which appear in every collection, pay homage to the wilderness in our hearts.”
Collaborations: Alexis Mabille’s ready-to-wear and couture runway collections for spring ’12, fall ’12 and spring ’13
Home base: Milan
Up next: “Expanding my shoe collection and establishing my brand name in the market. And hopefully opening my flagship store in a year.”
Retailers: Alexis Mabille, Paris; The Patron of the New, New York; Femininrascal.com; La Vetrina, Milan; M32, Belgium; Pez, Madrid

Apologie
Designer: Olivia Cognet
Age: 30
Debut: Fall ’12
Price: $200 to $700
Look: “I wanted to offer beautifully feminine shoes with the best quality possible at an affordable price.”
Background: Cognet, who received her bachelor of arts degree in fashion design, also studied at the Villa Arson contemporary art school in Nice, France. She has experience designing luxury footwear at Carven, Sonia Rykiel, Thierry Mugler and Tara Jarmon.
Inspiration: “Apologie is a Parisian brand and I am inspired by the history of the city. I can find beautiful details on old buildings, like the bow I use on some models, while certain bridges inspired me for the shape of the high heels. I look at Paris as you look at a very luxurious [creation, with serious attention to] details. I like to add small elements that are like the echo of the city.”
On spring: “Like all French people, I love the patisserie: the colors, textures, smells and tastes. I tried to create a full collection based around the cakes, sweets and candies.”
Home base: Paris
Retailers: Kabuki, Paris; Garrice, Paris; United Arrows, Japan; Tomorrowland, Japan; Ron Herman, Japan

Simona Vanth
Designer: Simona Citarella
Age: 33
Debut: Spring ’12
Price: $400 to $700
Look: “The aesthetic is feminine, brutal and sophisticated.”
Background: Citarella attended Central Saint Martins in London and the Italian Istituto Europeo di Design. She has worked with designers including Dolce & Gabbana, Guillaume Hinfray, Fornarina and SixLondon, where she continues to design for brands including Bstore and Opening Ceremony. She co-owns the Wok concept store in Milan.
Signatures: “[I am known for unusual] materials, the flat ballerina Coupe style and [unique] clogs and heels.”
On spring: “The collection plays with the idea of [everyday shoes for] a surreal tourist. The Tourist Limbo collection is focused on experimenting with materials and new shapes, where earth tones mix with black and white.”
Collaborations: Jewelry designer Arielle de Pinto, artist Manon Beuchot and art director Valentina Cameranesi
Home base: Milan
Up next: “I would like to grow the brand through exclusive shops around the world and to [add] a handbag collection and design objects.”
Retailers: Dover Street Market, London; I.T., Hong Kong; Maryam Nassir Zadeh, New York; Totokaelo, Seattle; Ra, Antwerp, Belgium; Wok, Milan; Slam Jam, Ferrara, Italy; Shoescribe.com

Conspiracy
Designer: Gianluca Tamburini
Age: 35
Debut: Spring ’11
Price: $700 to $5,000
Look: “Conspiracy stilettos are assembled on aeronautical aluminum insoles with customizable heels for an authentic sculptural effect. [They are] avant-garde, sophisticated and technological.”
Background: Tamburini studied economics and earned a master’s degree in fashion marketing before pursuing footwear design at Polimoda in Florence in 2007. He was the recipient earlier this year of the prestigious “Who’s On Next” award sponsored by AltaRoma and Vogue Italia.
Signatures: “Groundbreaking materials and technologies that borrow from Formula 1 and aeronautics, such as aluminum with carbon fiber laces and titanium screws [to switch out heels].”
On spring: “[The collection looks at] nature and its elements, organic shapes and materials.
Inspiration: [I was inspired by] the flowing of natural evolution and the rhythmic advance of technology that moves forward.”
Home base: Modena, Italy
Retailers: Summit Club, Beijing; Tikhvin Clubhouse, Ekatirenburg, Russia; Alatir Trade Centre, Ekatirenburg, Russia; by request from the designer