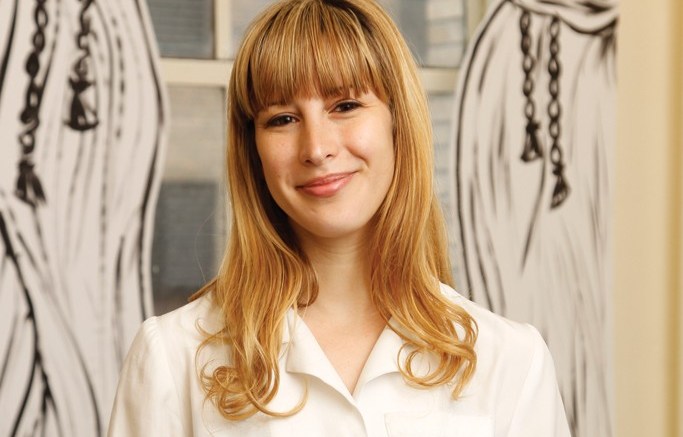 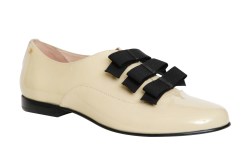 Rachel Antonoff is on a comfort crusade. When most designers are sending their models down the catwalk in sky-high heels, Antonoff prefers a pair of classic Bass saddle shoes. The style naturally complements her apparel, which she describes as appealing to the girl who is “dress-driven and wants to have fun in her clothes. [She is] fun and silly, not at all pretentious.”

Her preference for the iconic Americana look sparked the Bass Loves Rachel Antonoff collaboration, which kicks off its fourth season this fall. “I crave comfort, especially when it comes to my shoes,” said Antonoff. “My day-to-day is often nutty, and I don’t think I could do half the things I do in uncomfortable shoes.”

Antonoff’s namesake ready-to-wear line debuted in spring ’09, after her first label, Mooka Kinney, disbanded in 2007. A longtime fan of Bass, now licensed to Harbor Footwear Group in Port Washington, N.Y., Antonoff said she had always wanted to put her own spin on the saddle style. Polka-dot, glitter and basic black patent versions have been among her signature takes on the shoe. For fall ’12, the partnership goes a step further with such reinterpreted classics as a tuxedo pump with triple grosgrain bows, a duck boot with a translucent shaft and a spectator moc with oversized bow trim.

And Antonoff, who works alongside in-house Bass designer Anita DaSilva, aims to create something for everyone. “We try to always do an option for the more work-friendly, more conservative woman,” she said. “Anita brings me back to earth, [reminding me] we should have a black and a brown, too.”

The designer’s novel take on Bass’ heritage looks has opened the door to retailers including Nordstrom, Free People, Modcloth.com and Tani in New York. The fall collection sells for $129 to $175.

Here, Antonoff shares her passion for turning something old into a fresh and stylish must-have.

What is your take on the heels versus flats quandry when it comes to comfort?
RA: Nothing is less attractive than someone who feels uncomfortable. It never looks good. It conveys insecurity. I resent the concept we have to strap ourselves into torture instruments in order to look good. And for whom? You can look adorable and presentable, feel good about yourself and also feel comfortable. I own heels. I understand how heels make your leg look better. I just love flats. Nothing looks cuter with jeans or a dress than a really stellar pair of flats. It also bums me out that women feel like they have to sacrifice their comfort in order to look great.

How have you managed to balance your fashion point of view with Bass’ heritage aesthetic?
RA: That balance has actually felt really natural to me from the beginning. I’m a longtime fan and customer of Bass, so getting to put my spin on some of the classic styles was a total dream for me. There haven’t been any moments that felt forced in the design process. I feel like it’s a really great fit.

How closely does your ready-to-wear correspond to the footwear?
RA: There have been a few seasons when we’ve tried to take my fabric and use it in the clothes and shoes. We did it with polka dots [for spring ’12]. I really enjoyed having models in one print head-to-toe for my shows. But it can actually be cumbersome in terms of production. And overall, there are very different fabric needs for my line than for the shoes. The shoes stand very much on their own. But it’s all coming from the same place.

Based on the growing interest in your collection, could a companion men’s line be in the future?
RA: Could be. I actually get a ton of requests for the shoes from guys, so if I were to do a men’s line it probably wouldn’t be outrageously different from the women’s collection. My boyfriend tried to squeeze into a pair of the Odettes, a patent leather saddle, but they were too small. And kids’ shoes would be an idea. I get asked about that a lot, too.

Do you like working in tandem with another designer as you do for Bass?
RA: I work by myself [on my own line], so it was uncharted territory. The only thing I could relate it to was a play date when you’re a kid. The first season, when [Anita and I] started design meetings, we had so much fun. We came up with stuff that was eye-catching and exciting. I didn’t necessarily think the [early] floral shoes were groundbreaking, but people were really excited about them. Looking back, the temperature for saddle shoes was welcoming. Vintage is exciting and people were into it.