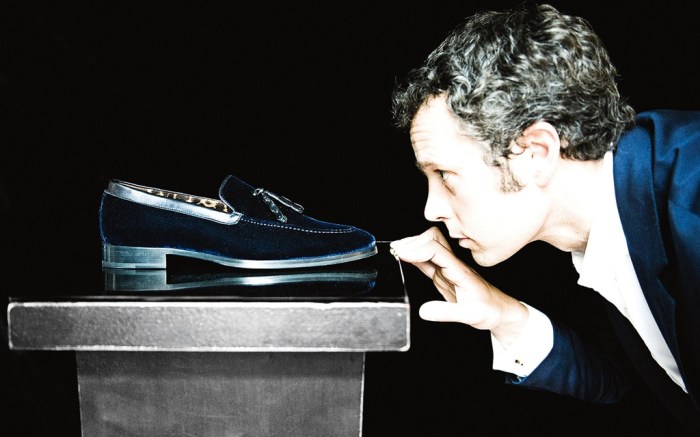 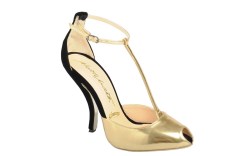 Alberto Moretti has a knack for turning tradition on its head.

When the designer took over as creative director for Italian brand Arfango in 2006, the now 110-year-old label was recognized primarily for its classic leather styles. Moretti promptly shook up the brand, now known as Alberto Moretti-Arfango, by making the staple moccasin out of sumptuous, vibrant Venetian velvets, for men and women. “Velvet is now part of the heart of the label,” he said, noting that his next move was to add more fashion-forward constructions.

In recent seasons, Moretti has pushed the envelope further. Arfango’s fall ’12 collection features a stiletto with a sculptural heel in the shape of a woman’s leg. And the designer’s creations for spring ’13 are equally imaginative, with styles incorporating painted python. Exotic materials and metal detailing are part of the offering for every season, and color is central to both the men’s and women’s lines, which retail from $500 to $1,000. Each season, the label also chooses a provocative phrase to print on the soles of the shoes.

But even with these whimsical twists, Moretti said preserving Arfango’s heritage is as important as keeping the looks fresh. The designer eschews platforms and chunky heels, preferring single soles and streamlined shapes. “I work very hard to keep the styles modern but with an antique touch,” he said. “Sometimes I add a touch of irony or a little joke, but never anything too [obvious].”

Here, Moretti speaks with Footwear News about infusing shoes with sex appeal, the future of Arfango’s retail business and how he even thinks about design while playing polo.

Arfango is still somewhat unknown in the U.S., with styles available at Barneys New York and some specialty boutiques. What is your main market?
AM: We work in the [luxury] niche market, and we do small distribution in many countries. [Our main markets] are Italy, Japan, France, Germany, Spain, Russia, London, Dubai and the U.S. In the States, Arfango has been [carried at] Barneys since 2007, and we have had very good feedback.

Arfango opened its first branded boutique in Saint-Tropez, France, in 2009, a flagship in London last year and a boutique in Forte dei Marmi, Italy, in June. What’s the next retail move?
AM: We have a partner in China that wants to open 15 branded stores in five years, so we have this on the table right now, and we are looking into it. We also want to [have a presence in] Hong Kong. It could be very interesting because it is like the New York of Asia. And for sure, in the future I’d love to have a store in the U.S. It’s a huge market, and [American] customers understand and love Italian shoes. They really like our dandy and more fashion-forward styles.

Where do you seek design inspiration?
AM: I go to beautiful places such as Florence, Milan, Paris and New York. It’s like taking photos with my mind of things that are beautiful, exciting, crazy, fun and even stupid. Traveling and human contact is very important to me, and I use these experiences when creating my collections. What can also be very important is contemporary art. And I always keep in mind [designing for] a sexy, beautiful woman.

In addition to designing footwear, you also have played polo professionally. Does the sport influence your day job?
AM: Yes, in two ways: The sport is very masculine, so that influences the men’s [footwear], but you also have beautiful tournaments with elegantly dressed women. But [when I’m at the polo fields], I don’t think about accounts or numbers, I just think about doing sexy shoes.

What is your main challenge as a designer?
AM: I see the foot [as an extension of] the body, and that means everything must be made very carefully. Everything must be in proportion, and I have to cut [the materials to fit] the best part of the foot to make it look as feminine as possible. That is my challenge with each collection. When I’m doing shoes for women, I try to think of it like putting a dress on a woman and making it as sexy as possible.