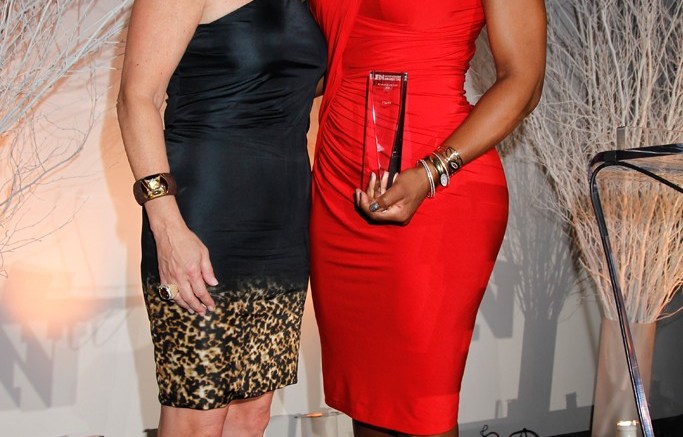 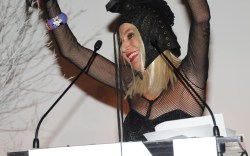 And there were plenty of surprises on Tuesday night at the 25th annual event, held at the Museum of Modern Art in New York and sponsored by FFANY — from the heartfelt tributes delivered by Jessica Simpson (to Vince Camuto) and Serena Williams (to HSN’s Mindy Grossman) to the antics of Patricia Field and Betsey Johnson to an impromptu performance by Manolo Blahnik’s George Malkemus. “Why aren’t all the platforms gone, gone like Kim Kardashian?” the executive sang on stage, to the tune of “Where Have All the Flowers Gone.”

Meanwhile, many attendees — and guests — were star-struck by Mr. Blahnik. “I never thought I would have been [honored] with him. He’s the master,” said Designer of the Year Nicholas Kirkwood. And Rachel Zoe, a co-winner of the Launch of the Year award, said she was “super-excited” to meet the shoe legend for the first time.

A few minutes earlier, Simpson, glowing in a form-fitting crimson dress that showed off her burgeoning baby bump, said she was incredibly grateful to Camuto for his brand-building prowess.

“People call me the billion-dollar baby, but it’s not me, it’s you,” she said to Camuto, who owns the license for the Jessica Simpson brand and won Brand of the Year for his namesake line. But the pair’s relationship goes way beyond work —Camuto even gives her relationship advice now and then.

“I’ve never [received] the stamp of approval until now with Eric [Johnson], so it’s a good thing we’re having a baby,” she quipped. And Camuto expressed the same level of admiration for Simpson. “There are two words to describe her: mighty fine,” he said. “I’m so happy for you and Eric. And I know you don’t know the sex of your child, but if it’s a boy, you can call it Vince.”

Williams told the crowd she understands exactly why HSN was honored with the Retailer of the Year award. “Once Mindy Grossman gets behind any idea … beware,” said Williams, who sported a pair of gold heels by Giuseppe Zanotti.

Later, Betsey Johnson took the stage sporting a customized footwear headpiece and also wore shoes as mittens (adorned with the initials SM and BJ) to present Steve Madden with Company of the Year award. “You saved my ass,” she joked, referring to Madden’s takeover of her company.

In the crowd, Pat Field cheered on her fellow designer, giving her a standing ovation during the presentation.

Earlier, Christian Siriano inducted the stylist into the Footwear News Hall of Fame. The two have both partnered with Payless ShoeSource.

“Without Pat, the world wouldn’t know shoes the way they do,” he said. “Everybody from my 6-year-old niece to my 90-year-old grandma wouldn’t [now] love a pair of Manolos or Jimmy Choos.”

New York Giant’s star Prince Amukamara presented Adidas with the Marketer of the Year honor. To tell the story of his relationship with the brand, the athlete talked about his years playing football “back in the day.” “Although my back in the day is probably different than yours, no offense,” the 22-year-old cracked to the crowd.

Best friends Rachel Zoe and Brian Atwood both accepted awards for Launch of the Year. Zoe began by presenting to Atwood for his B Brian Atwood line. “He’s kind of the most gorgeous thing you’ve ever seen,” she said as she described the first night the pair met, at a club in Paris, dancing on tabletops. “The whole [honor] is surreal, and having the experience with Brian is more than I can imagine.”

Atwood added: “It’s so funny to be presenting with my amazing friend, and I’m having a ball with that.”

Brothers Larry and Jim Tarica were also inducted into the Hall of Fame, as they expressed the “blessing” of working together for 40 years.

And Kenneth Cole, who was honored with the first Icon Award for Social Impact, was introduced by his brother, Iconix Brand Group Inc. CEO Neil Cole, who quipped, “First of all, I’d just like to be clear that I’m the younger brother.”