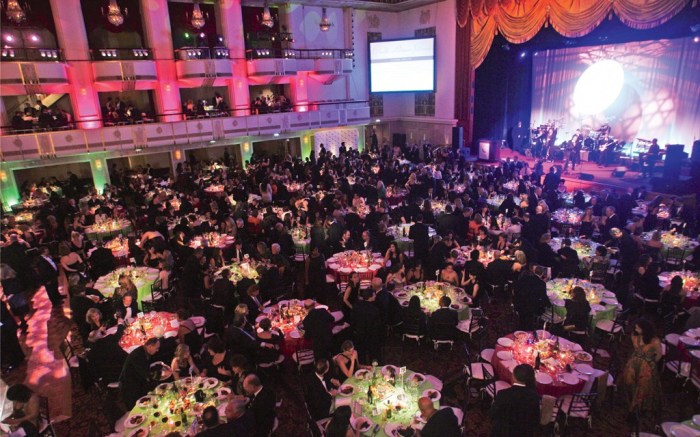 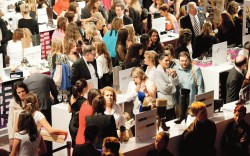 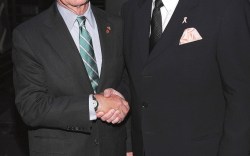 Organizers have pulled in a record number of shoe donations from the industry — roughly 100,000 pairs — putting the event on track to top the $2.7 million raised last year.

“Shoe donations were down the past couple of years [due to the poor economy], but they’ve bounced back,” said FFANY President and CEO Joe Moore. “We worked really hard this year to rally the industry, and we’re very pleased with the results.”

The annual fundraiser is set to return on Thursday to New York’s Waldorf Astoria, with a sit-down dinner and shortened awards presentation, hosted by financial expert and TV personality Suze Orman, who also stars in the 2011 Shoes on Sale ad campaign.

The program will pay tribute to this year’s recipients of the FFANY Jodi Fisher Humanitarian Award: Ambassador Nancy Brinker, founder and CEO of Susan G. Komen for the Cure; and Tim O’Donovan, former chairman and CEO of Wolverine World Wide Inc.

Moore said Brinker, who founded the Komen organization in 1982 in memory of her sister, is well deserving of the award for her significant contributions toward finding a cure for the disease. “Since its inception, Susan G. Komen has donated nearly $2 billion to the breast cancer cause, which is truly incredible, and Nancy has been an integral part of the organization’s success.” Brinker’s presenter had yet to be confirmed at press time.

Tim O’Donovan is being recognized for his many philanthropic efforts, Moore said. In addition to serving on the board of directors of Spectrum Health Services and the Two Ten Footwear Foundation, O’Donovan, along with his wife, Karen, established the O’Donovan Family Foundation, which helps families gain access to medical care, social services, education and the arts. Blake Krueger, who succeeded O’Donovan as head of Wolverine, will present the award to his former colleague.

Shoes on Sale’s popular “Best in Shoes” contest will return this year. A panel of judges including designer Sam Edelman, Nine West creative director Fred Allard and Louise Camuto, president of marketing for Camuto Group, will award prizes to attendees in several style categories. Miss USA Alyssa Campanella will host this portion of the evening.

The event will wrap up with an after-party at 9 p.m., featuring dessert, drinks and dancing. “It will have a bit of a nightclub atmosphere, with a live band,” Moore said. “This is the first time we have organized an official after-party, so we will see how it goes.”

Throughout the evening, guests can shop for half-priced footwear in the newly designed salon area. “We’re updating the room with new furniture and décor to give it more of an elegant, French salon feel,” Moore said. The merchandise selection will focus on higher-end labels, as well as brands from Camuto Group, which this year joins Nine West and Brown Shoe Co. as a Special Pink Benefactor, donating money and footwear inventory valued in excess of $500,000.

And for the second year, QVC’s Shoes on Sale broadcast will air two days after the New York party. Moore said the change proved successful last year and even resulted in a slight increase in sales. But more important, it allowed for a larger charitable contribution.

“It’s very costly for QVC to bring cameras and a big production crew to New York to broadcast the event live,” Moore said. “By QVC doing the show from its own studios [in West Chester, Pa.], it leaves us with that much more money to donate to the cause.”

Mike George, QVC’s CEO, said the two-day gap also gives the network more time to promote the event. “We use our [online] community forums and other social networking tools to build up interest through the Thursday event and then actually draw more [viewers] to the Saturday-night broadcast,” he said. “Our program host will be at the [gala in New York], tweeting and [posting] on Facebook about her experience.”

Saturday’s three-hour broadcast, scheduled for 6 p.m. to 9 p.m., will feature pre-taped footage of celebrity red-carpet arrivals and interviews, as well as the awards program and entertainment. “Focus groups have shown that viewers really like to see the big party going on in New York. They feel like they are part of it all,” Moore said.

Orman, who counsels consumers on money matters, said the Shoes on Sale shopping event makes it easier for people to give back a little at a time when budgets are tight. “[In this economy], not everybody has the luxury or ability to give money to charity,” she said. “This is a wonderful way for people to support a great cause and help others while getting something for themselves. It also encourages people who aren’t inclined to give to give.”

Now in its 18th year, Shoes on Sale, which to date has raised more than $35 million for cancer research, continues to grow in popularity.

“It’s very rewarding to see how far we’ve come,” Moore said. “Shoes on Sale is one of the biggest viewing and selling nights of the entire year for QVC. The event has really built up over the years. It’s an irresistible combination of half-priced shoes and a great cause.”