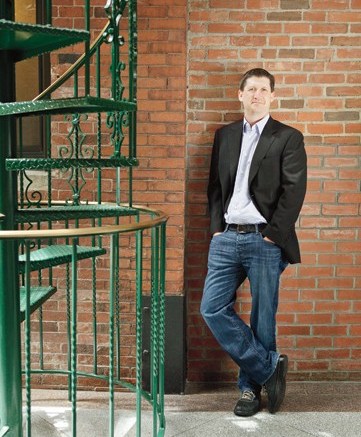 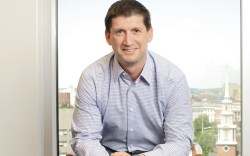 Editor’s note: This interview was conducted before Savitz resigned Monday.

It’s tough work being a revolutionary in Boston. Samuel Adams battled the British, fought taxes and endured critics. Shoebuy.com founder Scott Savitz has pioneered through a dot-com implosion, two recessions and the rise of powerful rivals in a bid to blaze an e-tail trail.

Since founding the Web company in 1999, Savitz has led with a simple formula: Be frugal and be fiercely focused on the customer.

So far, such efforts are paying off, with Shoebuy growing profits at a double-digit rate each of the last 10 years, according to the CEO. The boom in business eventually caught the attention of Barry Diller’s New York-based Internet conglomerate IAC, which purchased the e-tailer in 2006.

From a crowded office in Boston, Savitz today sits atop a company that racks up about $180 million in annual sales. He arrived at this perch by instilling a management philosophy devoted to the idea of having fun, both in theory and in the daily contest with bigger retailers. In a wide-ranging interview with Footwear News earlier this month, Savitz easily rattled off stats about growing 54 percent a year since debuting, averaging 8 million visitors a month and adding about 250 brands to the site last year alone. But in between, he talks with equal passion about family life, company bar nights and the executives who have worked alongside him for most of the decade.

“We have fun around here. That is probably the biggest thing,” said the 42-year-old boss, who raced against employees in a Corporate Challenge event the night before. “At the same time, we’ve stayed extremely entrepreneurial and innovative, and we are completely married to the customer.”

That high-octane enthusiasm has propelled the firm into some of its more recent ventures. In the last 18 months, Shoebuy bowed a comparable version of the site in the U.K., launched a private-event, flash-sale business and expanded into flower sales by partnering with 10,000 farms to deliver fresh arrangements overnight. Savitz said he wants to broaden the company’s platform further by eventually stocking goods in the housewares, fragrances and electronics categories.

The last few years hurt many retailers. How did the economy affect Shoebuy?
SS: We were very fortunate. We grew through the economic recession. In the last four or five years, we tripled revenues. And we plan to stay on a very aggressive growth trajectory. When we started Shoebuy, it was before the dot-com implosion. We went profitable in 2001, when a lot of our peers were closing their doors or running out of money. We’ve always been disciplined and that position works extremely well. During the recession, when companies were pulling back and laying off, we were hiring. When people were cutting costs at the expense of the consumer, we were launching a lot of really fun businesses.

What’s the toughest business decision you’ve had to make during those years?
SS: To be very disciplined and focused, and not do everything [other business were doing]. One reason we’re faring well is because we do things in a very disciplined way, not getting overzealous and doing it right. We want it to be the right customer experience. For example, we launched an iPhone app, we’re launching an Android app and we’re launching a mobile site. But we wouldn’t have launched a mobile site a year ago because we thought [the platform] was too immature at that point.

Is your business better because gas prices are driving people to buy online?
SS: With the positives there are negatives. When oil prices are extremely high, unless people want to get in their cars and drive around, we’re still feeling it with our shipping costs. We offer free shipping and free return shipping, so oil prices, or shipping charges, are our second-biggest line item. But we probably do see some migration when oil prices are high. Our business is in a very consistent and solid growth trajectory, but there are different things that ebb and flow.

What’s your take on today’s consumer?
SS: Consumers expect tremendously good service. I don’t think we can get away with simply being a retailer today. The retailers who didn’t stay very in tune with the customer the last three or four years are paying a very lofty price, and I don’t know if they will ever catch up.

You had to lead through difficult times. How would you describe your management style?
SS: People know I really enjoy what I’m doing, and I really like the people here. I have a lot of fun with our group and I understand a perspective that winning is fun. The business is doing amazingly well, but at the end of the day, we’re not solving the world’s problems. We like to win, but I’m not somebody you see kicking my foot against the wall or running around mad.

What’s your worst trait as a boss?
SS: I like a lot of transparency. I’ll pick up the phone, just like anybody else, and I’ll say, ‘I was shopping and really think we could have done better with this.’ I’m not afraid to talk to a different department. I don’t like when we make bad decisions based on bad assumptions. I don’t have a lot of patience for that.

What should vendors do differently for retailers?
SS: I’d like to see vendors continue to be innovative and entrepreneurial, realizing this is not a competition of retailer to retailer. We all have to do the best job we possibly can to provide a better experience for the consumer. That is what gets the consumer [feeling] passionate and excited about the category and buying more items. It’s not a function of where am I going to buy my one item. It’s getting them very excited about footwear so they’re buying more and more items every year.

Let’s talk competition. There’s a lot, from Zappos.com to flash sales. What’s your take on it all?
SS: It’s very validating because when we launched Shoebuy, everybody thought we were absolutely crazy and nobody would buy footwear online. Online sales are still, as a percentage of total footwear sales, in the very early stages. So the more people who are going online and having a good experience, the better it bodes for something like Shoebuy. On the flash-sale business, there is a lot to glean from that. Some people see these new flash sales businesses and say, ‘Well, [they’re successful] because they’re creating these different types of arrangements and they’re giving 80 percent off.’ What these sites have recognized is you need to sell very good product and the experience needs to be fun. By doing it in this 48-hour, 72-hour timeframe, you’re getting a lot of impulsive buying where people are saying, ‘I’ve got to buy this before it sells out.’ They’re getting an invitation, it’s really kind of fun and neat. There is always more you can do to create a fun experience and a great community with the consumer.

What’s been the best part about selling to IAC?
SS: We are very autonomous. As the company continues to do extremely well, we have been able to run the business very much the way we always have. We’ve been able to learn a lot from having a front-row seat to a number of different businesses that are all very much at the forefront. Seeing what’s working and what’s not working and sharing our practices, that’s been very positive.

Conversely, what do you wish went better?
SS: IAC has been a very innovative company. It’s focused on its customers and very complementary to our business. The more you can learn about what different customers are doing, the more relevant you can become. But it did spin off a bunch of retail properties, and at one point, its main focus was to harness all these different, extremely valuable touch points on the Internet. [By spinning them off], there are fewer properties to glean from.

Where is retail technology heading?
SS: It’s moving fast. There are two sides of the coin. People get so enamored of all these different things we’re seeing in terms of new, fun technology that sometimes they don’t spend as much time on the basics of their businesses. If you’re a website and you’re not conversing well with your customer or they’re not coming back and buying again or they’re not telling their friends, you shouldn’t be launching a mobile site. At the same time, if you are very focused on your business and you let the customer be the driver, it’s going to take you in different places. There is a lot of new technology that can complement what you’re doing. The TV is going to play a bigger role. Having all these different [ways to buy is] going to continue to change.

What do you hope Shoebuy will look like 10 years from now?
SS: Not very different. The growth trajectory is pretty obvious. It’s just a question of milestones, so maybe it would be $1 billion in sales.