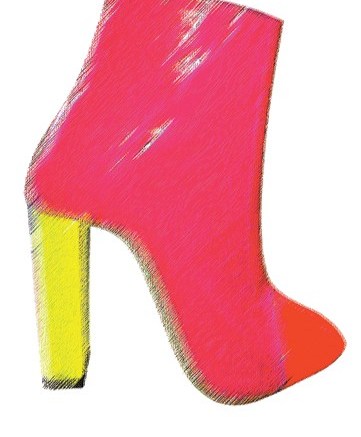 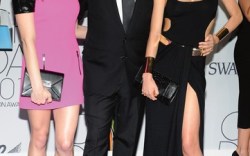 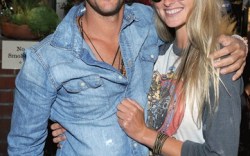 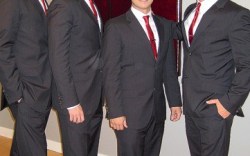 Center Stage
Rihanna opened her “Loud” tour in style earlier this month, belting out “Only Girl in the World” in a pair of Max Kibardin custom patent color-block ankle boots. The designer said he was contacted by Rihanna’s tour stylist, Mel Ottenberg (with whom he’s worked before), back in March, but had no idea what song the shoes were for. “Everything was in absolute secrecy,” he said. “Only Mel knew how they would [style the look] in the end.” Kibardin drew inspiration from an old Versace ad campaign featuring Cindy Crawford in a vinyl trench, giving the boots (shown here as a sketch) the punk-rock vibe that Ottenberg was looking for. Kibardin said he and his 14-month-old daughter are huge fans of the star, so he couldn’t be happier about her footwear choice. “Throughout the spring, we sang and danced together to [her music],” he said. “Nobody could imagine that Rihanna would open her show with that song wearing my shoes.”

Carpet Ready
Rachel Roy is looking for a new partner in crime. Roy told Insider she has enjoyed working with pro surfer Karina Petroni on a footwear collaboration and will most likely turn to a male collaborator next. When asked who was on her radar, Roy said she’s constantly hunting. “I always have a specific man in mind,” she said at last week’s CFDA Awards, adding that her upcoming Paris vacation could be the ticket. “I’m going to walk, eat, shop and be inspired.” Alejandro Ingelmo, who was nominated for the Swarovski Award for Accessory Design but lost to Eddie Borgo, is also looking forward to summer. The designer said he’s jetting off to Barcelona and Ibiza in August. Other big names were also on the scene, including Brian Atwood, Tory Burch and Vince Camuto, who chatted with good friend Elie Tahari. Miranda Kerr also found a friend in Michael Kors (pictured together with Ashley Greene). The Victoria’s Secret model donned the designer’s strappy platforms for the big night. “[The collection] was inspired by Australia, so it was a good fit for me,” joked the Aussie native.

Eagle Eye
Blake Mycoskie is seeing things from a new perspective. The founder of Toms Shoes knows firsthand that eye care can be a life-altering event. “I had eye surgery when I was 22,” he revealed to Insider at the launch event for Toms eyewear in Santa Monica, Calif. “It changed my life, so this is very personal to me.” Mycoskie said his quest to develop a one-for-one business model for eye care (similar to his footwear program) was a demanding journey. The process has been four years in the making, calling for constant travel to Nepal, where the eyewear will launch, and Italy, where the sunglasses are made. So after such a busy schedule, Mycoskie’s personal plans had to take a backseat. “I’m going to [be home] in California for most of the summer,” said Mycoskie (pictured with actress Heather Lang). “Then, I want to do some fly fishing in Colorado.”

Daily Grind
The FN Shoe Star contestants are about to enter the real world. Winner Rachel Fishbein landed the coveted job at Brown Shoe Co., but she isn’t the only contestant with a busy work schedule ahead. Matthew Ciszek, who was in the top three, told Insider he was already hired for a design job at Marc Fisher Footwear, working on the Guess men’s division and the Tommy Hilfiger men’s line, set to bow for spring ’12. And he’s already enjoying the post-competition, post-college schedule. “Even if I get home [late] every night, there is no homework, no Fergie and no Vera Wang,” he quipped about life after Shoe Star and graduating from FIT. Meanwhile, runner-up Keena Fleming didn’t waste any time in her job hunt. The recent grad spent a few minutes chatting with power player Vince Camuto at FFANY’s opening night party. Could the pair be a future match?

Sound Stage
H.H. Brown CEO Jim Issler officially christened the company’s new midtown Manhattan showroom last week with some help from the Midtown Men. The 1960s-style vocal group — and original cast members of the Broadway hit “Jersey Boys” — performed a medley of songs, from The Four Seasons to The Beatles. And according to group member J. Rober Spencer (pictured near left), their love of the era extends to fashion. “We’re encouraging [the return] of suits, cuff links and tie clips. We want to get people excited about dressing up.”