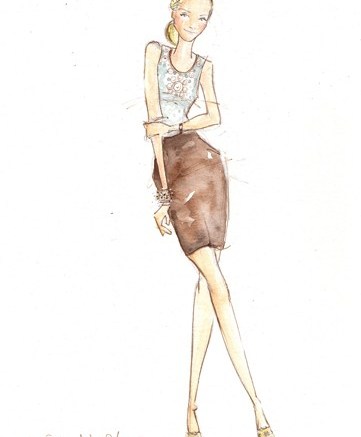 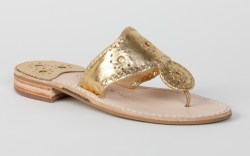 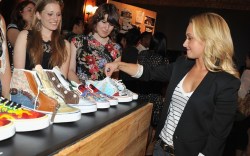 Summer Lovin’
Jack Rogers’ Lauren du Pont is obsessed with accessories. And to discuss her addiction, the brand’s creative director recently hosted a “Lauren Loves” conversation on Twitter about her absolute must-haves when it comes to shoes, bags and everything in between. Footwear News caught up with du Pont to talk summer trends and what’s in store for the Jack Rogers girl.
FootwearNews: Let’s hear it! What’s the “must have” accessory for summer?
JackRogersUSA: I’m really loving the nude trend — an all vachetta Navajo. Will be on our site soon.
FootwearNews: Can’t go wrong with those! What styles are coming along for weekend getaways?
JackRogersUSA: For weekend getaways, an espadrille. We have another exciting Navajo coming up: the Monaco with vintage buttons.
FootwearNews: What’s the best vintage piece you’ve gotten recently?
JackRogersUSA: I’ve just got vintage ’80s hoops from a designer named Dominique at the antiques show in Ridgefield, Conn.
FootwearNews: And which Jacks are best with vintage ’80s jewelry?
JackRogersUSA: The best Jacks for vintage ’80s jewelry are the super-gold Hamptons Navajos or the Marbella Espadrille.
FootwearNews: Is the Jack Rogers girl going anywhere special this summer?
JackRogersUSA: Actually the @JackRogersUSA girl tells me she will be biking around Italy in August … Stay tuned.
FootwearNews: Sounds chic! For inspiration? For shopping?
JackRogersUSA: For fun mostly, but you can find inspiration anywhere.

Design Dreams
Vans is encouraging teens to embrace their artistic sides with the second Custom Culture competition. High school students from across the U.S. were invited to customize and paint Vans sneakers and after receiving over 400 submissions, the final five schools joined together at New York’s Cooper-Hewitt National Design Museum on Thursday, where guest judges included Hayden Panettiere and Mr. Cartoon. “The [level of] work is out of this world,” said Panettiere, who awarded Ward Melville from New York with the $50,000 top prize. Kevin Bailey, president of Vans America, was also on hand and told Insider the elimination process was far from easy (the Vans team narrowed it down to 50 schools and then consumers were invited to vote for the top five). “These kids are so talented. They really stepped it up,” he told Insider. And in addition to the cash prize for the school’s art program, the shoes created by Melville will be produced and hit Vans stores for spring ’12.

Sneaker Champ
NBA player Gilbert Arenas of the Orlando Magic is in a giving mood. The baller announced through his new Twitter handle, @agentzeroshow, that he will give away each of the sneakers he wore throughout the 2010-11 basketball season in an online contest, which starts today. Arenas, who doesn’t have a footwear endorsement, will be giving away 110 pairs in total, including everything from game-worn Air Jordans to Dolce & Gabbanas in a size 13. And for more kicks offerings, Arenas posted a full listing at Sneakerchamp.gilbertarenas.com.