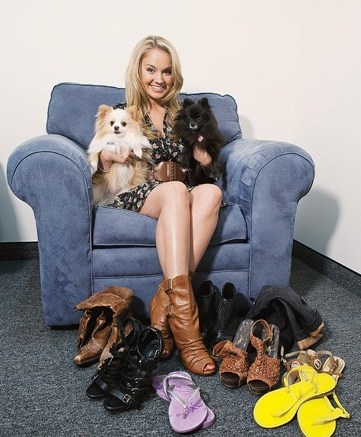 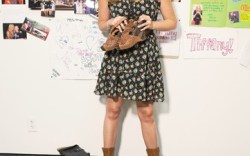 For actress Tiffany Thornton, her love of shoes dates back to childhood. When other kids were running around barefoot, she remembers opting for footwear instead. “I’ve always loved shoes, and I thought it was so grown up to wear them,” she said.

Now that Thornton has matured, the 25-year-old has entered an industry where shoes are constantly in the spotlight, including on her Disney Channel series “So Random!,” where she plays teen queen Tawni Hart. Thornton also has starred in the Disney original movie “Hatching Pete” and made appearances on “That’s So Raven” and “Wizards of Waverly Place.”

Off set, Thornton has a music career as a country singer and co-launched a jewelry line earlier this year at Shopbesobeso.com with friend Jacqueline Brown. The collection has yet to be picked up by brick-and-mortar accounts.

With such a busy schedule, Thornton said she would make time for more if it meant being involved in the shoe industry. “I would love to go into footwear,” she said. “Jessica Simpson is a great role model for businesswomen.”

Personal style: “It’s very eclectic. Being from Texas and a country singer, I have a beautiful pair of Steve Madden boots. My two favorite pairs of black heels are from BCBG Max Azria and Juicy Couture.”

Dream pair of footwear: “Every girl wants a pair of Christian Louboutin heels. I really like the simple beige pumps. They work so well with everything.”

Favorite shoe stores: “Steve Madden always has something I love, and Bloomingdale’s has a fantastic selection. I always want a pair of Michael Kors and Tory Burch sandals.”

Celebrity style you most admire: “Jessica Simpson has a great sense of style. I love her shoes. I wear them all the time on set. They are comfortable and she has a [strong] sense of what girls like.”

Most comfortable pair for between takes: “I have a pair of Nine West gladiator sandals that I’ve had for literally six years. They never fall apart. Or I’m in my Rosegold boots or Uggs.”

Shoes commonly worn off-set: “I’m probably in heels more. I always gravitate toward my black heels because they go with everything. Havaianas are the most comfortable flip-flops, and I like the designs on them.”

Best weekend footwear: “I have a few pairs of Steve Madden sandals, and my Michael Kors sandals are my go-to [shoes]. When I go out, it’s my Juicy Couture or BCBG heels.”

Favorite pair for workouts: “Nike has never failed me. I’m obsessed with Nike tennis shoes. I have a pink-and-white pair that I just love. I can’t give them up.”

Biggest bargain: “Pretty much all my shoes are from Macy’s, or I go online. [Macy’s] has a lot of good sales.”

How does your personal style compare with your TV character’s?
“Tawni loves to wear the tallest heels she can [find]. She’s totally fine in a 7-inch [platform]. She’s a little more bold with color, too. My [collection] is a lot of tan and black, and the pop of color is in my outfit.”